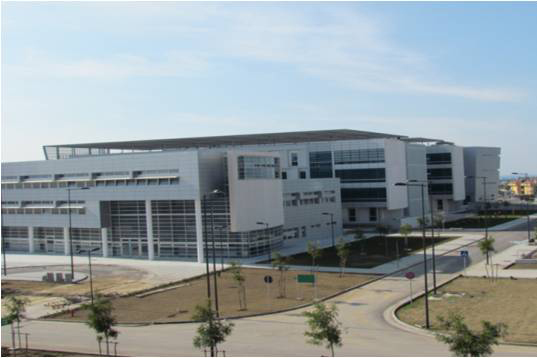 From NATO:  The keys of the new Allied Joint Force Command Naples headquarters in Lago Patria were officially turned over to NATO at a signing ceremony held at the new site May 23, 2012.

The formal transfer of the new site from the Host Nation to NATO was met with distinction and professionalism. Col. Luigi Bodini, JFC Naples Post Commander, a participating signatory in the transfer of possession of the site, added that the new Lago Patria headquarters is the perfect prequel for future civil and military partnerships.

The new NATO headquarters is located just outside of the town of Lago Patria in the region of Campania and will be the home of NATO’s Allied Joint Force Command Naples. The site, more commonly referred to as "Lago Patria,” promises to propel the Alliance’s Naples-based command into the future by providing a bold and technologically savvy home for one of NATO’s most visible commands.

"This new headquarters will provide the services and facilities required by a headquarters which has been assigned challenging and important missions within the future NATO military command structure,” said Bodini.

As nearly six decades of NATO in Bagnoli comes to an end, Dr. Diana Sodano, the command’s community relations officer, emphasized the rich history and magnificent community of which NATO has been a part.

"We can all be proud of our command’s accomplishments,” said Sodano. "Looking forward to the horizon at our future service at Lago Patria, we can be equally proud and excited about the next six decades and beyond.”

Once NATO assumes full control over the new site, NATO officials will make a future announcement regarding a formal "opening ceremony” at the Lago Patria headquarters.  (photo: NATO)