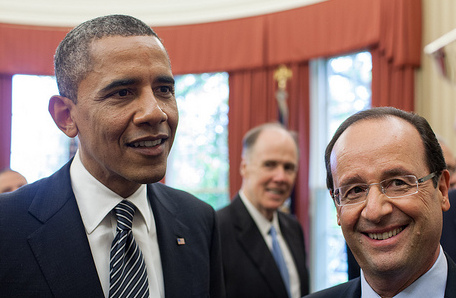 Today, American and French diplomats are preparing for talks with Iran that build on the agreement that has halted progress on and rolled back key elements of the Iranian nuclear program. French and American officials share information daily to combat terrorism around the world. Our development experts are helping farmers across Africa and on other continents boost their yields and escape poverty. In forums such as the Group of Eight and the Group of 20, the United States and France promote strong, sustainable and balanced growth, jobs and stability — and we address global challenges that no country can tackle alone. At high-tech start-ups in Paris and Silicon Valley, American and French entrepreneurs are collaborating on the innovations that power our global economy.

A decade ago, few would have imagined our two countries working so closely together in so many ways. But in recent years our alliance has transformed. Since France’s return to NATO’s military command four years ago and consistent with our continuing commitment to strengthen the NATO- European Union partnership, we have expanded our cooperation across the board. We are sovereign and independent nations that make our decisions based on our respective national interests. Yet we have been able to take our alliance to a new level because our interests and values are so closely aligned. . . .

Perhaps nowhere is our new partnership on more vivid display than in Africa. In Mali, French and African Union forces — with U.S. logistical and information support — have pushed back al-Qaeda-linked insurgents, allowing the people of Mali to pursue a democratic future. Across the Sahel, we are partnering with countries to prevent al-Qaeda from gaining new footholds. In the Central African Republic, French and African Union soldiers — backed by American airlift and support — are working to stem violence and create space for dialogue, reconciliation and swift progress to transitional elections. . . .

Alongside a revitalized alliance on the world stage, we’re also working to deepen our bilateral economic relationship. Already, France is one of America’s top export markets, and the United States is the largest customer for French goods outside the European Union — trade that supports nearly a million jobs in our two countries. Our cooperation in science and education is illustrated by existing partnerships between our universities, top research laboratories and space agencies. But as entrepreneurial societies that cherish the spirit of invention and creativity, we need to do more to lead the world in innovation. . . .

For more than two centuries, our two peoples have stood together for our mutual freedom. Now we are meeting our responsibilities not just to each other — but to a world that is more secure because our enduring alliance is being made new again.