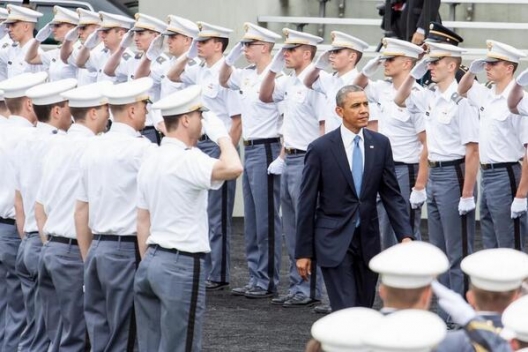 From Europe to Asia, we are the hub of alliances unrivaled in the history of nations.

America continues to attract striving immigrants. The values of our founding inspire leaders in parliaments and new movements in public squares around the globe. And when a typhoon hits the Philippines, or schoolgirls are kidnapped in Nigeria, or masked men occupy a building in Ukraine, it is America that the world looks to for help. (Applause.) So the United States is and remains the one indispensable nation. That has been true for the century past, and it will be true for the century to come.

But the world is changing with accelerating speed. This presents opportunity, but also new dangers. We know all too well, after 9/11, just how technology and globalization has put power once reserved for states in the hands of individuals, raising the capacity of terrorists to do harm.

Regional aggression that goes unchecked, whether in southern Ukraine or the South China Sea or anywhere else in the world, will ultimately impact our allies, and could draw in our military. We can’t ignore what happens beyond our boundaries.

And beyond these narrow rationales, I believe we have a real stake — abiding self-interest — in making sure our children and our grandchildren grow up in a world where schoolgirls are not kidnapped; where individuals aren’t slaughtered because of tribe or faith or political belief.

I believe that a world of greater freedom and tolerance is not only a moral imperative; it also helps keep us safe. . . .

In Ukraine, Russia’s recent actions recall the days when Soviet tanks rolled into Eastern Europe. But this isn’t the Cold War. Our ability to shape world opinion helped isolate Russia right away. Because of American leadership, the world immediately condemned Russian actions, Europe and the G-7 joined with us to impose sanctions, NATO reinforced our commitment to Eastern European allies, the IMF is helping to stabilize Ukraine’s economy, OSCE monitors brought the eyes of the world to unstable parts of Ukraine.

And this mobilization of world opinion and international institutions served as a counterweight to Russian propaganda and Russian troops on the border and armed militias in ski masks.

This weekend, Ukrainians voted by the millions. Yesterday, I spoke to their next president. We don’t know how the situation will play out, and there will remain grave challenges ahead, but standing with our allies on behalf of international order, working with international institutions, has given a chance for the Ukrainian people to choose their future — without us firing a shot. . . .

[W]e built coalitions to respond to a specific challenge. Now we need to do more to strengthen the institutions that can anticipate and prevent problems from spreading.

For example, NATO is the strongest alliance the world has ever known but we’re now working with NATO allies to meet new missions both within Europe, where our eastern allies must be reassured, but also beyond Europe’s borders, where our NATO allies must pull their weight to counterterrorism and respond to failed states and train a network of partners. . . .

America’s support for democracy and human rights goes beyond idealism; it is a matter of national security. Democracies are our closest friends and are far less likely to go to war. Economies based on free and open markets perform better and become markets for our goods. Respect for human rights is an antidote to instability and the grievances that fuel violence and terror.

Excerpts from remarks by President Barack Obama at graduation ceremony, West Point, May 28, 2014.