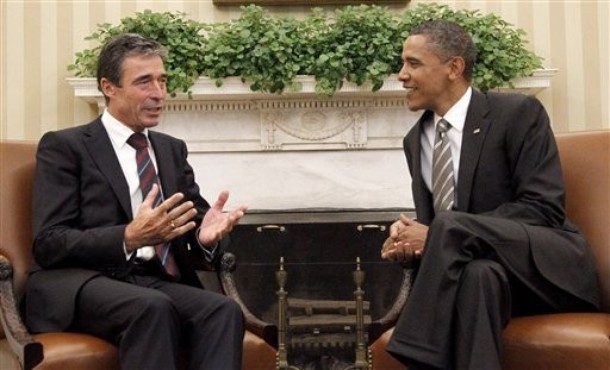 From Anna Mulrine, the Christian Science Monitor:  Tuesday, as [NATO Secretary General Anders Fogh] Rasmussen arrived in Washington to meet with Obama in advance of a November NATO summit, the NATO Secretary General seemed to take this idea a step further, that even “if we transition a province here and there,” soldiers in the area “cannot just leave Afghanistan.”

What’s more, Rasmussen introduced a term that is likely to begin cropping up among Pentagon officials in the months ahead: "transition dividend."

“You may very well see that what you might call a ‘transition dividend’ will be reinvested in other areas,” Rasmussen explains. Troops “might be needed in other regions.” Or, he says, they could be used to bolster training of Afghan police and soldiers. In short, he notes, “Transition doesn’t mean exit.”

From Craig Whitlock, the Washington Post:  Rasmussen said pressure for a quicker pullout has eased since an international conference in Kabul in July endorsed a goal to have Afghan troops take the lead in all security operations by the end of 2014. NATO forces would remain after that to train and advise the Afghans, but in much lower numbers. …

The 2014 timetable, Rasmussen said, has "given some clarity" to NATO members and partners that had disagreed about when Afghan forces should be expected to fend largely for themselves.

At the same time, he cautioned that the timetable – which he variously characterized as "a road map" and "an ambition" – is not set in stone and will depend on how much progress is made in fighting the Taliban.  (photo: AP)

From the White House: Readout of President’s Meeting with NATO Secretary General Rasmussen