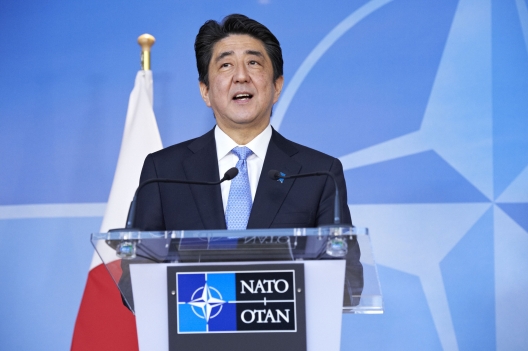 Why Japan and NATO?

Under the “diplomacy that takes a panoramic perspective of the world map” I have been advancing, European countries are partners with which we, together with our ally the United States, share common values. Moreover, NATO is an alliance that transcends the Atlantic Ocean to connect the United States and Europe, espousing the principle of “an alliance based on values.”

A Japan that takes a panoramic perspective of the world map. A Japan that puts the policy of “Proactive Contribution to Peace” into practice to contribute to world peace and prosperity. For this kind of Japan, NATO, which shares our fundamental values, is indeed our “natural partner.”

Together we triumphed in the Cold War, and more than two decades have passed since that time. The security environments surrounding Japan and Europe are each once again becoming increasingly severe.

It is fair to say that the current situation in Ukraine is the greatest challenge for post-Cold War Europe. We cannot accept “changes to the status quo by force or coercion. This is a global issue that also impacts Asia. Japan strongly urges all parties concerned to respect the rule of law and territorial integrity and to behave responsibly with maximum self-restraint. . . .

NATO played a critical role in bringing the Cold War to a victorious ending for the free world. Now, 20 years since the end of the Cold War, democracy and peace continue to be ensured within Europe. Mindful of this, I wish to express once more my respect for the contributions which NATO has made over the years.

Secretary General Rasmussen has demonstrated strong leadership in reinforcing NATO’s partnerships with non-member countries. Japan, a “contact country” when I visited NATO seven years ago, has now become a “partner across the globe. . . .”

Japan and NATO share responsibility in promoting the rule of law on the world’s seas. Strengthening our cooperation within anti-piracy efforts off the coast of Somalia and in the Gulf of Aden will be the touchstone for this.

About six hundred members of Japan’s Self-Defense Forces are currently serving there, and our surface force has to date escorted more than 3,400 vessels. Eighty per cent of those are foreign flag ships having no connection whatsoever to Japanese businesses. These actions are based on Japan’s strong commitment in safeguarding the safety of navigation without regard to national affiliation.

In addition, Japan’s P-3C maritime patrol aircraft cover 60 per cent of all warning and surveillance flights over the Gulf of Aden. To date, we have provided information approximately 10,000 times to relevant countries and organizations, including countries participating in NATO’s Operation Ocean Shield.

Today, Secretary General Rasmussen and I newly decided that Japan will engage in joint exercises with the countries participating in Operation Ocean Shield. Japan is determined to mutually exchange with NATO wisdom and lessons learned and safeguard the seas that support the prosperity of both our regions as well as the world. . . .

I would like to close by asking one more time: Why Japan and NATO?

We are more than simply “natural partners” that share fundamental values. We are also “reliable partners” corroborated by concrete actions.

Based on that kind of relationship of trust, and taking the opportunity of my visit to the NATO Headquarters, I sincerely look forward to Japan turning new pages of cooperation in the months and years to come as a “reliable natural partner” of NATO.

Excerpts from Japan and NATO As “Natural Partners,” speech by Prime Minister Shinzo Abe, May 6, 2014.