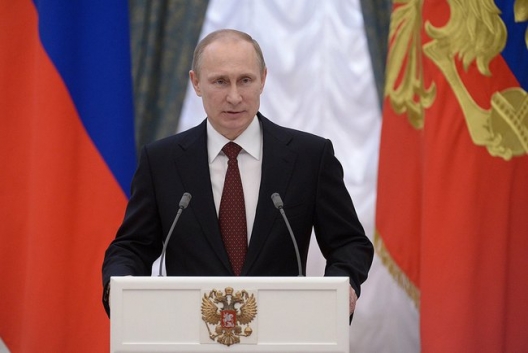 Mr. Putin aspires to restore Russia’s global power and influence and to bring the now-independent states that were once part of the Soviet Union back into Moscow’s orbit. While he has no apparent desire to recreate the Soviet Union (which would include responsibility for a number of economic basket cases), he is determined to create a Russian sphere of influence—political, economic and security—and dominance. There is no grand plan or strategy to do this, just opportunistic and ruthless aspiration. And patience. . . .

Europe’s reliance on Russian oil and gas must be reduced, and truly meaningful economic sanctions must be imposed, knowing there may be costs to the West as well. NATO allies bordering Russia must be militarily strengthened and reinforced with alliance forces; and the economic and cyber vulnerabilities of the Baltic states to Russian actions must be reduced (especially given the number of Russians and Russian-speakers in Estonia and Latvia).

Western investment in Russia should be curtailed; Russia should be expelled from the G-8 and other forums that offer respect and legitimacy; the U.S. defense budget should be restored to the level proposed in the Obama administration’s 2014 budget a year ago, and the Pentagon directed to cut overhead drastically, with saved dollars going to enhanced capabilities, such as additional Navy ships; U.S. military withdrawals from Europe should be halted; and the EU should be urged to grant associate agreements with Moldova, Georgia and Ukraine.

So far, however, the Western response has been anemic. Mr. Putin is little influenced by seizure of personal assets of his cronies or the oligarchs, or restrictions on their travel. Unilateral U.S. sanctions, save on Russian banks, will not be effective absent European cooperation. The gap between Western rhetoric and Western actions in response to out-and-out aggression is a yawning chasm. The message seems to be that if Mr. Putin doesn’t move troops into eastern Ukraine, the West will impose no further sanctions or costs. De facto, Russia’s seizure of Crimea will stand and, except for a handful of Russian officials, business will go on as usual. . . .

Tacit acceptance of settling old revanchist scores by force is a formula for ongoing crises and potential armed conflict, whether in Europe, Asia or elsewhere. A China behaving with increasing aggressiveness in the East and South China seas, an Iran with nuclear aspirations and interventionist policies in the Middle East, and a volatile and unpredictable North Korea are all watching events in Europe. They have witnessed the fecklessness of the West in Syria. Similar division and weakness in responding to Russia’s most recent aggression will, I fear, have dangerous consequences down the road. . . .

Mr. Putin’s challenge comes at a most unpropitious time for the West. Europe faces a weak economic recovery and significant economic ties with Russia. The U.S. is emerging from more than a dozen years at war and leaders in both parties face growing isolationism among voters, with the prospect of another major challenge abroad cutting across the current political grain. Crimea and Ukraine are far away, and their importance to Europe and America little understood by the public.

Therefore, the burden of explaining the need to act forcefully falls, as always, on our leaders. As President Franklin D. Roosevelt said, “Government includes the act of formulating a policy” and “persuading, leading, sacrificing, teaching always, because the greatest duty of a statesman is to educate.” The aggressive, arrogant actions of Vladimir Putin require from Western leaders strategic thinking, bold leadership and steely resolve—now.

Mr. Gates served as secretary of defense under Presidents George W. Bush and Barack Obama from 2006-11, and as director of central intelligence under President George H.W. Bush from 1991-93.