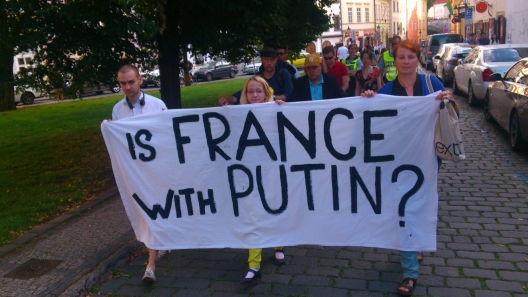 Faced with this new Lockerbie, will we in the West do no more than beg Mr. Putin to provide “free and complete” access to the crash site and offer “full cooperation” in the recovery of remains?

Have we not a moral obligation to draw logical conclusions about a crime for which, because of his incendiary and irresponsible policies, deeply unworthy of the president of a great power, Mr. Putin is, in the end, wholly responsible?

Under the circumstances — with Mr. Putin having not yet agreed to back off in Ukraine, much less in Crimea — how can France morally justify its plan to deliver to Russia two Mistral-class warships, now being fitted out in the western port of St.-Nazaire? Do we want them to become the crown jewels of a Russian fleet off Sebastopol and, perhaps, Odessa?

To see the European Union acting so pusillanimously is very discouraging. France wants to hold on to its arms contracts for the jobs they are supposed to save in its naval shipyards. Germany, a hub of operations for the Russian energy giant Gazprom, is petrified of losing its own strategic position. Britain, for its part, despite recent statements by Prime Minister David Cameron, may still not be ready to forgo the colossal flows of Russian oligarchs’ ill-gotten cash upon which the City, London’s financial district, has come to rely.

In European parlance, this is called the spirit of Munich — appeasement. And it is a disgrace.

Bernard-Henri Lévy, a philosopher, is the author of “Left in Dark Times: A Stand Against the New Barbarism.” This essay was translated by Steven B. Kennedy from the French.