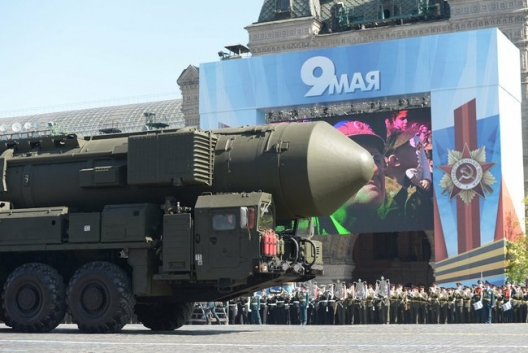 From ITAR-TASS:  Russian military forces will hold live fire drills of missile systems Iskander-M and will test-launch missiles from bombers within the war games planned in missile formations in the Western Military District and the Command of long-range Russian aviation, the press service of the Defense Ministry told ITAR-TASS on Monday.

Tactical military exercises will be held from May 27 to June 5, the press service said. “At the drills, the military forces will deliver ground-based and airborne high-precision weapons’ combined strikes at vitally important facilities of an imaginary enemy,” the press service noted, adding that “a missile formation of the Western Military District armed with tactical missile system Iskander-M and long-range warplanes will participate in the war games. . . .”

“In the planned area, missilemen will drill reconnaissance of maneuvre routes, covert deployment and taking of firing positions and engineering development of the area. At the final stage of war games, they will drill joint actions with the long-range aviation command to hit mocked targets by ground-based and airborne cruise missiles at the maximum possible fire range,” the Defense Ministry said.

From RIA Novosti:  The main objective of the exercise is to train to engage vital targets with high-precision missiles and test the level of preparedness of various control systems and equipment responsible for electronic warfare and intelligence gathering. The efficiency of targeting will be evaluated by unmanned aircraft.

The Ministry of Defense did not specify in which region the exercise was taking place. Earlier the Russian government mentioned a possibility of deploying Iskander missiles to the Kaliningrad region, a westernmost Russian enclave in Europe surrounded by Poland and Lithuania.

From RT:  Russian authorities have repeatedly warned NATO leadership that in case of further deployment of US anti-ballistic missile complexes in Europe, Moscow reserves the right to deploy Iskander-M missile complexes in the Kaliningrad region, Russia’s enclave in Europe. In this case, all of Poland, where the US plans to station its ABM bases, will be covered for a potential launch-through-attack strike.

The threat of having modern missile complexes on its borders, which practically cannot be intercepted, sparked hot opposition from the Baltic States and Poland, which called on Washington to increase US military presence in the region. . . .

Defense Minister Sergey Shoigu finalized the discussion, saying that “on the territory of the Russian Federation we deploy whatever we want, wherever we want.”