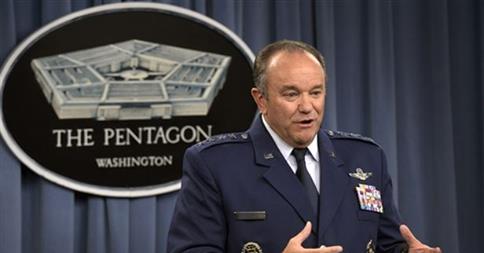 Hundreds of Russian troops are still training and equipping separatists in Ukraine, NATO’s top military commander said Monday, activities that are heightening tensions with the West and Ukraine’s government that were aggravated by Sunday’s elections in the breakaway regions of eastern Ukraine.

As the Russian Foreign Ministry appears to be moving toward recognizing the results of the voting, which was dismissed by the United States as a “sham,” Western officials are increasingly concerned that the Kremlin may be taking the steps necessary to establish an enclave that remains outside Kiev’s control.

During a visit to the Pentagon, the commander, Gen. Philip M. Breedlove, echoed those worries, telling reporters that “I am concerned that the conditions are there that could create a frozen conflict.”

The concern now is that a buffer zone between Ukrainian and separatist forces, established as part of a September cease-fire, may become a de facto border of the new enclave. Meanwhile, the border between eastern Ukraine and Russia has remained open.”

We have seen a general trend towards a hardening of this line of demarcation and much more softening of the actual Ukraine-Russia border,” General Breedlove said.”The Ukraine-Russia border is wide open,” he added. “It is completely porous. Russian equipment, resupply, training flows back and forth freely. . . .”

In total, Russia has seven battalions near Ukraine, down from the 18 battalions — about 20,000 troops — it had there in August. But the forces are enough to maintain Russia’s influence in the area and to buttress Moscow’s efforts to help the separatists.

On Monday, the Organization for Security and Cooperation in Europe reported that pro-Russian fighters had fired on one of its surveillance drones the day before as it was filming pro-Russian forces on the move near a Ukrainian checkpoint. “New drones under fire east of the contact line,” the group said in a post on Twitter.

The organization issued a statement saying the drone was flying at an altitude of about 5,000 feet near Mariupol, in the south of the Donetsk region, on the pro-Russian side of the front. It was filming a civilian truck when “a canvas covering on the back of the truck was removed, revealing a truck-mounted antiaircraft gun, which immediately fired numerous rounds” at the drone but missed.