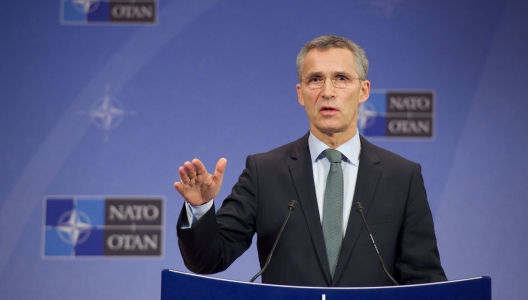 2014 has been a year of aggression, crisis and conflict. But NATO stands strong.

Russia’s aggressive actions have undermined Euro-Atlantic security. While efforts for lasting peace continue, we see a significant military build-up in and around Ukraine. Large transfers of Russian advanced weapons, equipment and military personnel to violent separatists. And a major increase in Russian military activity around Europe and beyond.To the south, violence and extremism have spread across the Middle East and North Africa. We welcome the broad coalition effort led by the United States against the terrorist group ISIL, which is actually already showing results. All allies are playing their part in this coalition against ISIL.

At the Wales Summit, we agreed on a Readiness Action Plan to deal with challenges from both east and south. We are committed to implementing the plan on time and in full.

Tomorrow, we will review our progress and discuss the next steps.

We have already boosted our presence in the eastern part of our Alliance. We have five times more planes in the air. Our forces start an exercise every two days. And we have also increased the number of ships in the Baltic and the Black Seas.

All Allies are contributing. Twenty-eight for twenty-eight.

We are also developing a Spearhead Force, able to respond within days. We are working to stand up this new force in 2016.In the meantime, we are enhancing what we have. I expect that early next year, a number of Allies will provide an interim force with a high level of readiness. This will make us even better prepared to deter and to defend against any crisis arising around our borders.

In Wales, we also made clear our strong support for Ukraine’s sovereignty, independence and territorial integrity.

Despite the challenges, the recent elections were a success. The people of Ukraine spoke loud and clear in favour of democracy, unity and European integration. And NATO will continue to support Ukraine on its chosen path.

At the Summit, we agreed to set up several trust funds. On areas such as command and control; logistics; and cyber defence. And many Allies have been stepping forward to contribute.

Finally, we agreed in Wales, we will open a new chapter in our partnership with Afghanistan, as our combat mission comes to a close.

We have done what we set out to do. Our nations are safer, and Afghanistan is stronger.

The Afghan parliament has now ratified by an overwhelming majority the two security agreements with NATO and the United States. I warmly welcome the vote, which paves the way for the launch of our new mission. Resolute Support is going to be launched on the first of January 2015. This will be a non-combat mission to train, advise and assist Afghan security forces. It reflects the progress we have made together with great sacrifice. And it will enable Afghanistan to build on that progress.

But the new mission is only one aspect of our support. We will also provide funding for the Afghan national security forces. And develop our long-term partnership with Afghanistan.

I am very glad that later on today, I will meet with President Ghani and with Chief Executive Abdullah, who will join us at the ministerial tomorrow.

Their participation underlines the vital importance of our partnership.For Afghanistan, the region, and our own security.

So to sum up, I expect to see four concrete outcomes from this ministerial meeting:

An agreement on continuous NATO presence in the eastern part of our Alliance next year.

The announcement of an interim Spearhead Force to enhance our readiness.

Strong political and practical support for Ukraine. And the launch of a new mission in Afghanistan, the Resolute Support mission.