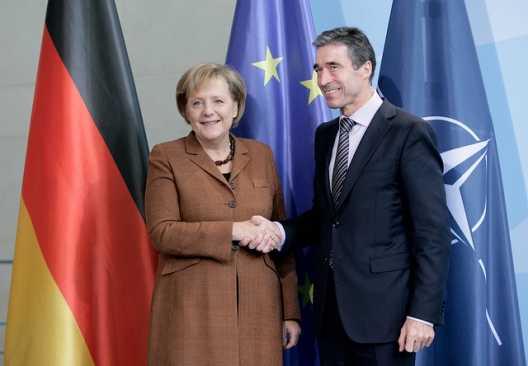 At NATO’s summit in Cardiff, Wales, Germany will be at the center of attention. Not because allies expect bold initiatives or major policy changes from Berlin, but because of Germany’s role as Europe’s undisputed leader. This position, to be sure, is mainly the result of the country’s economic strength. With regard to security and defense issues, Germany remains a reluctant partner. Although it has normalized its troubled post-war relationship to military power, Germany favors economic instruments and political solutions. The EU not NATO is Germany’s preferred organizational framework for crisis management. Yet the Ukraine crisis has emphasized NATO’s pivotal role in European security. Moreover, with the mission in Afghanistan winding down and new areas of instability calling for attention, the Alliance is in the middle of a process of transformation.

Earlier this year, at the Munich Security Conference, Federal President Joachim Gauck called for Germany to take more responsibility in international affairs and members of the Merkel government announced greater engagement. The meeting in Cardiff is an opportunity to follow up on these rhetorical advances. Germany’s positions on three key summit issues will be followed particularly closely: Ukraine, preparedness and Afghanistan.

Concerning the Ukraine crisis – the summit’s top-issue – Berlin is praised for its diplomatic activism but is also criticized for not contributing enough to reassure its eastern allies. Chancellor Angela Merkel and Foreign Minister Frank-Walter Steinmeier have made it clear that they do not support a permanent stationing of NATO forces in Eastern Europe. Germany wants to avoid an unnecessary escalation, it believes is likely to close the remaining channels for negotiation with Moscow. Berlin intents to uphold its traditional position as the alliance’s principal contact point for Russia. At the same time German decision-makers acknowledge the feeling of insecurity among their eastern allies and partners. Moreover, Putin’s intransigence and the shooting down of Malaysian Airline flight MH 17 have challenged Merkel’s patience. In the past months, Germany agreed to intensify air-patrolling in the Baltic region, to lead a mine-sweeping group in the Baltic Sea, and to boost the operational readiness of the multinational corps in Szczecin. Participation in ongoing NATO exercises is considered as well. In Wales the Alliance will discuss to what extent the reassurance measures should become more permanent. They will also debate how to support NATO’s eastern partners. A new “reset” with Russia, however, is not in sight. As Steinmeier told a Polish newspaper: “What our relationship with Russia will look like in future depends to a large extent on Russia’s behavior in the coming weeks.”

The second issue concerns NATO’s preparedness in the long-term. The United States and NATO Secretary General Anders Fogh Rasmussen will, once again, urge European allies to spend more on defense and as usual the main pressure will be on Germany. Also this time, however, Germany will sidestep calls to reach the 2 percent threshold recommended by NATO. Visiting Washington in May, defense minister Ursula von der Leyen did not exclude the possibility of “a slight increase” in the budget, but generally the current level of 1.3 percent of GDP is seen as adequate. Berlin focuses on how the money is spent and insists that increased preparedness has to result from more efficient multilateral cooperation. In Cardiff, the alliance will decide on the viability of a German initiative, the Framework Nations Concept (FNC), launched a year ago. Meant to operationalize the concept of Smart Defense, the initiative proposes to organize allied cooperation in clusters, with one of the larger partners functioning as framework nation. To many allies, the initiative’s main advantage is that it was proposed by Germany, thus committing the country to lead. German politicians and officials have been anxious to point out that FNC should be regarded as a joint project, requiring more than one framework nation. In the run-up to the summit, Berlin has feverishly sought to put together sustainable groups of countries.

Finally, German leaders themselves have an interest in talking about Afghanistan. Visiting Berlin ahead of the summit, Secretary General Rasmussen praised his hosts for their role in ISAF. On August 1st, the Regional Command North, where Germany has led a group of 17 nations since 2006, was transformed into the Train Advise and Assist Command North. Germany was among the first allies to make a commitment for the post-2014 training mission. When asked to do more for international security, German leaders point to their continued engagement in Afghanistan and to the deployment of more than 4000 German soldiers to operations around the world. Germany now needs to look beyond current engagements and should take part in debates about NATO’s future role in operations. Also Germany has a key interest in preserving the Alliance’s operational experiences from past decades while preparing it for upcoming challenges.

At every NATO summit the question arises whether Germany is contributing enough and how the reluctant giant can be moved to punch according to its weight – financially, politically and military. The United States, France, and Britain are right to urge their often complacent and risk averse partner to contribute more. However, if they want what the New York Times describes as “a more useful Germany,” allies should appeal to Berlin’s multilateral reflex. They should propose multinational solutions to which Germany cannot say no, they should accept Berlin’s preference for a comprehensive approach, and they should respond positively to German initiatives such as the Framework Nations Concept. As Carnegie Europe’s Jan Techau recently observed, “Germans dislike violating multinational commitments.” They dislike even more, being perceived as unreliable partners. Pushing the Germans might make them move eventually. Engaging them will bring results more quickly.

Dr. Allers is a senior fellow at the Norwegian Institute for Defense Studies (IFS).