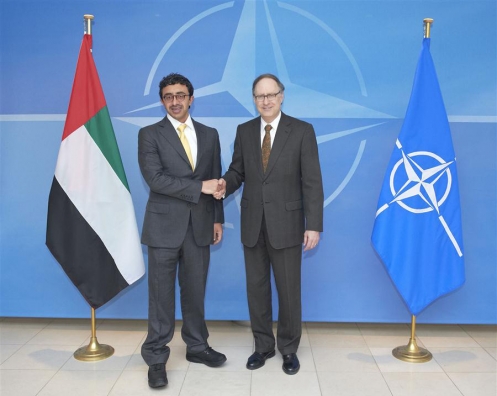 The United Arab Emirates has said and done all the right things to prove that it wants a stronger partnership with NATO. In addition to appointing an ambassador to NATO, the UAE has also supported prominent NATO missions, for example, by contributing airpower to Operation Unified Protector, which defended civilians during the 2011 Libyan civil war, and by participating in the International Security Assistance Force, a program that trains Afghan security forces.

In turn, NATO Secretary-General Anders Fogh Rasmussen has on several occasions expressed his desire to strengthen ties with the UAE and other states in the Gulf Cooperation Council. It is clear what NATO wants from the UAE: help combating terrorism, funding military operations, and protecting regional sea-lanes, energy supply routes, and cybernetworks. It might be less clear, however, what the UAE wants from NATO.

The UAE’s interest in the alliance stems from its pragmatic approach to national security and defense. That approach has a long history in the UAE. When the United Kingdom withdrew from the Persian Gulf in 1971, the country quickly partnered with the United States for regional protection. The US-UAE relationship grew even stronger when, in 1990 and 1991, they officially joined forces to push Iraq out of Kuwait. Then, after the first Gulf War, Abu Dhabi looked to Washington to balance against Iran. On July 25, 1994, the two signed a defense agreement, the terms of which remain classified, and today, the United States considers the UAE to be one of its most reliable partners in the Middle East.

The strength of that relationship notwithstanding, the small but oil-rich Gulf state still wants other security partners to insulate itself from regional volatility. Abu Dhabi prefers not to rely on Washington exclusively, especially since it has had serious qualms about U.S. Middle East policy since President Barack Obama assumed office in 2009. The Gulf Cooperation Council, a political and economic union of Arab states in the Gulf, cannot meet the UAE’s security needs, at least for now, because it is plagued by political rivalry and mistrust, and its military capabilities, though significant on paper, are largely unintegrated. China and Russia would be poor partners as well: the former is too insular and the latter is too hard to trust.

Of course, NATO will not extend its guarantee of collective defense to the UAE, a non-member state. But the UAE’s support of NATO — specifically, its membership in the 2004 Istanbul Cooperation Initiative, which offered Middle Eastern countries a bilateral security relationship with the alliance — has earned the country international prestige. It has also opened up a dialogue between the UAE and the broader transatlantic community on issues of defense and cybersecurity, military education and training, and emergency preparedness. Recently, the UAE has even been able to participate in NATO air defense exercises in Turkey, cooperate with the Turkish navy on maritime security, and teach its cadets military studies at the NATO Defense College in Italy.

But do the UAE’s expectations from NATO end here?

Let’s be perfectly honest: for Abu Dhabi, the real prize is not NATO and its bureaucracy but Washington, London, and Paris, the alliance’s three most influential powers. Given the UAE’s strong and historical preference for bilateral security arrangements, it makes sense that it is establishing a stronger partnership with NATO mainly to further develop ties to the three countries that affect its security the most. After all, the UAE spends most of its defense budget on weapons from — and has its largest defense partnerships with — the United States, the United Kingdom, and France.

By further institutionalizing its relationship with NATO, the UAE hopes to cement the perception among American, British, and French officials that it alone in the region can be counted on. The UAE also hopes that a more robust partnership with NATO could move the country closer to obtaining firm security guarantees, short of Article 5, from Washington, London, and Paris.

The next NATO summit, in Wales this September, presents an important opportunity for the UAE and NATO to delineate their mutual expectations. The two sides should agree that now is the time to move beyond diplomatic niceties and symbolic cooperation and toward calming a rapidly deteriorating Middle East. They will likely also begin to work on an individual partnership and cooperation program that is tailored to the UAE. This is all well and good, but for the UAE it will remain only a means to an end: greater access to decision-making in Washington, London, and Paris — and then, perhaps, a real seat at the NATO table.