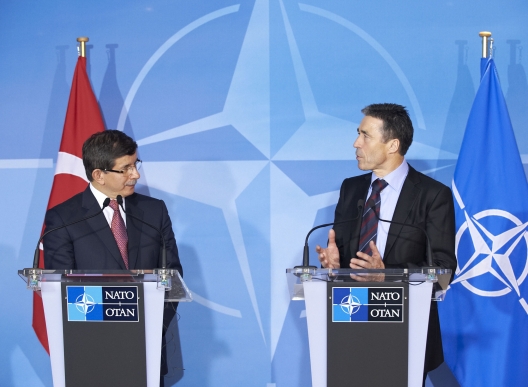 Turkey’s new head of state will participate in the NATO Wales Summit just a few weeks after the country’s first-ever popular vote for president. Though much can happen in the run-up to the August 10 vote (a second round, if necessary, takes place August 24), polls suggest that Prime Minister Recep Tayyip Erdoğan is well ahead of the opposition. If he wins, the NATO trip will likely be his first abroad as president. What approach Erdoğan takes and how he is received by his transatlantic peers, will have lasting implications for US and European relations with Turkey.

Turkey’s relationship with NATO is important because the regional agenda is fluid and uncertain, and none of NATO’s security concerns looms larger today than the turmoil on the Alliance’s southeastern flank, especially Syria and Iraq.

The situation in Syria that in 2012 led NATO to dispatch Patriot missile batteries to Turkey, now looks like more of a chronic ache than an immediate threat. Assad, disorder, and human suffering seem like unpleasant facts of life that will endure in Syria. But for Turks, smuggling and low-level violence along the border are common – and destabilizing. In addition, accommodating over one million refugees poses myriad costs to Turkey. No less important, the Syrian leadership of the Kurdistan Workers Party (PKK) terrorist group remains the stridently anti-Turkish outlier at a time when leaders of Iraq’s and Turkey’s own Kurds are looking for accommodation with Ankara.

And Syria’s disorders have metastasized across the border into Iraq. If Turks have lost their neuralgia about Iraqi Kurdish independence, they regard with greater alarm – as should we – the well-organized, well-funded, and ruthlessly violent militants of the Islamic State of Iraq and Syria (ISIS). Now the self-styled “Islamic State,” this group, with which Turkey may have had some dalliance, seeks to upend a 100 year-old political, economic, social, and religious order in the broader Middle East – a goal whose accomplishment would pose grave dangers to transatlantic and global peace and prosperity. Adding to this bleak picture are fighting between Israelis and Palestinians and uncertainty about the Iran nuclear stalemate and that country’s role in the region.

Though Turkey plays a key regional role, compromised ties with Europe and Washington have gotten cooperation off track. All sides need to remedy this, and US leadership will be critical. Whatever decision gets made about extending the deployment of the Patriot batteries (and their rationale has been overtaken by events) and however Erdoğan and NATO leaders relate to one another, NATO’s and Turkey’s priorities should be to demonstrate a commitment to one another and to security along the NATO/Turkish southeastern front.

Competing thoughts about Erdoğan, Turkey, and the West will muddy that conversation.

Many Americans and Europeans believe that Turkish authorities may have colluded with Sunni terrorists now ranging across Syria and Iraq, including those associated with ISIS. For Washington, Ankara’s dialogue with the Iraqi Kurds, itself a fruit of US policy in the Bush Administration, seems to add to Iraq’s division and weakness. Palaver with the Chinese on a missile defense system has aggravated many. No less important is discomfort with authoritarianism and anti-Western rhetoric in Turkey – and with the underestimation of that discomfort by leaders in Ankara.

For their part, Turkish leaders believe that Western, especially US, leaders have been feckless and undetermined on Syria, guilty of huge mistakes in Iraq, too unwilling to challenge Israel’s campaign in Gaza, and (for Europe) anti-Muslim, including on the matter of Turkey-EU relations. Exclusion from the US-EU Transatlantic Trade and Investment Partnership (TTIP) talks adds insult to injury. If, as Boyden Gray has suggested, TTIP will create the economic counterpart to NATO, then leaving Ankara out seems to undermine the security side of the house. Even Ukraine, an Alliance uniter, divides: if some in the West might tacitly accept Russia’s conquest of Crimea to save pro-Western democracy in Kyiv, Ankara puts priority on the fate of Crimea’s Muslims and on comity with and between Moscow and Kyiv that will ensure Russian natural gas flows freely to Istanbul.

No NATO member save the United States is more important than Turkey to the most immediate security challenges the Alliance faces today. As an Alliance and bilateral priority, the Obama Administration should renew and refocus its outreach to Ankara. Its priority should be to demonstrate Alliance security on the southeastern front and to ensure Erdoğan (or whoever is elected president) sees an important place for Turkey in and with the West. Washington and Ankara should:

• Develop together a near-term plan regarding the Patriot batteries and more sustainable, longer-term arrangements that involve new Turkish capabilities and an appropriate Alliance presence.

• Work out defense technology cooperation arrangements that will help facilitate Turkish decisions on missile defense procurement that add to, rather than subtract from, the Alliance.

• Start a real conversation about relating Turkey to TTIP directly or via a bilateral US-Turkey arrangement.

These kinds of steps will reinforce the vitality of Turkey’s connection to the Alliance as a driver of peace and prosperity in a region on which US and transatlantic security depends.

Ross Wilson is a non-resident senior fellow at the Atlantic Council and was US ambassador to Turkey from 2005-2008.