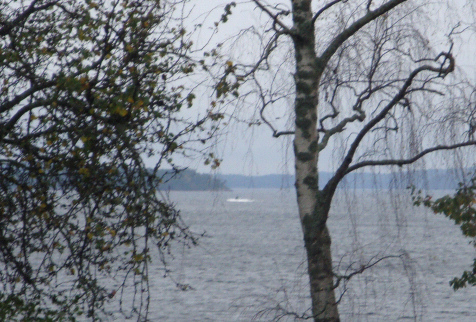 Over the weekend, Sweden launched an Anti-Submarine Warfare (ASW) operation for the first time since the Cold War. Although the government prefers to call it, euphemistically, an intelligence gathering effort, Sweden is vigorously searching for a suspected Russian submarine far inside Sweden’s territorial waters near Stockholm. The Swedish armed forces claim to have made three credible observations of “foreign sub-surface activity” over a 72 hour period, and Sweden’s largest daily broke the news that Swedish signals intelligence had also intercepted emergency communications, hinting at a submarine in distress, between Kaliningrad (the headquarters of Russia’s Baltic fleet) and a transmitter somewhere in the Stockholm archipelago. At the same time, a Russian merchant vessel, the NS Concord, was reported as lying just outside Swedish territorial waters since last Wednesday, as if waiting for something or someone.

The Swedish ASW operation comes right after the end of the multinational naval exercise Northern Archer, where Swedish, Danish, Polish, and Dutch frigates, submarines, and jets practiced, among other things, how to combat a submarine threat. It is not far-fetched to think that the Russian submarine infiltrated into Swedish waters to observe the exercise, record ship signatures, and study the capabilities of the participating units. It is too early to tell if the mysterious submarine has made good its escape or is still in distress inside Swedish waters. Nevertheless, it is clear that Sweden’s on-going ASW operation to locate the submarine will have real implications for Swedish defense and security policy.

The submarine hunt comes at an inopportune time for the Swedish minority government. It is newly installed after a contentious election, and is historically weak by Swedish standards (with only 38% of the seats in parliament). Furthermore, the new government has explicitly written off seeking NATO membership, and has decided to deemphasize Sweden’s partnership with NATO, while focusing on regional defense cooperation and the United Nations structure. The Swedish military is also currently not optimized for the task suddenly put in front of it. Over the last decade it has been trimmed for expeditionary operations in places such as Afghanistan, Kosovo, Bosnia, Libya, and off the Horn of Africa, which has left fewer resources (both time and funding) for tasks such as conventional warfighting and, in the navy’s case, ASW. Indeed, the Swedish armed forces currently face a temporary ASW-capabilities gap, with its old ASW-helicopters scrapped just a few years ago, and the new ones not coming online until 2018. At the same time, the Royal Swedish Navy has shrunk considerably, leaving only nine surface combatants (down from 34 in the 1990s) and five submarines (down from 12 in the late 1990s). The current Swedish submarines and surface combatants are all top of their class, but quantity is a quality of its own when it comes down to endurance and persistent presence in a given area of operations.

Sweden has experienced a vigorous defense debate over the last year, and most parties on both sides of the political aisle agree that there is a need to increase defense spending, and focus on security challenges closer to home. However, little has changed as of yet, except for some limited funding for additional exercises and increased readiness. That will likely change quickly as a result of the submarine incursion. But don’t hold your breath about a sudden shift in the Swedish NATO debate. The current government can hardly retreat from a position it laid out a mere two weeks ago, and it will take a longer period of public debate and discussion to begin to sway Swedish public opinion, which is still very much influenced by Sweden’s 20th century heritage of overt neutrality (but covert cooperation with NATO throughout the Cold War).

But the Swedish hunt for a Russian submarine also has real implications for the broader Nordic-Baltic region. The ASW operation outside Stockholm is merely the latest in a string of events and incidents over the last year. Stockholm was the target of a Russian exercise over Easter in 2013, when Russian bombers flew simulated attack runs against targets in and around the Swedish capital. Swedish and Finnish airspace have been violated on multiple occasions in recent times (photos of some of the incursions can be found on the Finnish air force’s website), and a US RC-135 reconnaissance plane was chased into Swedish airspace by Russian fighter jets earlier this year. In early September, a Swedish-Finnish weather research vessel was buzzed by a Russian navy helicopter, while a Russian frigate maneuvered disturbingly close to the ship. This last incident occurred in international waters, but the research vessel may have gotten too close to a Russian submarine exercise. On the other side of the Baltic, an Estonian intelligence officer was snatched by Russian operatives and taken to Moscow for interrogation. The Baltic Sea region has also been the scene for some of Russia’s largest military exercises in recent years. Finally, in response to the Ukraine crisis, NATO is increasing its own presence in the region, with several exercises intended to demonstrate the Alliance’s ability to come to the defense of its members in the northeast, and the deployment of US forces to the Baltic states to reassure nervous allies.

The Nordic-Baltic region may be emerging as the new “soft spot” in the clash between the transatlantic community and a newly assertive Russia. The Baltic states are some of the weakest members of the Alliance, and, due to their small size, would struggle to generate military power of any size no matter how much they spent on defense. Furthermore, all three Baltic states have significant Russian populations, are dependent on Russian energy supplies, and struggle with the presence of Russian organized crime; all factors used by Moscow to great effect in both Georgia and Ukraine in the recent conflicts there. Meanwhile, Sweden and Finland are quite arguably NATO’s best partners, and may even deliver more than some of the Allies, but both of them fall outside of the Alliance’s Article V collective defense guarantee. In fact, leaders from other Nordic states, as well as NATO and the United States, have made this clear to Stockholm and Helsinki in recent months. This means that the role, and fate, of Sweden and Finland in any security crisis between NATO and Russia in the Nordic-Baltic region is quite unclear.

What the Nordic-Baltic region needs now is more defense spending across the region, in order to quickly close the capabilities gaps that have emerged over a decade of declining funding and a focus on expeditionary operations. This would also send a strong signal to Russia that the Nordic-Baltic nations are quite aware of the changing security climate in the region. NATO must also continue to be present in the region, through exercises and force rotations, and closely monitor security developments there. The Nordic-Baltic region is arguably one of the transatlantic community’s greatest post-Cold War success stories, where, in the early 1990s, the Nordic countries cooperated closely with the United States to nudge Russian forces out of the Baltic states and to set Estonia, Latvia, and Lithuania on a Euro-Atlantic integration path, with NATO and EU membership as the ultimate destination (achieved by the Baltic countries in 2004). The countries of the Nordic-Baltic region, the United States, and NATO must now work to ensure that the success does not one day slip away.

In fact, NATO officials and other Nordic states, as well as the United States, have made this clear to Stockholm and Helsinki in recent months.
Northern Europe Russia