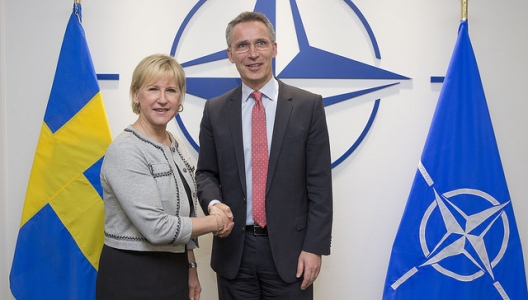 The arguments in favour of Sweden’s joining Nato have grown stronger since Donald Trump won the US presidential election, according to the frontrunners to head the Scandinavian country’s next government.

Nato membership is set to be one of the most contentious topics in Sweden’s elections in 2018. The opposition Moderates and their three centre-right allies have all pledged to seek Nato membership, ending more than a century of being outside a military alliance. They lead in the polls and are flirting with the anti-immigration Sweden Democrats, which would solidify their lead further.

Hans Wallmark, defence spokesman for the Moderates, told the Financial Times that Mr Trump’s victory created a “paradox” for Sweden….

“Now we have to rely on a person that is very tricky to read. The arguments for Swedish membership are therefore even higher today. It’s better that we seek the strength in co-operating with 28 countries rather just one nation,” Mr Wallmark said….

Mr Wallmark admitted that Mr Trump’s victory had made the question of whether Nato would welcome Sweden as a member “a more open question”. He added: “It’s important for the White House to give reassurances, not just for the Baltic states but also Sweden and Finland.”