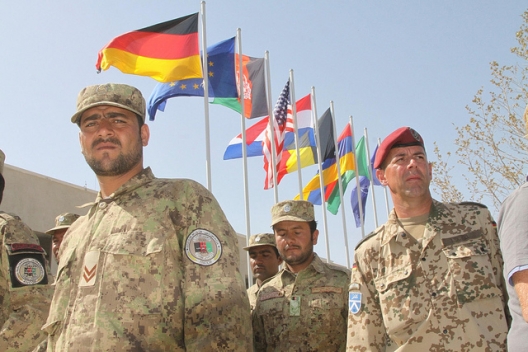 The case for hopefulness on Afghanistan is built largely on what were probably its three most notable developments of 2013 :

●The Afghan army and police held their ground. The number of U.S. troops declined steadily in 2013 and will soon total 34,000, down two-thirds from the peak in 2011. NATO and other international forces have been reduced by a comparable percentage. Last year was the first that Afghan security forces have been in the lead in most operations throughout the country at all times. NATO’s fatality figures, down nearly 75 percent from the peaks of recent years, prove the point. The Taliban made few inroads into major cities and put few major transportation arteries at risk, the occasional spectacular attack notwithstanding. Cities such as Kabul, Kandahar, Mazar-e Sharif, Herat, Jalalabad and Khost are safer today than many Latin American and African cities . No one knows whether Afghan forces, which sustained large losses, can continue to absorb punishment at the same pace. But in broad terms the record has been good so far.

●The Afghan presidential race is shaping up reasonably well. Most major candidates who are polling well are ones the United States, Pakistan and others in the region can live with, including Ashraf Ghani and Abdullah Abdullah. They favor strong, sustained ties with the United States and other nations. . . .

●Karzai, for all his flaws and his frustrating unwillingness to sign a bilateral security agreement, almost surely wants such an accord, which has now been negotiated. He knows that his family will not be physically safe and that his legacy will not be assured if Afghanistan crumbles because of a premature and complete NATO departure. He is most likely seeking, in his own annoying and inimitable way, to preserve bargaining leverage with Washington as long as he can. . . .

At an annual cost of perhaps 10 percent of recent expenses over the past half-decade, and with far lower loss of life, the United States, working with the international community and many Afghan reformers and patriots, has a decent chance of holding on to most of the gains made over the past dozen years — and, crucially, preventing the Taliban from resuming political control of Afghanistan. There is still a powerful case for interpreting the facts in a hopeful vein.

Michael O’Hanlon is a senior fellow at the Brookings Institution and author of “Healing the Wounded Giant: Maintaining Military Preeminence While Cutting the Defense Budget,” among other books.