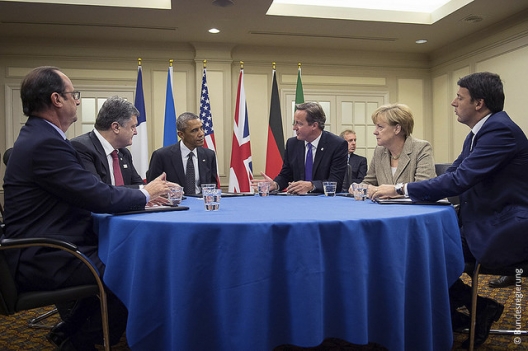 It does not matter whether Khrushchev was wise in giving the Crimea to Ukraine in 1954, or how it came to be that eastern Ukraine is largely populated by native Russian speakers. Nor does it now matter what kind of policy it was prudent to pursue in the 1990s in terms of contemplating NATO entry for countries that had been part of the Soviet Union. Even the events that precipitated the crisis are not important. Such things perhaps used to matter, but we are beyond them now, not least because we cannot go back and mend our judgments even if we wished to do so.

It’s the kind of thing we must understand. And the kind of thing is the dismemberment of a sovereign state, in this case one whose borders were guaranteed thusly under the first article of the Budapest Declaration of 1994:

The Russian Federation, the United Kingdom of Great Britain and Northern Ireland and the United States of America reaffirm their commitment to Ukraine, in accordance with the principles of the Final Act of the Conference on Security and Cooperation in Europe, to respect the independence and sovereignty and the existing borders of Ukraine….

And it is dismemberment not only by economic pressure and subversion, but by violence and invasion, by fire and sword, by kidnapping and murder. That is the kind of thing, and it has happened not in Africa or Asia or South America but in Europe, and it has happened not to a remote monarchy but to a reasonably free state whose sovereign rights are, to repeat, guaranteed in writing by the Great Powers.

And the reaction? Sanctions that mean little, and a nervous shuffling of feet and wringing of hands by the leaders of the so-called free world. The crisis consists just as much, if not more, in the implications of the Western reaction as it does to the aggression that stimulated the crisis in the first place. A case in point: Just a few months ago the new Secretary General of NATO, Jens Stoltenberg, began his tenure with this declaration: “My main message has been, today and for many years, that there is no contradiction between aspiring to a constructive relationship with Russia and at the same time being in favor of a strong NATO.” In an even more invertebrate statement, the German Foreign Minister welcomed the new Secretary General by criticizing his predecessor: “I found some of the things that came in the last weeks from Brussels, from the NATO headquarters, not always helpful. I wasn’t the only one in the German government who felt that way.”

This is not prudence, or diplomacy, or finesse, or the fine-tuning of optics and options. It is cowardice. The Germans have coined the word Russlandversteher—people who understand Russia. It is not a derogatory term, even though the category includes a former Chancellor who has prostituted the dignity of that office by selling himself to Gazprom. It captures a kind of cravenness in the face of aggression that is not limited to a country many of whose leaders are paralyzed by guilt on the one hand and cupidity on the other.

Thus, in the early phases of this crisis British officials made clear that they could not abide sanctions that would make it impossible for the crooked Russian oligarchs who use London as their playground to bank, invest, live, educate their children, and go on debauches in discreet private clubs. It has been only with the deepest reluctance, too, that France has put on hold its transfer of advanced Mistral warships to Moscow—although, of course, the training of Russian crews continues.

The U.S. authorities have been a bit better, but not much. A few more training exercises in the East, yes. But stop shrinking the U.S. Army? Permanently station U.S. ground forces in Poland and the Baltic states? Supply Ukraine with weapons or training to defend itself? No, not yet; and from the looks of things, not at all. And the subsequent reaction to American reserve in Bratislava, Prague, and even Warsaw? To appease the Russians at the expense of NATO solidarity….

The new crisis of the West thus has many dimensions, including some—the steady aging of our populations, for example—about which little can be done. In the proximate case of Ukraine, for example, we could restore adequate levels of defense expenditure, commit forces to the frontline states of NATO, and aid the rump of Ukraine that might otherwise be abandoned to indirect if not direct Russian control. But behind any concrete policy actions there has to be something larger, something deeper, a kind of recovery of spirit. That will be hard, because no leaders seem to be available to offer the inspiration that a de Gaulle or a Churchill did in World War II, or that a Kennedy or a Thatcher did during the spikes of Cold War danger.

Nor am I speaking of political leaders only, or even chiefly. There is no Václav Havel to say “live in truth.” There is no John Paul II to say over and over again, “Be not afraid.” There are precious few intellectuals like Raymond Aron or Isaiah Berlin or Reinhold Neibuhr to explore what freedom means, and speak about how to use it wisely. There are few fierce and fearless journalists like Oriana Fallaci to scream uncomfortable truths at timid politicians.But we can try, beginning perhaps with Havel’s inspiration, by clinging to the truth. We can call things by their names—using words like invasion and fanaticism, for example, and not pretending that they are something tamer and less dangerous….

[I]t is true, and free governments, and free peoples, had better believe these things. They have to believe that freedom is not about ample pensions and free college tuitions and a 35-hour work week, that it is about something vastly deeper and more important than that. One sometimes wonders if belief in big, deeper things itself has gone out of fashion in the postmodern West, as if the larger ideals of the past have somehow become an embarrassment….

[W]hat will get us out of the Ukraine crisis, with any luck at all, is the same thing Churchill invoked some seventy years ago: “Moral health and martial vigor”, and a willingness to take a stand for “freedom, as in the olden time.” Let us not merely hope so, but act now to make it happen.