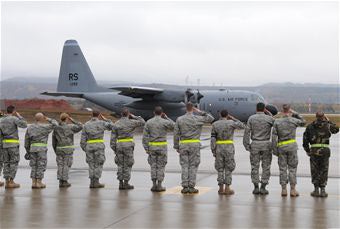 Exhausted by 12 years of costly and indecisive warfare, Americans are no longer willing to stand at the fore-front when their vital interests are not directly at stake. While the U.S. administration has started preparations for the Quadrennial Defense Review 2014, the United States has already indicated its preference for an indirect approach, relying on regional interoperable systems of alliances and partnerships, helping European allies when necessary with capability and intelligence support and favoring a “light footprint” strategy. This indirect approach is often perceived by allies and competitors alike as a new strategic posture of “restraint,” or even “withdrawal.”

The transatlantic partners must engage in a dialogue regarding this U.S. “strategic withdrawal,” real or perceived, in order to assess the expectations on both sides of the Atlantic. This new order represents a challenge for Europeans, who find themselves deprived of the accustomed U.S. support in their neighborhood and/or in areas of vital interest, and who are concerned about the evolution of a world without a “policeman.”

The Reality behind U.S. Strategic Restraint

Any discussion of the implications of an U.S. “strategic restraint” must begin with an assessment of its contours. The Obama administration has already sent strong signals regarding a “strategic restraint,” on a budgetary (sequestration), operational (planned withdrawal from Afghanistan), and strategic level (as outlined in President Obama’s speech on counter-terrorism given at the National Defense University on May 23, 2013). Is the U.S. “strategic restraint” a reality? What is its scope? How do Americans expect to maintain their capabilities in the context of deep budget cuts? In which areas might they still invest (special forces, drones, internet), and at the expense of which others? . . .

[T]he risk of capability shortage will exist in the future at times of multiple crises (and more specifically in the case of a serious contingency in the Korean peninsula), which will entail that strong and decisive strategic choices be made for the first time since the 1950s. Europe needs to prepare itself for possible engagement in conflicts (out of respect for bilateral treaties, for instance in the Gulf and in Eastern Europe) without U.S. military support. . . .

Recommendations: The Future of Transatlantic Burden-Sharing . . .

•The U.S. strategic posture is a matter of semantics. Whether “withdrawal,” “disengagement,” or “retrenchment,” the right label to describe the situation is a question in itself. What appears clear is that it stems from both a political and strategic choice, and represents a capability-driven phenomenon.  Current U.S. strategy adapts to strategic uncertainty in a world experiencing fundamental changes and power shifts. Nonetheless, the difficulties experienced by the United States today should not be overestimated. Washington’s global strategic position is not as bad as one might think, at a time where many partnerships have actually deepened in Asia and Africa. Moreover, the Western bias tends to underestimate the challenges faced by other powers, and the United States may actually have reached a situation of strategic advantage compared to its rivals.

• In many ways, the United States has not become smaller but the world bigger, and the so-called “Rise of the Rest” has also brought the great weaknesses of the emerging powers to the forefront. The current diffusion of power does not lead to the development of a multipolar world just yet because no other credible poles are emerging and no real rivalry between the potential new great powers is rising. The United States will remain the main security provider on the international scene for a few decades, and even if a power vacuum has resulted from its current strategic posture, it has only revealed the inability of other powers to fill it. However, in times of budget constraints and war weariness, the United States will continue to delay its involvement in future crises until they become a national security interest — with the risk of engaging in a much more costly and complex action in the end.

• More importantly, burden-sharing and division of labor are challenges that are to be resolved within the European Union, with the strategic role of Germany being a key variable. The United States will have a role to play in inciting Berlin to engage in world politics and keeping the United Kingdom within the European Union. A united European partner is essential for the United States in order to reach its objectives of increased multilateralism. Europeans will also have to rethink their traditional crisis-management strategy based on principles and norms, which might not be relevant anymore. U.S. reluctance to intervene may force the West to ignore massacres and atrocities happening in its neighborhood, as is currently the case in Syria. As a result, the European credibility to act according to moral principles would be deeply affected.

• Finally, the transatlantic main challenge will continue to be the management of disorder. The West can deal with crisis and stop chaos from spreading, but often fails when dealing with the aftermath of interventions. The West is able and will be able to prevent Iran from obtaining nuclear capabilities, but outlining a sustainable future for the country after a military intervention remains an issue. The transatlantic partners will therefore try to avoid intervening in order to avoid dealing with uncertain outcome. They have an incentive to help other powers build capacities (“building from behind”) and strengthen international institutions in order to bind them to a predictable and normative framework. This effort will only be possible with a strong transatlantic partnership, and the necessity of a common agenda should be stressed. The successes of transatlantic cooperation at the global level, and the multiple agreements in theory and in practice should therefore not be overlooked.