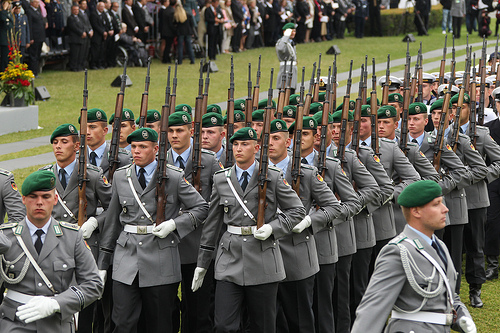 Military power is back as a currency in world politics. A more European Bundeswehr is not a choice but a necessity.

The Bundeswehr is turning 60. While individuals that age may focus on their retirement, the armed forces of Germany face an uncertain future of significant change and greater activity. The international landscape of multiple crises demands more action. Instead of staring at the current crisis of the day, there is a need to react to those key crises that will have a long rem impact on German security policy: the Syria crisis, the Ukraine crisis, and the financial crisis. At the same time, these crises illustrate the three defining conditions German defense policy has to respond to: military power as an instrument of international politics is back; the internal external divide in security is increasingly invalid, the persistently stressed financial state demands that defense ministries continue to search for opportunities to use their means more efficiently via cooperation. Only through joint effort can Europe face the change in the European security order caused by Russia’s use of military force against Ukraine.

Nobody can do it alone

The political rhetoric of calling for “more Europe” reflects the security political and military realities Germany faces. Besides the common argument that the military is a necessary but non-sufficient means of security policy, it is vital to understand that the crises in Ukraine and Syria, the advance of the Islamic State, and the consequences of disintegrating states and terrorism cannot be mastered by any one European state. Further, it needs the effort of all European countries to build the traditional defense measures, such as the ones NATO has taken in the Baltics.

For its defense, the Federal Republic depends on partners. Due to the financial crisis in recent years, Germany (like most European states) has drastically cut down on its military,. Budget cuts of up to 30% are not rare in Europe, and some states have abolished entire defense platforms: for example, the Dutch have given up their tanks and the British their maritime patrol aircraft. Since 2008, the Europeans have lost approximately 25% of their military capability – through cuts and because they have so far not coordinated which capabilities should be abolished and which need to be kept no matter what.

What remains are Bonsai Armies: nice to look at during a parade, but militarily less useful. Cooperation initiatives such as Smart Defense in NATO and Pooling and Sharing in the EU could have stopped the decline in the ability to act. The Europeans could jointly have kept important and rare material (such as Special Forces), and reduce redundant capabilities (such as infantry). To this end, however, everyone would have had to acknowledge that they are only jointly military capable.

The sense of the imperative is only advancing slowly

Indeed, today the Europeans are largely dependent on one another. Since the Balkan wars, deployments are only possible when they act together. These politically unloved dependencies in the operational theatre are no problem on the military level. In fact, the Europeans have been working successfully on the ground for over 20 years. They rely on each other, not only when acquiring water and gas – but also on the front line.

The cooperation is growing ever closer, because combat units are built of more and more nations. If one country contributed one brigade before, this brigade is nowadays made up of battalions from several countries. In addition, there is the international training activity and the numerous command structures, which the EU and NATO have set up – here again, an international, experienced cooperation is emerging. Moreover, there are common structures: NATO takes over air policing tasks, so that the Baltics do not need to maintain an expensive air force, but can invest in other areas. As the peak of the development, the Netherlands are integrating one of their most important brigades into German command structures.

Yet many of these steps occur because of a dilemma: the only option left (after many national missteps) is cooperation with others. What can then be done together is a lot less than what one could do jointly, if one would have acknowledged the foreseeable development of the European defense complex and on those grounds would have decided on a guided Europeanization earlier.

Every German brigade should include some non-German soldiers

With the Framework Nations Concept, Berlin supports the approach, which relies on stronger coordination of European defense capabilities. To this end, there is the need for the political will and a systematic attention to precisely these European facts.

Germany would need to coordinate its national military planning more closely with its partners – not as a fig leaf for the fact that it also follows the political guideline of “more Europe” besides its national visions, but especially as an acknowledgement that organically planned multinational units are the key for the future of the Bundeswehr. On a practical side, this could imply the systematic multilateralization of Bundeswehr brigades: in the future, each brigade would have components from at least one partner. The Bundeswehr would have to adjust to clearly more practical cooperation at times of peace. This implies the conditioning of the troops, linguistically, in the technical training, but also mentally for the fact that just national units will no longer exist in a few years.

Germany is still far from implementing this goal – but already notably further along than others. Thus, a European Bundeswehr also involves walking up to the partners, to convince them of the imperative and to jointly plan the Europeanization.

The Wisdom of the 60-year olds

Politics is the art of the feasible. The military autonomy of states is no longer feasible – but Europe’s military capacity to act is possible if Europeans come together. Above all, it is necessary in light of the return of military power on the world stage. It is not beautiful to have a European Bundeswehr, it is vital. Maybe it needs the wisdom of the 60 year-olds to implement this necessity.

Claudia Major is Senior Associate at the German Institute for International and Security Affairs and Christian Mölling is Senior Resident Fellow at the German Marshall Fund of the United States. Both are based in Berlin.