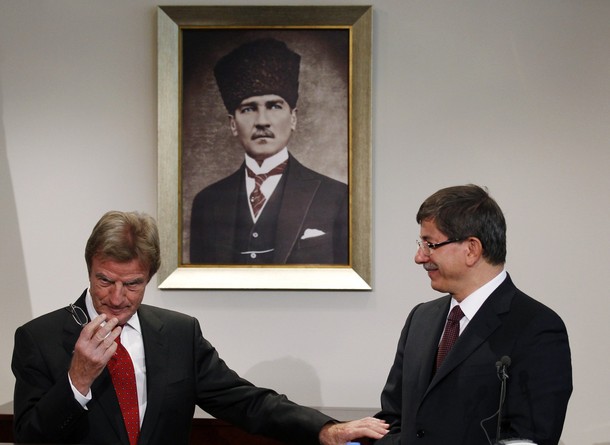 From Fulya Ozerkan, Hurriyet:  Turkey is not a partner, but an owner of NATO, Foreign Minister Ahmet Davutoğlu said Saturday, adding that an agreement within the multi-national alliance is as important as an accord within the European Union.

Speaking to a small group of journalists en route from Xi’an to Shanghai as part of his weeklong China trip, Davutoğlu related a story about how a foreign minister from an EU member state referred to Turkey as an “important partner” during a meeting involving European security and defense policy.

“I told my colleague the hat that should be worn in this meeting should belong to NATO and if he wants to speak with his EU hat on, he should go to another street in Brussels,” Davutoğlu added.

French Foreign Minister Bernard Kouchner is believed to be the EU colleague to whom Davutoğlu was referring.

“That was a pleasant discussion. My friend came later saying he had been misunderstood and we hugged,” the Turkish foreign minister added.  (photo: Reuters)