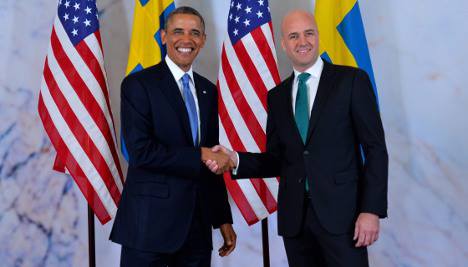 We reiterated our determination to continue working together to promote peace and security around the world.  Our cooperation within the United Nations on peacekeeping, as well as partnership in NATO-led missions such as ISAF and KFOR, contribute to a more peaceful, secure world.  We are committed to developing the relationship between NATO and Partner countries further.  Sweden and the United States are leaders in advancing the critical role of women in achieving international peace and security.  Sweden has generously offered the Nordic Center for Gender in Military Operations for NATO use, and the United States has committed to provide support for the center’s training and education efforts.

We reaffirmed our commitment to seeking a world without nuclear weapons, supporting ongoing efforts on nuclear disarmament and non-proliferation.  We welcome the achievements made through the Nuclear Security Summits to secure nuclear material and reduce the threat of nuclear terrorism. . . .

We emphasized our support for the EU’s Eastern Partnership as a means to help address economic challenges in the region, promote the EU integration of the Eastern European partner countries, and develop democracy, respect for human rights, and rule of law.

We recognized the importance of regional cooperation, including with the Baltic states.

Sweden and the United States are continuing our collaboration on other common foreign policy areas.  Today we have, among other things, discussed the situations in Syria and Egypt.  We are determined to work together to promote respect for human rights, democracy, and the rule of law in Egypt.  With regard to the situation in Syria, we strongly condemn any and all use of chemical weapons.  Those responsible for the use of chemical weapons must be held accountable.

We share the goal of a just, lasting and comprehensive peace in the Middle East, resulting in two independent and democratic states living side by side in peace and security.  Sweden and the United States welcome and support the decision by Israel and the Palestinians to resume final status negotiations, and encourage the parties to continue engaging in good faith negotiations towards this shared goal.

We remain gravely concerned about Iran’s nuclear program and urge Iran to comply with all its international obligations, including full implementation by Iran of UN Security Council and International Atomic Energy Agency Board of Governors resolutions.  We reaffirm our commitment to work toward a diplomatic solution to the Iranian nuclear issue in accordance with the dual track approach.

We urge North Korea to deescalate tensions on the Korean peninsula, commit to irreversible steps leading to denuclearization, and comply with all relevant UN Security Council resolutions and other international agreements.  President Obama expressed his gratitude to the Kingdom of Sweden for serving as the United States’ protecting power in North Korea.

This historic first bilateral visit of an American president to Sweden underscores not only the importance of the U.S.-Sweden relationship, but also the bonds between the United States and all the Nordic countries and the globally significant relationship between America and Europe.