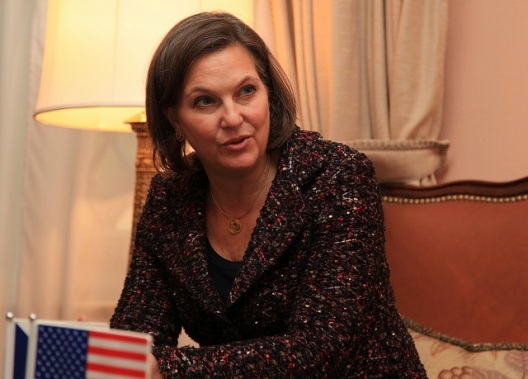 [W]e have not seen the kind of major de-escalation that we’re looking for, nor have we seen serious Russian efforts to help the OSCE, or to speak out against the separatists since Geneva. . . .

President Obama has spoken to President Putin a number of times over the last three weeks, on basically a weekly basis, to try to encourage de-escalation, to try to say to him that there is a better way, that Russia has a choice; but also to make clear that if it continues to destabilize Ukraine and deny Ukrainians the choice to make decisions about their own future, that there will be more costs for Russia: more isolation, and more sanctions. But more broadly, we continue to be concerned that you cannot dress yourself like a firefighter and behave like an arsonist. . . .

[A]s the Secretary said to Foreign Minister Lavrov on the phone today, it is still within Russia’s power to demonstrate that it meant what it said last Thursday. It can assign a senior Russian to go out with the OSCE teams, to make clear to the separatists that they do not have Moscow’s support, to help negotiate them out of these buildings—and if Moscow will do that, then the Ukrainian side will be in a better position to meet its obligations under the agreement, which also include a broad national dialogue about constitutional reforms, other steps to address some of these grievances politically, rather than through arms. But we’ve yet to see Russia put that kind of commitment into stabilizing the east, and that’s what we’re looking for.