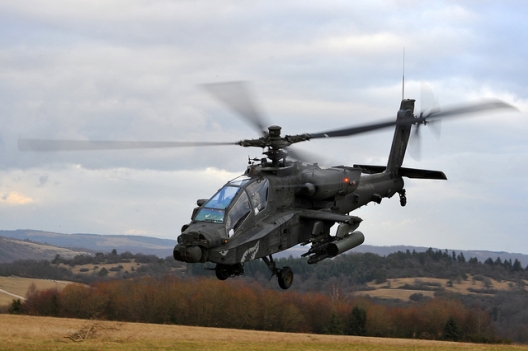 The US Army plans to transfer 24 attack helicopters from Germany to Alaska over the next two years as part of a larger cost-saving aviation plan, according to a senior Army official , but the move could send mixed signals as Washington tries to reassure European allies amid Russian aggression.

Maj. Gen. Gary Cheek, Army assistant deputy chief of staff for operations, plans and policy, told reporters on April 14 that 24 AH-64 Apache helicopters from Germany will join a company, or 12, unmanned Gray Eagles in Alaska by 2017.

“At a time when the US is rightly pressing our European allies to do more, reducing real capability in Europe sends the wrong message — to our allies and to the Russians,” said former US Ambassador to NATO Ivo Daalder, now president of the Chicago Council on Global Affairs. “This is a time when budget decisions need to be reviewed in terms of geopolitical reality — which now includes a growing Russian threat to security in Europe….”

Analyst Magnus Nordenman, deputy director of the Brent Scowcroft Center on International Security at the Atlantic Council, called the the transfer of helicopters out of Europe “a surprising decision” in light of the security situation in Europe and Russia’s aggressiveness. Though not a game changer, “it adds to the uncertainty in Europe around the US role in European security,” he said.

“US allies in Europe are closely watching every move the US makes in terms of forces going in and coming out of Europe, and Russia does as well,” he said. “The move could feed an impression in Moscow that the US is not serious about deterrence in Europe after all, and the allies may also come to doubt US intentions….”

The 12th CAB’s commander, Col. Vincent Torza, said at a conference in Washington in February that Army aviation is a critical component in a “strong Europe.” With frequent rotations to Afghanistan, recent missions have taken elements of the CAB to Kuwait, Iraq and Sinai, as well as exercises in Poland and the Baltics.

“This is my third tour over in Europe and I’ve never been busier, nor have our aviation assets been busier in Europe,” Torza said, adding later: “For us, as the 12th CAB, being right now the current, only Army aviation in Europe, every rotation has an aviation task force from 12th CAB.”