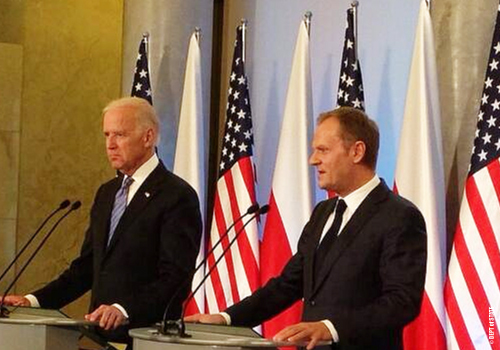 The United States is considering sending troops for war games in the Baltic states bordering Russia, Vice President Joe Biden said on Tuesday in an effort to reassure NATO allies alarmed at the Kremlin’s intervention in Ukraine. . . .

“We are exploring a number of additional steps to increase the pace and scope of our military cooperation including rotating U.S. forces to the Baltic region to conduct ground and naval exercises and training missions,” Biden told reporters after talks with Estonian President Toomas Hendrik Ilves, who was visiting Warsaw. . . .

“Russia has offered a variety of arguments to justify what is nothing more than a land grab,” Biden said. “But the world has seen through Russia’s actions and rejected the logic, the flawed logic, behind those actions.”

Russia said it sent troops to Crimea to protect Russian residents, who it said were in danger in the unrest that followed the toppling of Ukraine’s pro-Russian president. A referendum in Crimea on Sunday backed union with Russia, though the West called that vote a Moscow-orchestrated sham.

Biden said the events in Crimea were a reminder to NATO members that they need to stand together. He said Washington would take additional steps to strengthen NATO.

In particular, he said, the United States stood by its commitment to complete a missile defense system in Poland by 2018. Polish officials view that system as a barometer of Washington’s readiness to underwrite their security.

“Recent events remind us that the bedrock of our alliance remains collective self-defense as enshrined in Article 5 of the NATO treaty,” Biden said. “We take it deadly serious and our commitment is absolutely unwavering and unshakeable.”