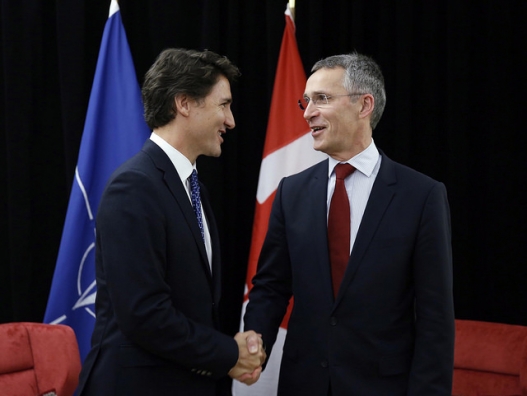 Canada announced at the recent Warsaw Summit that it would deploy at least 450 soldiers to Latvia, becoming one-of-four “framework” nations in a 4,000 person, high-readiness multinational brigade. …

Canada originally intended to play only a supporting role in one of those battalions, according to the sources and documents obtained by CBC News under access to information legislation….

The idea of Canada taking the lead only emerged last spring as it became clear the French military was becoming increasingly stretched — both at home and abroad — following repeated domestic attacks, including the Charlie Hebdo massacre and the slaughter of concert-goers and restaurant patrons in Paris last November.

The state of emergency in France, which had been expected to end later this month, was extended following the attack last week on Bastille Day revellers in Nice.

Prime Minister Justin Trudeau expressed his solidarity with the victims of the latest attack on Monday by signing a book of condolence at French embassy.

France has approximately 7,000 troops deployed domestically on the counter-terror operation known as Op Sentinelle, a heavy burden that has placed “significant strain” on the country’s military, the briefer told Kenney last year.

It became clear last winter that the French were only interested in taking up a supporting role at NATO, and sources say chief of defence staff, Gen. Jonathan Vance, saw an opportunity for Canada a leadership role.

The discussions took place among the military, but quickly elevated to the diplomatic level where both the U.S. and Britain turned to Canada to head up the fourth battalion.

“This wasn’t on our radar until just a couple of months ago,” said one Canadian official, who is familiar with the file, but only authorized to speak on background.

Canada is currently searching for partner nations to fill out its battle group to the estimated strength of 1,000 troops.

Italy, Slovakia, Croatia, Poland, and a combined Portuguese and Spanish contingent, are among the potential troop contributors, according to the sources.