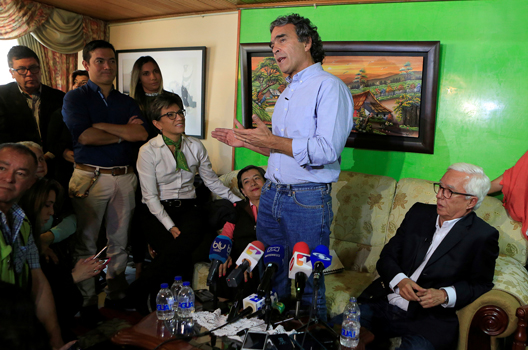 While the influence of Russian disinformation in democratic processes featured prominently in conversations surrounding major election cycles in Europe throughout 2017-2018, another region, further from the Kremlin’s backyard, now faces its own fight against false narratives.

In Latin America, a region that will see three major elections in 2018, the concept of fake news has become a significant concern for policymakers and civil society groups alike. Ahead of elections in Brazil, Colombia, and Mexico, false narratives spread in the news and on social media are now constructed for two purposes: 1) to disseminate lies and 2) to create deep uncertainty or suspicion.

As was seen in the build-up to European elections, these narratives are designed by malign actors to influence the outcome of an election in such a way as sews discord and damages faith in democracy.

Though disinformation is an issue with a long history, merely two years ago, “disinformation” and “misinformation” barely skimmed headlines in the Western hemisphere. While the study of strategic narratives—both how they are formed and how they are projected in international affairs—had been core to the understanding and execution of public diplomacy at embassies and political strategies everywhere, the concept of “fake news” had not yet reached the eyes and ears of the public.

Today, with the Italian elections heavily impacted by disinformation and looming concerns over Russian interference in US midterm elections, discussions of false narratives, disinformation, and misinformation have come to the forefront of policy debates.

Particularly in Latin America, Whatsapp has become a primary platform for the spread of disinformation. This is a particularly effective medium because nearly two-thirds of Brazilian voters have a Whatsapp account.

In Brazil, fake videos, social media accounts, images, articles, and infographics have begun to influence mainstream media and public conversations. While distortion and framing have always been a part of political rhetoric, new technologies have made the use of targeted, false information designed to influence public perceptions easier and more accessible than ever before.

Further, the desire to consume information quickly means there is little to no attention paid to double-checking sources or facts. The prevalence and ease of messaging platforms like Whatsapp creates shortcuts for disseminating misinformation quickly and with an additional element of trust, as most pay heed to who shared the news, rather than where it originated.

Such methods have become increasingly prominent in Colombia and Mexico as well. In Colombia, fake narratives distort facts around the peace agreement between the government and rebels, creating distrust against those that advocate for peace implementation. Meanwhile in Mexico, disinformation continues to influence heated electoral debates, shifting public opinion to certain candidates that may be more polarizing.

How can the public begin to address the spread of fake news? While governments and the private sector in Latin America begin to grapple with new regulations and processes designed to counter disinformation on a structural scale, individuals can take important steps as well to implement bottom-up solutions.

However, in order to do so, some understanding of narratives—what they are and what they do—is necessary for any consumer of information.

As written in Strategic Narratives: Communication Power and the New World Order: “Narratives to do not just present information to us about a problem, a cast of actors, a causal transformation required to overcome a problem, and a desired end state. Narratives ask us to judge the nature and gravity of the problem, the character of the actors involved, and what kind of future would be preferable. Narratives engage us on an emotional level.”

Narratives are not neutral, but designed to sway the opinion of readers. When malign actors deploy false narratives designed to shift public opinion and interfere in electoral processes, democracy suffers as a result.

With major elections looming, citizens in Latin America must work toward becoming informed and critical consumers of information. The following three lessons can guide individual steps to combat fake news:

1. Understand the Master Narrative for Context
Master narratives help explain the shared meaning of the past, present, and future of international politics. They are a story that a group can understand and identify with their own lives. However, these narratives are also the means for political actors to shape the behavior of domestic and international audiences. As individuals, having an eye for society’s master narratives can provide context to help decipher conversations.

2. Double-Check Sources:
Journalists are taught to verify their facts through at least three sources before publishing—individuals should try taking a second look at information as well. By asking one or two questions about the source and bias of information, individuals take a pause and may just find out the viral article or social media post is untrue. Is the source an established organization or an individual? What is the organization’s mission? Chances are, if the image or article came from a website that has “conspiracy” in the address, it is not. Is the source linked to, or funded by, a specific country? If so, think about what that actor may want to achieve. It takes one minute to verify and think twice before sharing.

3. Take a Second Look at the Text, Line by Line:
The concept of critical discourse analysis (CDA) refers to the ways one can analyze text or speeches deemed to be politically or culturally influential. When reading an article, keep an eye out for some key elements of CDA, including:

Awareness is the first step in understanding how to combat disinformation and fake news, and a basic understanding of how to analyze narratives can help. As the information overload increases into 2018, and as election rhetoric unfolds, individuals will be the first barriers to the spread of fake or distorted narratives.

Roberta Braga is an assistant director in the Adrienne Arsht Latin America Center of the Atlantic Council. You can follow her on Twitter @RobertaSBraga