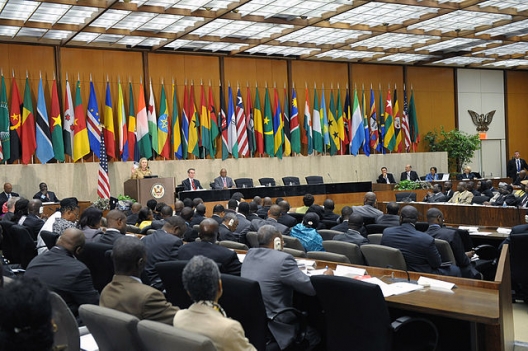 The twelfth African Growth and Opportunity Act (AGOA) forum opens on Monday in Addis Ababa, Ethiopia, bringing together senior US and African policymakers to discuss the extension of the trade legislation ahead of its September 2015 expiration date.

Originally enacted during the Clinton presidency and extended and expanded under the Bush administration, AGOA was designed to create “tangible incentives for African countries to continue their efforts to open their economies and build free markets.” It is one of the rare pieces of trade legislation to enjoy broad bipartisan support in the United States. For the past thirteen years, AGOA has provided select African countries with duty and quota-free access to American markets. The theme of this year’s meeting, “Sustainable Transformation through Trade and Technology,” highlights the various economic and technological gains the continent has made since the turn of the century.

AGOA’s notable successes are more than enough to convince many African and American policymakers that the legislation deserves an expedient renewal. Since it came into force, exports under AGOA and its parent, the Generalized System of Preferences (GSP), quadrupled from $8.2 billion in 2001 to $34.9 billion in 2012. The program has brought an estimated 350,000 direct and 1 million indirect jobs to Africa, and assisted the continent in attracting an impressive $392 billion in foreign direct investment since 2000. The policy also costs American taxpayers next to nothing—at only $2 million a year, continuation of the program is ideal for an administration facing budgetary constraints.

At the country level, AGOA’s impact is especially telling. With the help of the legislation’s tax-free provisions, the apparel sectors in Kenya, Swaziland, Mauritius, and, most notably, Lesotho—which became Africa’s largest exporter of textiles, employing some 30,000 people—can compete in US markets against Asian garment-exporting giants. Under AGOA, the automobile industry in South Africa is thriving, and smaller industries, such as Kenya’s fresh flower or Mauritius’ seafood sectors, have also expanded considerably.

Most importantly, the termination of the policy (or even a delay in its renewal) could mean an immediate departure of investment from the continent and its future deterrence. A joint analysis conducted by the Brookings Institution and the United Nations Economic Commission for Africa (UNECA) found that should the legislation expire in 2015, meat exports from Africa would drop by 60.7 percent, textiles and apparel by 51.2 percent, and milk and dairy products by 10.2 percent. Trade and real wages in Mauritius, Nigeria, Malawi, Botswana, and South Africa would substantially decline with the removal of AGOA benefits. Without a doubt, AGOA is a lifeline for a handful of countries and the companies that operate within them.

While renewal of the legislation in some form is all but certain, some policymakers have become increasingly critical of AGOA’s limited ability to diversify and expand African economies, despite the fact that these goals were not a part of AGOA’s initial mandate. AGOA’s success stories, though impressive, are few and far between. Almost 90 percent of AGOA exports to the US consist of oil, dominating the US-Africa trade relationship. And of the 7,000 product lines that qualify for duty-free access to the US, only 4 percent are currently being utilized.

There are differing opinions as to what a post-2015 AGOA should look like. Given the economic rise of countries like Nigeria, South Africa, and Botswana over the past decade, policymakers have discussed swapping middle-income African countries’ AGOA benefits for two-way trade agreements in order to give further export advantage to African least developed countries (LDCs). However, the aforementioned Brookings-UNECA report finds that LDC exports are unlikely to increase in this scenario. Economic powerhouses like South Africa and Nigeria also play an integral investment role in other African countries’ economies, and a drop in export revenue may also lead to less economic integration with that of its sub-Saharan neighbors.

African governments have also called for further US government support towards building a friendlier business environment in Africa to better enable eligible countries to take advantage of AGOA benefits. President Obama’s recently announced “Power Africa” and “Trade Africa” initiatives can potentially energize African businesses and build cross-border supply chains. Intraregional trade would also expand if AGOA allowed for greater flexibility in terms of its rules of origin (which currently discourages cross-border trade by disallowing ineligible AGOA countries from providing eligible countries with essential inputs). These programs have the potential of enabling economic activity in Africa, but the way they will (or won’t) be integrated into the AGOA framework is key to the success of all three endeavors.

Regrettably, AGOA has largely failed to attract significant US investment. While America’s global competitors are eager to take advantage of access to duty-free American markets through Africa, but the continent is still the least attractive destination for US foreign direct investment (FDI). In their report of recommendations, African ambassadors have asked for at least a 15-year extension of AGOA, as the relative short-term life span of the program makes it difficult for American companies to calculate long-term returns on their investment. (Not to mention that a delay in AGOA’s renewal will effectively deter any new investors from setting foot in Africa. As J. Peter Pham notes in his analysis of Obama’s second term policy, “an early extension would allow businesses a great deal more certainty with which to develop their plans.”) Double tax treaties (DTTs)—which prevent US companies from being taxed twice on their profits—and bilateral investment treaties (BITs)—which set up a framework to reduce firms’ overall investment risk—with African countries are for the most part missing. As of February this year, the US has only six BITs and one DTT with African countries, whereas the UK has 15 BITs and 17 DTTs, France has 11 BITs and 26 DTTs, and China has 11 BITs.

AGOA has made solid, though limited, impacts on Africa. The energetic cross-sector push from government and business bodies in Washington will, with any luck, lead to an early renewal of the program. But AGOA needs bolstering. If the US is truly seeking a new partnership with African countries “that’s based not just on aid and assistance, but on trade and partnership,” as Obama stated in Tanzania, his administration would be well advised to reauthorize an AGOA that will lead to further diversification, local business development, and increased US investment on the continent. As I noted in my recent article on soft power, the US has a major advantage when it comes to ground-level diplomacy in Africa. This, coupled with a rising US economic presence on the ground, will reinvigorate US policy towards Africa and send a strong message to world that Africa is a strategic partner of the United States.

Adrienne Chuck is an assistant director with the Africa Center.