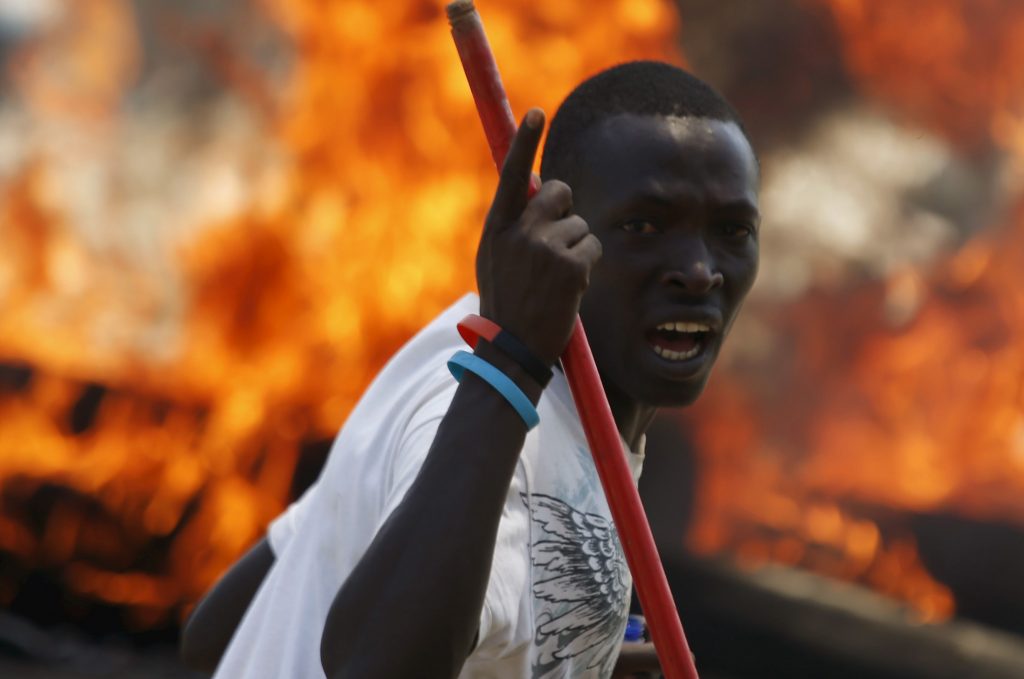 While details of a reported coup against Burundi’s President, Pierre Nkurunziza, by his former intelligence chief are fuzzy, it is clear that the Central African nation with a long history of civil war and political unrest risks descending into chaos once again.

This latest crisis was triggered by Nkurunziza’s controversial bid to seek a third term in office. Burundi’s Supreme Court ruled in his favor, saying that while the Constitution specifies a two-term limit, Nkurunziza was appointed by the transitional Parliament to his first term and so has technically only been elected once by the people. The United States and the European Union have insisted that elections—scheduled for June—be delayed.

After delivering their verdict, several Supreme Court judges fled Burundi, claiming they had been pressured to rule in the President’s favor. The court ruling fueled protests in which nearly two dozen people have been killed in this nation of 10.3 million.

Amid the growing protests, Gen.Godefroid Niyombare, who was dismissed as the head of intelligence services in February, reportedly carried out a coup May 13.

J. Peter Pham, Director of the Atlantic Council’s Africa Center, said Burundi risks slipping into another civil war. On the other hand, he warned, if Nkurunziza is “removed and constitutional succession is not followed, then you open a can of worms by upending the constitutional order.”

“Certainly stability and peace and security are important, but another important thing is the rule of law and respect for political processes,” he added.

The opposition says Nkurunziza’s plan to run for a third term violates the constitution as well as a peace deal—the Arusha Accord—that ended the 1993-2005 civil war between Burundi’s Hutu majority and the Tutsi minority. Hutus and Tutsis are on both sides of the divide between Nkurunziza’s supporters and opponents.

If the fighting in Burundi turns into a civil war, said Pham, the conflict would be more bloody than the last one, in which 300,000 people died. That is because over the past decade, Burundi’s military has played a prominent role in both African Union and United Nations peacekeeping missions, giving it better training and equipment.

“That means that if the military is split and this degenerates into civil conflict, there is every likelihood that it will be worse than previous conflicts,” said Pham.

The unrest has already triggered a humanitarian crisis in a fragile part of Africa. About 50,000 people have fled Burundi since the outbreak of violence in late April, said the UN.

At the time of the reported coup, Nkurunziza was in Tanzania attending a meeting on the Burundi crisis. African leaders will likely press him for a political solution that doesn’t destabilize the region, said Pham.

Pham spoke with the New Atlanticist’s Ashish Kumar Sen. Here are excerpts from our interview:

Q: What do we know about the rumored coup in Burundi?

Pham: We know that it has not fully succeeded, but it does not appear to be fully quashed either. Gen.Godefroid Niyombare, who was dismissed as the head of intelligence services in February, is behind the attempted coup. He made an announcement from a private radio station, as opposed to RTNB—the national radio and television broadcaster—which is still protected and controlled by forces loyal to the President.

The President is out of the country to attend a regional summit to discuss the crisis in Burundi. Troops that are currently loyal to him control the main broadcaster, and although some people are celebrating on the streets, it is not clear whether the coup will actually hold.

Q: What kind of following does Niyombare have?

Pham: It’s fluid. The context of all of this is, of course, the political crisis in the country.

Burundi has had a very troubled history of civil wars, coups, and counter coups. The most recent civil war lasted from 1993 to 2005. At least 300,000 people were killed. This was in a population of under 10 million at that time. That war ended with a fitfully drafted peace agreement—the Arusha Accord.

Q: Is President Nkurunziza’s bid for a third term in office illegal? The Supreme Court did rule in his favor.

Pham: The general understanding that most people took away from the Arusha Accord was that no one should serve more than two five-year terms as President. But the way the language of the constitution is written, a lawyer can make the argument that it’s two terms elected by the population.

The current President is coming to the end of his second term, but in his first term he was elected by the then transitional Parliament. So, was he elected by the people to two terms? This is where lawyers can quibble.

The President’s own party acknowledged last year that there was enough doubt. They sought a change in the constitution; that failed. In a way by seeking to make the change, they acknowledged that it wasn’t quite as clear as they are claiming now.

The Supreme Court has ruled in the President’s favor, but the Vice-President of the court and a number of the judges, after delivering the ruling, fled the country and then said they were forced to rule the way they did. So one wonders about how valid that ruling is.

The large numbers of people in the streets that have been protesting clearly shows that there is a strong sense in the country that irrespective of what the text may actually say, the street resists this. That doesn’t mean that just because you can assemble a crowd it’s right, but you certainly cannot ignore it because there is a security question.

Q: The President has cracked down on the opposition over the course of his time in office. Does Burundi today have a viable political opposition?

Pham: It is certainly divided and weakened and there is no one leader that stands out.

This leads to the question about this coup attempt. With the opposition not having one figured around whom to coalesce, one has to ask: Is this General, who clearly was fired, acting because there are few ways to remove someone who will not go? Is he acting as a patriot or is he acting out of frustrated ambition? In Africa, you have examples of both.

Q: How will other African leaders want President Nkurunziza to resolve the impasse?

Pham: They want a political solution and one that doesn’t destabilize the region. The reason is that the civil war is still a fresh memory. Burundi has undergone a great deal of turmoil. It is also in a very fragile area bordering the Democratic Republic of the Congo, which has enough problems of its own, including its own President who is trying to cling to power.

After the civil war, Burundi got involved in peacekeeping operations both in the African Union and the United Nations. As a result of this, the Burundian military today is better trained, better equipped, and has more experience in real battles than it has ever been in its history. That means that if the military is split and this degenerates into civil conflict, there is every likelihood that it will be worse than previous conflicts.

Q: Is there a risk that if the President clings to power we may see another civil war in Burundi—not necessarily along ethnic lines but along political lines?

Pham: It could be. On the other hand, if he is removed and constitutional succession is not followed, then you open a can of worms by upending the constitutional order. Certainly stability and peace and security are important, but another important thing is the rule of law and respect for political processes.

Q: The UN says 50,000 Burundians have so far fled the ongoing unrest in Burundi. What effect would a civil war have on Burundi’s neighborhood?

Pham: So far the neighbors have been relatively welcoming, but some countries are able to close their borders if they need to.

Q: Do you see a solution to this crisis?

Pham: It is going to have to be a very carefully calibrated solution. For example, the UN Security Council will have to agree. Russia blocked not even a resolution but a presidential statement two weeks ago because it considered it an internal affair.

The African Union and the East Africa Community also need to decide how they want to handle this. It’s not just what is happening inside Burundi, it also affects the neighboring countries.

More broadly, it is about setting a precedent. There are elections due in Africa in over a dozen and a half countries over the next two years. Several other Presidents are seeking additional terms, which may or may not be constitutional. The big elephant in the room is clearly the Democratic Republic of the Congo, where the constitution is absolutely clear that there is no consecutive third term. It not only says there is a two-term limit, it says absolutely that the article about the term limits may not be amended.

Image: A protester stands in front of a burned barricade during a protest against Burundian President Pierre Nkurunziza's decision to run for a third term in Bujumbura, Burundi, May 13. A Burundian General said May 13 he had deposed Nkurunziza for seeking an unconstitutional third term in office, and was working with civil society groups to form a transitional government. (Reuters/Goran Tomasevic)