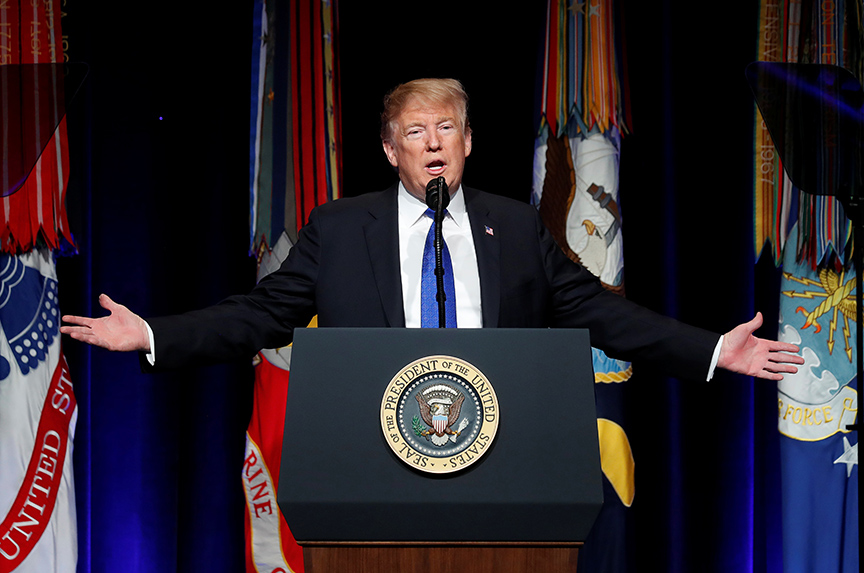 US President Donald J. Trump on January 17 unveiled a plan to defend the United States and its allies from a missile attack—the first update to the United States’ missile defense strategy in almost a decade.

“Our goal is simple: to ensure that we can detect and destroy any missile launched against the United States—anywhere, anytime, anyplace,” Trump said at the Pentagon.

The Missile Defense Review lays out the new technologies that the Pentagon wants to combat what it sees as a growing missile threat. It identifies North Korea, Russia, China, and Iran as adversaries that are “increasing the number, accuracy, and sophistication of their missiles.”

The review notes: “The   missile  base  in  Ft.  Greely,  Alaska,  has  the   potential for up to an additional 40 interceptors.” The Department of Defense, the report says, is building a new Ground-Based Interceptor (GBI) field in Fort Greely and will increase the number of deployed GBIs by twenty—from forty-four to sixty-four beginning as early as 2023.

“It is not enough to merely keep pace with our adversaries; we must outpace them at every single turn,” Trump said. “The US will now adjust its posture to also defend against any missile strikes, including cruise and hypersonic missiles.”

Further, he added, “we will recognize that space is a new warfighting domain, with the Space Force leading the way.”

Critics of the plan say it will set off a new arms race.

The Pentagon’s last Missile Defense Review was conducted by the Obama administration in 2010.

Retired Lt. Gen. Patrick O’Reilly, a nonresident senior fellow at the Atlantic Council’s Scowcroft Center for Strategy and Security, shared his thoughts on the MDR. Here’s what he had to say:

“The 2019 [Missile Defense Review] comprehensively described the significant, historical, and growing uncertainties associated with missile threats  and our ability to effectively counter those missile threats.

“What is inferred, but not explicitly stated, is the large technical and operational challenges facing decision makers who must select prolonged investment courses of action based on ambiguous and speculative intelligence and industry assertions about the threat, missile defense technologies, and the cost and time to reliably develop and deploy those capabilities.

“For example, as the MDR states, the current homeland defense system, developed and deployed over the past twenty years is geographically optimized to counter the Korean and Iranian long-range missile threat, but how would increasing interceptors at Fort Greeley, or even a new interceptor site in mid-US, counter missile threats to the homeland United States from cargo ships, submarine, and mobile systems from southern, western or eastern trajectories?  Just based on geometry—it can’t.

“Likewise, the mention of the growing inventories of proliferated missiles implies a growing threat of simultaneous missile launches (as stated, possibly from multiple directions), which could potentially saturate interceptor-based missile defense systems.

“The MDR prudently mentions the need for technology (including several alternative technical approaches) for flexible and adaptable missile defense systems, but gives no indication of the willingness to make the investments required to dramatically depart from last century’s missile defense concepts that the MDR implies will be wholly inadequate to affordably and effectively counter the likely missile threats our nation, deployed forces, and allies that will face over the next twenty years.

Image: “Our goal is simple: to ensure that we can detect and destroy any missile launched against the United States—anywhere, anytime, anyplace,” US President Donald J. Trump said while announcing the Missile Defense Review at the Pentagon in Arlington, Virginia, on January 17. (Reuters/Kevin Lamarque)