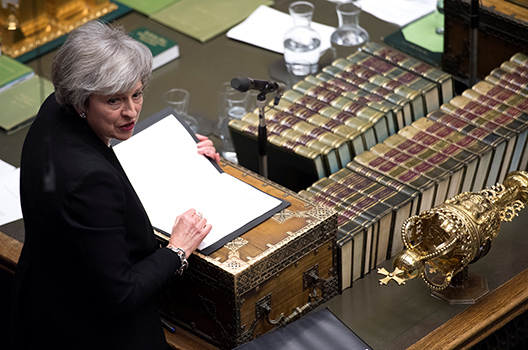 The UK Parliament on January 29 endorsed a provision that would empower British Prime Minister Theresa May to renegotiate her Withdrawal Agreement with the European Union in order to come up with “alternative arrangements” that could break the gridlock over the way the UK leaves the EU.

The vote on the “Brady Amendment” was seen as a victory for May who dramatically shifted her support from her own withdrawal deal toward renegotiation in order to achieve some consensus within her Conservative Party for a passable deal.

“This is a very big shift. It’s not a done deal, and this isn’t the end, but a tiny patch of light is now visible,” said Andrew Marshall, the Atlantic Council’s vice president of communications. “Much remains to be agreed to and a shift in London will also require much rethinking in Brussels, but for the first time in some months, there is the sense of direction, and maybe even an emerging, if painful, consensus.”

The amendment passed 317 to 301, with significant support from the Conservative and Democratic Unionist (DUP) parties. Put forward by Conservative member of Parliament (MP) Graham Brady, the provision notes Parliament’s desire to replace the current “backstop” procedure in the Withdrawal Agreement—which would preserve an open border between Northern Ireland and the Republic of Ireland in the case that the UK and the EU fail to agree to a permanent economic relationship—with “alternative arrangements to avoid a hard border,” potentially including new technologies that would make border checks unnecessary.

“The passing of the Brady amendment appears to briefly lift May out of her stalemate domestically,” Bart Oosterveld, C. Boyden Gray fellow on global finance and growth and director of the Atlantic Council’s Global Business and Economics Program, explained.

After the amendment passed, May said Parliament had demonstrated that “there is a route that can secure a substantial and sustainable majority in this House for leaving the EU with a deal. . . This House has made it clear what it needs to pass an agreement.”

“The response by the EU has been lukewarm and no significant new negotiating space about the Irish backstop has been created by the bloc in response,” Oosterveld said. “After Prime Minister May makes the rounds of European capitals, it is likely Parliament will have to consider asking for an extension” of the Brexit deadline, Oosterveld said.

The stakes are high for May as if she “is to keep the Brexiteer wing of her party on board as well as the DUP allies on which her slender parliamentary majority rests, then she. . . needs a legally binding agreement that can ensure the backstop is not endless,” explained John M. Roberts, a UK-based nonresident senior fellow at the Atlantic Council.

According to Frances Burwell, a distinguished fellow with the Atlantic Council’s Future Europe Initiative, the vote showed that “there is no consensus around what Brexit should be. [British politicians] don’t want the Irish arrangements written into the current UK-EU accord, but it is not clear what they do want. Above all, MPs do not seem to understand that whatever they agree must also be agreed by the EU.”

Unfortunately for May, Roberts argued, “the EU will only be prepared to offer a polite rephrasing of words and will refuse to allow anything that risks the legal status of the backstop.” May could only be successful in changing Brussels’ position, Roberts continued, if “the Republic of Ireland, an EU member state which depends very significantly in its trade with the UK, [could] come up with some ingenious plan to keep the border open under all circumstances.”

The Brady Amendment was just one of several voted on by the House of Commons on January 29. Parliament rejected an amendment by Labour MP Yvette Cooper, which would have urged Parliament to pass legislation requiring the government to ask the EU for an extension of the Article 50 withdrawal process if a deal is not passed by February 26. Another motion by Conservative MP Dominic Grieve would have forced May to allow Parliament to debate other Brexit options for six full days before March 26, but it failed 321 to 301.

But Parliament also passed an amendment—318 to 310—from Conservative MP and former environment minister Caroline Spelman which stated that there will not be a no-deal Brexit. This resolution has no binding effect on the government but was meant to demonstrate Parliament’s desire to avoid crashing out of the EU.

While the measure is largely symbolic, Oosterveld warned that it “makes a scenario in which the UK unilaterally withdraws the Article 50 on or shortly before the March 29 deadline more likely.”

Image: Britain's Prime Minister Theresa May speaks during a debate on her Brexit 'plan B' in Parliament, in London, Britain, January 29, 2019. (UK Parliament/Jessica Taylor/Handout via REUTERS)