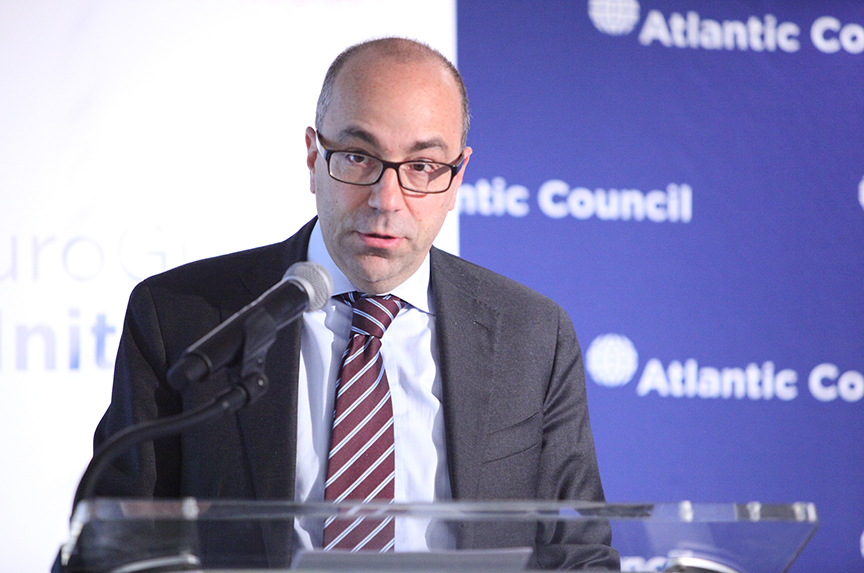 A new Atlantic Council report provides a roadmap for the European Union to stimulate economic growth, and, by doing so, safeguard the European project and reinvigorate the transatlantic alliance.

The report, Charting the Future Now: European Economic Growth and its Importance to American Prosperity, was launched by the Atlantic Council’s EuroGrowth Initiative in Washington on March 10.

The European Union is the largest recipient of US goods and services, while EU member states are the largest foreign investors in the United States, where they sustain more than seven million US jobs. Citing these facts, Eizenstat, a former US ambassador to the EU, contended that Europe is “absolutely vital” to the United States.

The EU is facing numerous challenges ranging from a migrant crisis of historic proportions to the United Kingdom’s looming departure from the Union, and the rise of anti-EU populist parties as Germany, France, the Netherlands, and perhaps Italy, prepare to hold elections this year.

Andrea Montanino, director of the Atlantic Council’s Global Business and Economics program and the report’s rapporteur, said higher levels of European growth are necessary to change the negative narrative surrounding economic integration and the common currency in Europe that has fueled the rise of euroskeptic political parties.

Describing Europe as being at the center of a “tempest of geopolitical tensions,” Montanino noted that the continent is the theater for major crises, including the conflict in eastern Ukraine and the migrant crisis fueled by the war in Syria.

Higher levels of growth are necessary to provide European leaders with the political capital and financial resources needed to manage these challenges, he said.

Greater European growth is also important for the United States because it will create greater demand in Europe and, as a result, higher levels of US exports. At present, more than 40 percent of US foreign direct investment (FDI) is in the EU-27, the twenty-seven member states of the EU, excluding the United Kingdom. European companies, in turn, are heavily invested in the United States.

“European growth is important for geopolitical and geoeconomic reasons,” said Montanino, noting that the EU is a major player in development aid and if that commitment were to weaken it would fall to the United States to ramp up its contributions.

Montanino elaborated on the short-term, medium-term, and long-term recommendations in the report. In the short-term, he said, Brexit must be negotiated keeping in mind a twenty-year, rather than a two-year, timeframe; the Schengen Agreement, a treaty enabling passport-free travel in much of the EU which has been jeopardized by a fear of migrants, must be fully restored; and the Transatlantic Trade and Investment Partnership (TTIP), a free-trade agreement, must not be allowed to fall by the wayside.

In the medium-term, the European Commission has a number of products—such as the European Energy Union, service regulation, the Digital Single Market, and the Capital Markets Union—the completion of which will create the right conditions for member states to carry out reforms.

In the long-term, the report suggests a plan that would create concentric circles, with an inner circle of countries—made up, ideally, of all Eurozone countries—that drives fiscal integration. This inner core should create, or at the very least explore the option of creating a European fiscal authority that would, among other things, issue Eurobonds with the aim of financing infrastructure, human capital, and research and development, said Montanino.

“There is no popular support for more Europe in most of the European countries,” he said. “More Europe is not the selling point vis-à-vis most people… Brussels is seen as a big bureaucracy,” he added.

Frustration toward Brussels has, in fact, fueled the rise of euroskepticism and of far-right populist leaders, and led—most pointedly—to British voters deciding in a June 2016 referendum in favor of leaving the EU.

Warning against the danger of ignoring such sentiment on the continent, Blanchard said: “The problem is that we leave these criticisms to the anti-Europeans… If those of us who believe in Europe accept that these are changes that need to be made… we will take away some of the arguments that the populists are using.”

Blanchard disagreed with the report’s recommendation to reverse the suspension of the Schengen. “I am much less eager to have it back… For the moment, it is a completely different environment, we cannot protect our borders,” he said.

Poul Thomsen, director of the European Department at the International Monetary Fund, echoed some of Blanchard’s criticism noting that there is “an insensitivity to the political realities of Europe in the report.”

“Without a more realistic view on the politics, one might actually end up achieving the opposite of what you want to achieve,” Thomsen said.

“While I welcome the proposals to build on the architecture… it should not mask the problem or be an excuse for not dealing with the problem at the national level,” he added, noting that these problems are primarily structural.

Xavier Rolet, chief executive officer of the London Stock Exchange, endorsed the report’s focus. The real issues that hamper the EU’s competitiveness, he said, are the high labor costs, high costs of energy, and the cost of capital.

Image: “European growth is important for geopolitical and geoeconomic reasons,” Andrea Montanino, director of the Atlantic Council’s Global Business and Economics program and the rapporteur of a new report, Charting the Future Now: European Economic Growth and its Importance to American Prosperity, said at the Atlantic Council in Washington on March 10. (Atlantic Council/Victoria Langton)