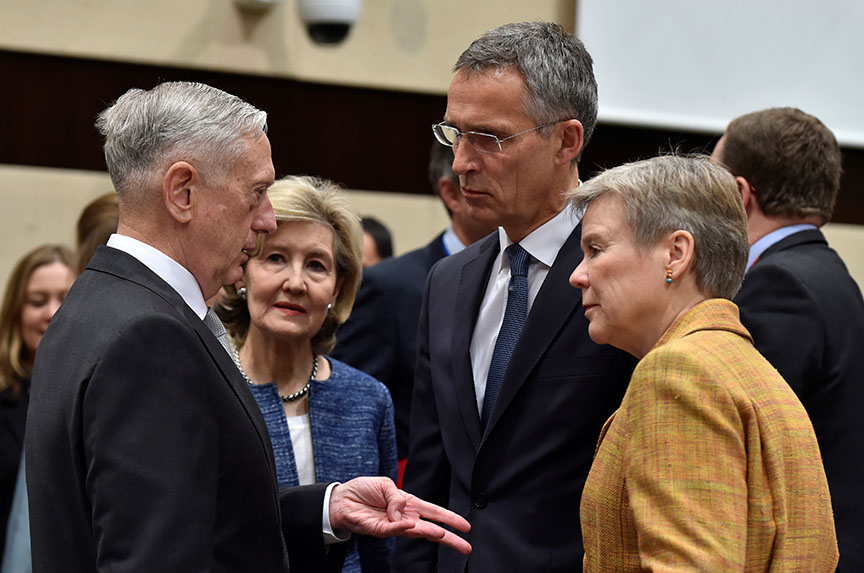 When the Doomsday Clock took its last big leap, moving from five minutes to three minutes to midnight in 2015, Rose Gottemoeller took it personally. She was then US under secretary of state for arms control and had spent her entire career negotiating with first the Soviets and then the Russians to keep the world further from the Bulletin of Atomic Scientists’ “apocalypse.”

“I was very cross,” she recalled with a self-deprecating laugh, “because of course I was responsible for arms control matters in the government and they still moved the clock back toward midnight. I was like ‘what do I have to do?!’” Gottemoeller said nonproliferation experts felt the Obama administration could have done more.

When the “clock of doom” ticked forward thirty seconds in January, up to 11:58, Gottemoeller watched from Brussels in her post as NATO’s deputy secretary general, no longer responsible but no less concerned.

“I take it very, very seriously,” she said in an interview in late January. Not since 1953 after the United States and the Soviet Union both tested hydrogen bombs has the assessment been so dire.

The year 2018 seems to be losing time already. Tensions are rising fast between the United States and Russia, with Moscow positioning nuclear-capable missiles in Kaliningrad and continuing to violate the 1987 Intermediate-Range Nuclear Forces (INF) Treaty.  Meanwhile, the Trump administration’s Nuclear Posture Review (NPR) raises questions about whether Washington’s first choice of response to not just this dispute, but possible non-nuclear attacks, will be negotiation.

Gottemoeller served as an adviser to the Trump administration on the NPR. Declining to comment on it specifically since the document had not yet been made public at the time of our interview, she urged a “close reading” of it, suggesting the new posture would still adhere to the longstanding principle that “nuclear weapons are not to be used. They are to provide for deterrence.”

NATO signs on to pro-INF pressure on Moscow

But the US certainty that Russia has been undermining the INF for many years is now shared by NATO allies, who were briefed with what’s described as “very convincing evidence” by US Defense Secretary Jim Mattis last November. Gottemoeller knows this brief inside out. When then US President Barack Obama decided to confront Moscow about the accumulating evidence, which she said showed “absolutely” that Russia was in breach, Gottemoeller was dispatched to have that conversation. She reported back that her Kremlin counterparts denied they possessed the ground-launched cruise missile in question, using the meeting to instead interrogate her about how much Washington knew about their program.

The Kremlin has spent four more years unapologetically investing in that missile, known as the SSC-8 in the United States and the 9M729 in Russia, which insists it does not violate the INF range limit of 310-3,420 miles.

The Trump administration has warned that it will not tolerate the ongoing violation.

Gottemoeller applauds the move. “I was very glad to see that the Trump administration picked that up and has even upped the ante,” she observed. “They’ve talked about some of the response measures they are working on and would be willing to take if Russia does not return to compliance with the treaty… There will be consequences if they don’t return to compliance with the treaty.” Trump has already authorized the research and development of an American version of a ground-launched, intermediate-range missile system to move forward if the Russians don’t relent.

As a lifelong advocate for arms control, however, Gottemoeller hopes the US response remains in the realm of diplomacy and not a race to catch up to the Kremlin. “That’s why it’s important,” she emphasized, “for all of our allies and other countries around the world to underscore for the Russian Federation the importance of the INF Treaty.”

On the thirtieth anniversary of the pact in December, NATO did issue a statement calling Moscow out on the breach and urging dialogue with Washington for a resolution of the standoff many see as the potential kickoff to a new arms race.

As for her views on that possibility, Gottemoeller again dips back into her previous life. She was the chief US negotiator on the New Strategic Arms Reduction Treaty (New START), concluded in 2010 and fully implemented in February, limiting Russia and the United States to 1,550 deployed strategic nuclear warheads and 700 delivery vehicles. Gottemoeller remains a believer. “It’s important that New START is in force,” she said. “There can be no buildup above those numbers. There can be no arms race as long as the treaty remains in force.”