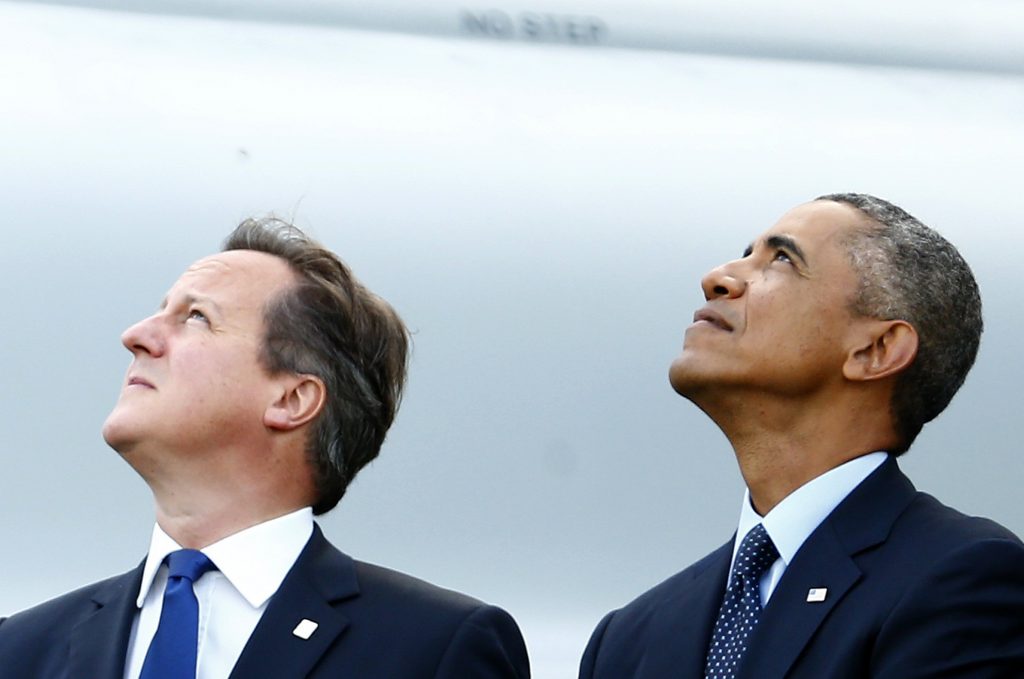 British Prime Minister David Cameron and US President Barack Obama watch a fly-past during the NATO summit in Wales September 5, 2014. Cameron is reportedly eager to push for an early referendum on whether the United Kingdom should remain part of the European Union. (Reuters/Andrew Winning)

British Prime Minister David Cameron arrived in Riga, Latvia, May 22 determined to push for reform of the European Union and to renegotiate the United Kingdom’s membership.

Emboldened by his recent election victory, Cameron said he wants to give the British people a “proper choice” in a referendum on whether the United Kingdom should remain in the EU. The Prime Minister intends to hold that referendum before the end of 2017.

At the top of the agenda at the Eastern Partnership summit in Riga, however, is a discussion on the EU’s relationship with six eastern states—Armenia, Azerbaijan, Belarus, Georgia, Moldova, and Ukraine. Cameron is nevertheless determined to use his first post-election summit to make the case for EU reform.

The United Kingdom’s exit from the European Union would have negative consequences for its “special relationship” with the United States, says the Atlantic Council’s Frances G. Burwell.

“Increasingly, we have looked to the British, within the special relationship, to be a strong partner in a strong EU,” Burwell, Vice President and Director of Transatlantic Relations at the Atlantic Council, said in an interview. “If they are not in the EU, the British then become less important for the United States. That would be to the advantage of no one.”

Cameron is mainly trying to limit migration to the United Kingdom.

While careful not to tip his hand, Cameron provided a glimpse into some of the United Kingdom’s demands ahead of the May 8 election that returned him to power.

“People are worried that Britain is being sucked into a United States of Europe; that may be what some others want, but it is not for us,” he wrote.

Burwell discussed the prospects and implications of the United Kingdom’s exit from the EU with the New Atlanticist’s Ashish Kumar Sen. Here are excerpts of that interview:

Q: Why is it important for Britain to remain in the EU?

Burwell: Without being part of the EU, Britain is really just a medium-sized power with much reduced influence. This is not good for the UK because the UK has, traditionally, quite an important role in global politics. But its resources are not proportionally what they were. Like many countries in Europe and the United States, the UK is less and less able to dominate the world stage, and so it must combine with others. For the UK to play anything like the type of role that it has in the past, it really needs to be part of something larger. And in Europe, that’s the European Union.

It is important for the European Union because Britain brings a less statist approach to economic issues in particular. It is a liberalizing factor in terms of EU regulation. That is good for the EU. The UK has also traditionally played a balancing role in the EU.

Q: Prime Minister Cameron wants to renegotiate Britain’s terms of membership in the EU. Which are some of his demands and on which can he get his way?

Burwell: It is not clear exactly what the British want. One of the major issues in the EU is immigration. Can you ban immigration from other EU countries? That would be extremely difficult for the other member states to agree to. Currently, member-state nationals have the right to live and work in other countries of the EU. It would be very difficult to put restraints on that.

What would be more likely, and what Cameron may be able to achieve in these negotiations, is some sort of restraint on the access of those non-UK, but EU, nationals to benefits should they be in the UK and out of a job.

A number of the European governments have an interest in restricting what might be called “benefit shopping” where unemployed people go looking for better benefits in the EU’s richer countries. That is probably going to be something that everyone can agree on, but the Poles have made clear that they do not think that their nationals should be discriminated against in the UK.

Q: Has Cameron’s re-election put him in a better position to stand up to euroskeptics within his Conservative Party?

Burwell: We were all quite surprised by the fact that Cameron got an outright majority, even though a narrow one. All of the polls had been predicting a hung Parliament with fewer Conservative seats.

Many of those who voted for him may well be on the euroskeptic fringe and want to make sure that there is a referendum [on Britain’s EU membership].

It is not clear to me that the Prime Minister is now in a good position to argue that Britain should stay in the EU. Nothing in his campaign made that argument. We’re going to have to see what he manages to negotiate and whether that is going to be sufficient. But I think that the euroskeptics, both in [the anti-immigration] UK Independence Party (UKIP) and within the Conservative Party, have not heard anything yet that convinces them.

[London Mayor] Boris Johnson is also now a Member of Parliament, and as a leading and very visible euroskeptic, he is in good position to challenge the Prime Minister, not necessarily for the prime ministership, but to enliven the debate in Westminster.

Q: So what are the prospects of Britain actually leaving the EU?

Burwell: It should not be considered impossible. One of the things that 1989 taught us was that what you think can never happen can happen. If you look at the public percentage of the votes, not the seats, UKIP got one seat, but it got over 12 percent of the public.

In a referendum, which will be done based on the public percentage, there might be a stronger showing for UKIP than one might have imagined, given how poorly they did in this election.

Another factor is that the Scots, although a small proportion of the overall electorate, have certainly shown their political determination in this election by winning all but one of the Scottish seats. If you are SNP [Scottish National Party] and you want to have another Scottish referendum, the best way to get that is to vote for Britain to leave the EU, because that is what held Scotland in last time.

It is a complex political landscape, and the issue is going to be whether those forces who genuinely benefit from EU membership—the larger business interests and even smaller business interests that have economic ties to the continent—will they come out publicly and argue to stay in the EU.

Britain has always had a very complicated relationship with the EU and has never been wildly enthusiastic about joining it. It’s not like Belgium, where eurofederalism is, if you will, a religion.

Q: What happens if Britain leaves the EU?

Burwell: We would see a new Scottish referendum very quickly. We may well see the Scots decide to leave the UK and to stay within the EU. That was a big factor keeping the Scots in the UK the last time around.

We would also see a much diminished US-UK partnership, because we would have less business to discuss with them. We spend an increasing amount of our time talking business with the EU, including competition suits against major US companies, the Transatlantic Trade and Investment Partnership (TTIP), the new digital single marketplace, and sanctions on Russia because of Ukraine. These are all things we are doing through Brussels and the EU member states. If the UK were to leave the EU, it would just be an add-on to those discussions. That would be an unfortunate shift in the US-UK relationship.

Q: How committed is Cameron to keeping the UK in the EU and which EU leaders can he count on for getting some of what he actually wants?

Burwell: Prime Minister Cameron is committed to keeping Britain within the EU, but he has unleashed a debate in a party where that is not necessarily the majority belief.

There are many leaders in the EU, including foremost German Chancellor Angela Merkel, who very much want the UK to stay, and will bend over backwards to try and make an arrangement with the British.

We will see some movement and some accommodation. There will be lots of rhetoric about helping the British. But in the end, I have heard nothing in talking to people in Berlin, Paris, and Brussels that makes me think they will be willing to change the EU treaties to accommodate the British.

There is a certain level of demands that the British can have, but if it requires treaty change, they will be disappointed, as no one in Europe wants to go through that.

There is also a desire on the part of the Europeans to see a real commitment from the British. They’re in a situation where they feel that no matter what they give the British, the British will not be satisfied and there will still be a fundamental part of the British population that wants to leave. So that makes them less likely to want to negotiate [with the British].

So there is this lack of confidence that any deal can work, as also the question of whether there is an intersection between what Prime Minister Cameron needs to take home to satisfy his party and what the other EU members are willing to give.

Q: Could treaty change happen after a referendum votes to keep Britain inside the EU?

Burwell: I certainly see treaty change as a future possibility for the EU apart from the British question, but no one wants to undertake their own ratification process and then have the ultimate result contingent on whether the British are going to stay or go.

There is an attitude on the continent that the British have to come to peace with the decision to join the Union and become engaged in the Union, and if they are ready to go it’s too bad. That attitude is not going to work in Prime Minister Cameron’s favor as he starts to negotiate.

Q: What effect would Britain’s exit from the EU have on its “special relationship” with the United States?

Burwell: It would be a tremendous blow for the special relationship. We will all still watch Downton Abbey and follow the birth of the next royal child, but Britain leaving the EU will very much affect which capital we go to first in Europe to bring together all our allies on questions such as sanctions on Russia.

More important for the British military is whether the government continues its cost-cutting measures and what decision it makes on renewing Trident [Britain’s nuclear weapons system]. We are, more and more, doing things with European law enforcement in terms of foreign fighters and counterterrorism, and there will have to be special arrangements for the British to remain part of that effort. Those arrangements can be made, but it will just be a more cumbersome system.

Increasingly, we have looked to the British, within the special relationship, to be a strong partner in a strong EU. If they are not in the EU, the British then become less important for the United States. That would be to the advantage of no one.