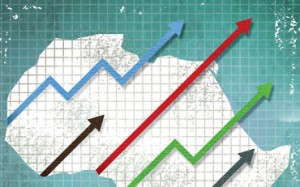 The latest World Bank study describes the state of the global economy as “volatile, punctuated by natural disasters, large swings in investor sentiment, and periods of relative calm and improving prospects.”

Fiscal deficits, currency crises, and prospective wars in Iran and Syria weigh on both high-income countries and developing economies alike. China may be entering the middle-income trap as growth slows, while the Brazilian economy seems to have succumbed with modest growth forecast for this year.

Things are different in Africa. Sixteen of the twenty-nine fastest growing economies are in Africa and GDP in Sub-Saharan Africa grew at 4.7 percent in 2011, making it one of the fastest growing regions of the world. Rising incomes, lower inflation, higher remittance flows, and lower interest rates are expected to propel growth in the next several years to over six percent according to the World Bank. The fastest growing economies include Ghana, Eritrea, Rwanda, Ethiopia, and Nigeria. Given low levels of development, small jumps in production account for large swings of growth. Yet, growth is primarily driven by domestic demand and not simply raw material exports. For example, car imports in Rwanda increased 250 percent year over year and the service sector in Ghana accounts for half of GDP. The hustle and bustle of capitalism can be felt on the streets of Addis, Kampala, and Mombasa.

To be sure, natural resource exports remain a significant component of certain African economies and these countries benefit from higher commodity prices in oil, gold, and platinum. US trade with African countries is extremely dependent on these raw materials imports from Nigeria, Angola, and South Africa. A challenge for these economies is to diversify and invest in their own economies rather than bank earnings in Europe and the Americas.

While growth rates in Africa are impressive, expansion cannot be confused with development. Disease, infant mortality, and life expectancy still seriously lag behind the developed countries. Life expectancy in Botswana is just 35. A child under the age five is almost 50 times more likely to die in Mozambique compared to a child born in Norway. Adult literacy in Ghana is just 66 percent.

In spite of structural challenges and the legacies of war, African governments should take credit for growth as they are tackling difficult issues such as public health, political instability, and inflation. Corruption has long plagued Africa and is undoubtedly present–Somalia is ranked the most corrupt country in the world according to Transparency International. However, like most things in Africa, there are vast differences that transcend the borders of 54 countries. In the global ranking of 183 countries by Transparency, Botswana ranks just eight places below the United States and is considered less corrupt than South Korea, Poland, and Brazil. Likewise, Rwanda is ranked less corrupt than Greece, Turkey, and Italy. While corruption is significant in many countries, African countries no longer dominate the bottom as it once did.

That Africa is rising is indeed good news. Yet, the achievements are fragile and threatened by sub-national and transnational groups that challenge governments’ abilities to ensure stability. To reinforce small African militaries and bring stability to conflict zones, there are nine UN and AU peacekeeping missions in Africa. International efforts are important, but highlight that African governments woefully lack the military capacity to provide for their own security (India, Pakistan, and Bangladesh dominate United Nations peacekeeping missions in Africa). As countries develop, investing in their own militaries is both necessary to reduce dependence on external powers, but also essential to provide a secure environment for development.