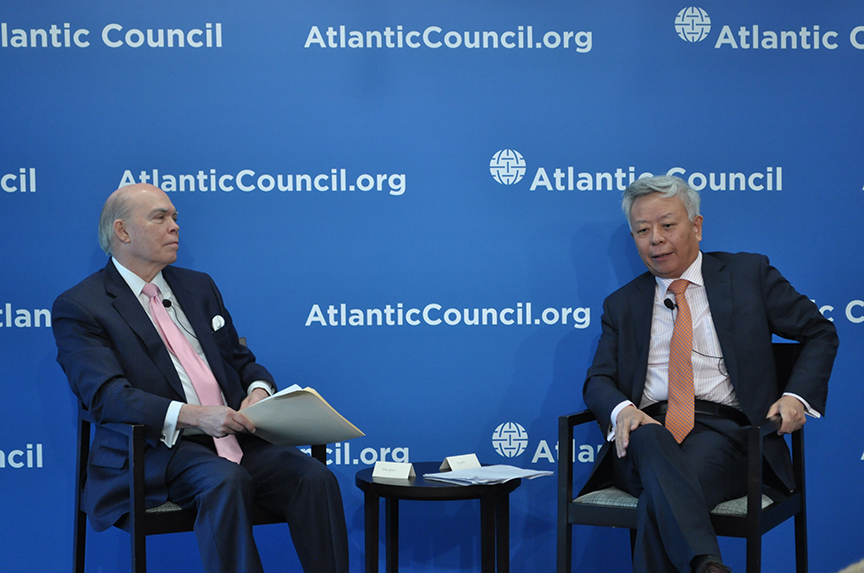 The Asian Infrastructure Investment Bank (AIIB) should be a platform for cooperation, not a point of conflict between the United States and China, the bank’s president, Jin Liqun, said at the Atlantic Council in Washington on April 24.

Former US President Barack Obama’s administration was reluctant to join the AIIB amid concern that China would use the institution to set the global economic agenda at the cost of environmental protections, human rights, anticorruption measures, and governance standards.

Jin recalled that in his conversations with Obama administration officials he often made the point that China was eager to work with the United States to create the AIIB. “When China and the US work together, wonderful things [will] happen,” he said.

With regard to the AIIB’s relationship with the United States, Jin said that as a Chinese national he believes that the bank should not be another point of conflict between the United States and China; instead, it should be a platform for cooperation.

Speaking as the AIIB’s president, he said: “I would like to tell the American audience I have already engaged the financial institutions, manufacturers, law firms, consulting firms to work together. I have American nationals working in my institution.”

Jin said that in his conversations with officials in the Trump administration he has focused on how to build cooperation between corporate America and the AIIB—how to achieve a “win-win.”

Jin spoke at an event hosted by the Atlantic Council’s Brent Scowcroft Center on International Security. Following his keynote address, he participated in a discussion moderated by Olin Wethington, a senior fellow in the Scowcroft Center.

The Obama administration “made something of a mistake by not getting onto this train right from the beginning,” Atlantic Council President and Chief Executive Officer Frederick Kempe said in his opening remarks.

The Obama administration suffered a setback when its allies, including the United Kingdom, Germany, Australia, and South Korea, rushed to join the AIIB. Today, the bank has seventy members, a number Jin expects will reach eighty-five by the end of this year.

In his remarks, Jin delivered a spirited defense of the institution he leads. Addressing critics head on, Jin made note of the criticism that the AIIB would undercut US-led multilateral financial institutions, disrupt the world economic order, and that China would dominate decisionmaking in the bank.

“At the very beginning, there were a lot of harsh comments on this initiative… We stayed very calm,” Jin said, explaining that “credibility has to be earned through not what you are talking about, but by your performance.”

Jin recalled that when he invited European countries and Japan to join the AIIB—which formally opened its doors on January 16, 2016—they had concerns that their reputations would be tarnished. “They told me straightforward, ‘We are worried about the governance of this bank,’” he said.

The AIIB was “serene” in the face of such criticism because it was convinced that it was taking the right course of action, Jin said. “We intend to work with all of the participating countries to promote broad-based economic, socio-development in Asia and in other emerging market economies across the world,” he added.

Explaining the motivating factor behind the AIIB, Jin said: “We just want a bank which can deal with the shortfalls of financing for infrastructure investment in Asia and all of the borrowing countries in the future.”

China’s experience with international finance institutions from the 1980s to the mid-1990s shaped the decision to make infrastructure investment a key consideration of the AIIB. Over this period, China borrowed heavily from the World Bank, the Asian Development Bank (ADB), and international capital markets to invest in infrastructure.

“Given this experience, China believed that to promote broad-based economic and social development through investment in infrastructure and other productive sectors is really important,” said Jin.

Jin noted that Asia is awash in liquidity—largely due to high rates of personal savings—yet many infrastructure projects are “crying out for resources… because of a lack of intermediation.”

In its first year, the AIIB made loans totaling $1.73 billion, covering a number of sectors with an emphasis on a green economy.

Jin said the AIIB today is a truly multilateral institution with core values that are “lean, clean, and green, but not mean.”

“Don’t judge us by one year’s performance,” he said, “we will continue to stay the course.”