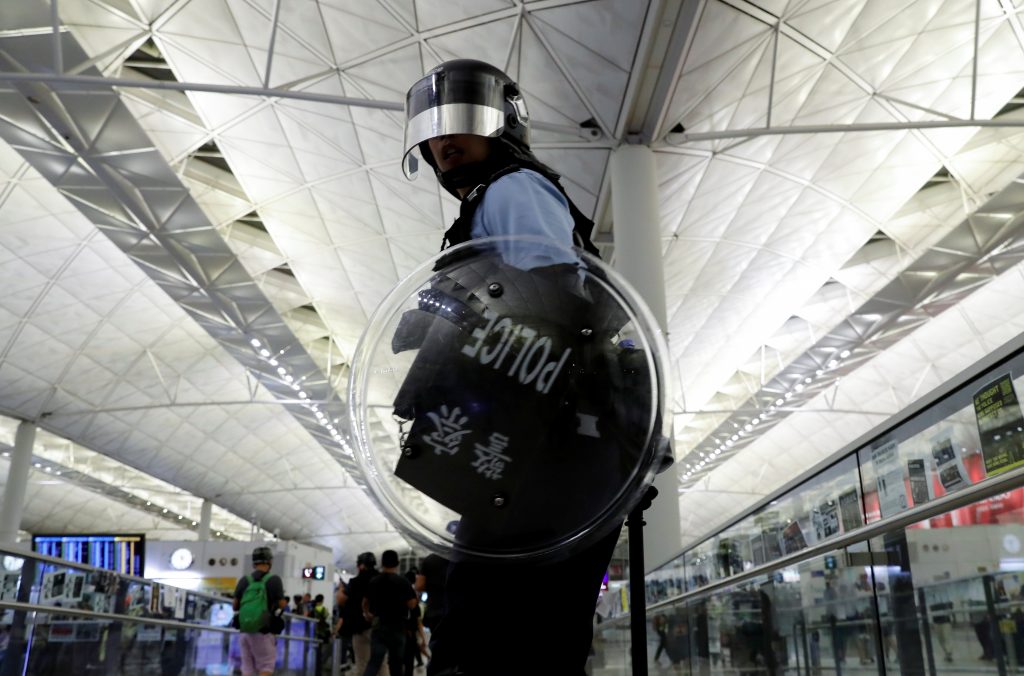 Months-long demonstrations in Hong Kong escalated on August 13, when riot police and protesters clashed in Hong Kong’s international airport. Demonstrators began occupying the airport on August 9, the latest move in a protest campaign that began in June. The violent encounters between protesters and riot police could spark a crackdown by Chinese authorities, Atlantic Council resident senior fellow Robert A. Manning said, adding that “this will not end well.”

The protests have been fueled by fears that Hong Kong’s special status within the People’s Republic of China is being eroded. The former British colony, which was transferred back to Chinese rule in 1997, allows for freedom of speech, free press, and the right to demonstrate peacefully, unlike mainland China, and maintains an independent legal system. The maintenance of these liberties, enshrined in Hong Kong’s Basic Law, while under official Chinese control is referred to as the “one country, two systems” model.

A new bill to allow extraditions to China from Hong Kong, however, provoked backlash as a further sign that Hong Kong’s limited autonomy could be under threat from Chinese authorities. Protests began in June, causing Hong Kong’s chief executive, Carrie Lam, to label the bill “dead,” but demonstrations have continued as the measure has not been officially withdrawn and protestors remain concerned about the general drift towards more control from Beijing.

According to Manning, the protestors are driven by “Beijing’s failures to implement the Basic Law and follow-on pledges to permit direct elections and more a more democratic political system by 2017.” While making a pledge to preserve Hong Kong’s democratic freedoms, Beijing has instead tried to force a “one country, 1.5 systems” model with greater political and legal control over the province.

Beijing has responded to the protests by denouncing alleged violence by protestors and accusing outside countries of interfering in domestic Chinese affairs. On July 30, a spokesperson for the Chinese Foreign Ministry arguedthat the protests “are somehow the work of the United States,” while the commander of the Chinese garrison in Hong Kong said that his troops were “determined to protect national sovereignty, security, stability, and the prosperity of Hong Kong.” Manning argued that Beijing’s depiction of the demonstrations as foreign-backed is an attempt to “legitimize organic [and] homegrown outrage.”

Lam said on August 13 that the continued protests and take over of the international airport mean that Hong Kong is reaching “the brink of no return.” Lam accused protestors of “illegal activities” including attacking “police officers with malice intention.”

Manning predicted that Chinese President Xi Jinping “will disregard US and global opprobrium and if he deems it necessary will take police or military action. One possible factor for restraint is Beijing’s fear of destabilizing Hong Kong’s role as a global financial hub.” US President Donald J. Trump tweeted on August 13 that US “intelligence has informed us that the Chinese Government is moving troops to the [b]order with Hong Kong. Everyone should be calm and safe!” US Senate Majority Leader Mitch McConnell said on August 12 that any violent crackdown of the protests by Chinese authorities would be “completely unacceptable.”

The Trump administration has been increasingly critical of Beijing, both over its unfair economic practices and its attempts to stifle internal dissension. Despite this criticism, US and Chinese negotiators continue to discuss a potential new economic agreement which could address Washington’s economic grievances and attempt to rebalance the trading relationship. A violent crackdown of protestors in one of the world’s most important financial hubs, however, “may well end up being yet another charge in the US indictment of the Chinese party state,” Manning argued.

The increasingly bellicose rhetoric from Beijing could be “a bluff on President Xi Jinping’s part to put pressure on the protestors to stand down,” Atlantic Council President and CEO Frederick Kempe told CNBC on August 13. “The last thing [Xi] wants to do,” Kempe added, “is use force [or] military force with Beijing’s fingerprints on it to bring this under control.” Xi is hemmed in, however, by the upcoming 70th anniversary of the founding of the People’s Republic in October, Kempe argued. “President Xi cannot be shown to be weak with the United States on trade, nor the protestors in Hong Kong heading up to this anniversary,” Kempe explained.

With international attention fixed on the dramatic scenes from Hong Kong, Beijing seems to be doubling down on its commitment to end the disruptive demonstrations and could be willing to risk considerable international backlash to end the crisis.

Image: Riot police is seen during a mass demonstration after a woman was shot in the eye, at the Hong Kong international airport, in Hong Kong, China, August 13, 2019. REUTERS/Tyrone Siu