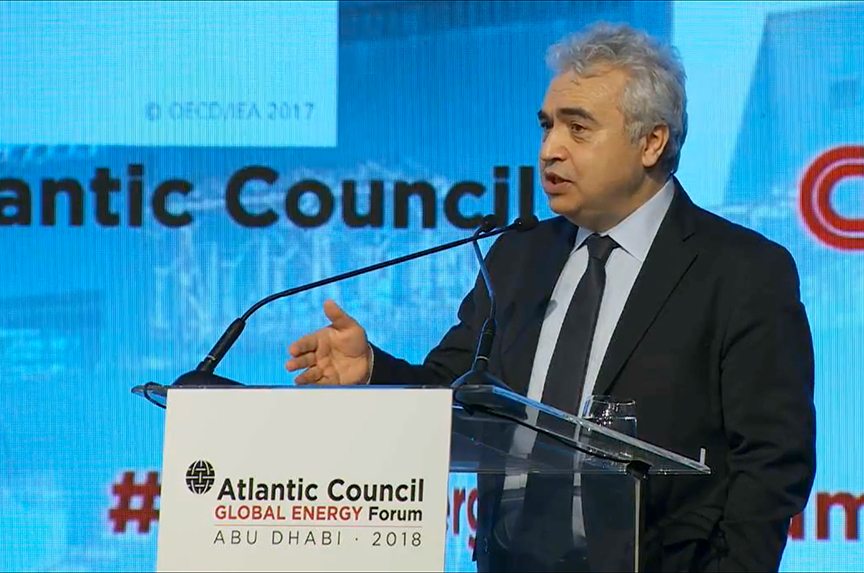 Delivering a keynote address January 13 on the second and final day of the Atlantic Council’s Global Energy Forum in Abu Dhabi, Birol said the cost of solar power will tumble by half in the next three years as major countries turn to the sun as their preferred source of energy.

At the same time, he said, China’s new economic policy favors a shift from heavy industry such as manufacturing to a lighter, more modern and less polluting economic base.

“At the end of last year, during the Chinese Communist Party congress, [Chinese] President Xi [Jinping] came up with the motto of making the skies of China blue again, which means putting a lot of emphasis on clean energy, and energy efficiency,” said Birol, a Turkish economist and energy expert who has headed the Paris-based organization for just over two years.

“By the end of 2017, China was No. 1 in solar, No. 1 in wind energy, No. 1 in electric cars and No. 1 in nuclear plants,” he said. “This has implications for all energy markets. China is changing, and given the sheer size of the country, everything else will change.”

Things are changing in India as well. For this reason, Birol advised his audience to keep his eye on those two giant countries, which together comprise 36.5 percent of the world’s population.

“Decisions which are made in New Delhi or Beijing will affect all of us,” he said, noting that six out of ten solar panels sold in the world today are produced by Chinese manufacturers.

“As a result of government policies, electric cars are growing substantially, and we believe that in twenty years’ time we may well have 300 million electric cars”—up from the current worldwide fleet of only two million such vehicles, he said.

But oil demand for passenger cars will decline slightly compared to today, he said. At the same time, demand for oil is rising because of a rapid proliferation of trucks, jets, and petrochemical plants—particularly in Asia. In fact, he said that more than 30 percent of the growth in demand for oil worldwide is coming from the Asian trucking industry.

“Every day, you see news about electric cars, and yet nothing about trucks,” he said. “But trucks use the same amount of oil and have more emissions than cars. Today, more than fifty countries have fuel-efficient standards for passenger cars, but only four have standards for trucks.”

Birol discounted the popular notion that electric cars are the answer to climate change. He noted that even if the use of electric vehicles (EVs) becomes as widespread as predicted by 2040, its impact on total global CO2 emissions will be less than 1 percent.

“This is because of two reasons,” he said. “First, cars in general are not a major source of CO2. Second, for electric cars to run, you need electricity from power plants, so we’ll still be using a significant amount of oil, gas or coal.”

“Electricity demand will grow twice as fast as total energy demand,” he predicted. “Air conditioning is becoming a major source of energy consumption. So is digitalization. Last year, for the first time in eighty years, electricity investments were higher than oil and gas investments.”

Even so, about 1.1 billion people—or some 20 percent of the world’s population—have no access to electricity, most of them live in sub-Saharan Africa.

Thani Ahmed Al Zeyoudi, the United Arab Emirates’ minister of climate change and environment, said that his government’s goal is for 25 to 30 percent of all electricity to be generated from nuclear and solar energy by 2030.

“Today, renewable energy is the new black gold. We see a future in renewables, but we need to build trust,” said Al Zeyoudi. “Everywhere we go, we hear about climate change. But this increase in greenhouse gases can be avoided only if we look to renewable technologies. There is a future, it’s happening now, and the prices are coming down. If you can generate the same amount of energy at a cheaper cost, why not?”

“We are witnessing today a global energy transformation driven by the convergence of technologies. We are seeing renewable costs falling rapidly, and energy storage coming into play,” said Al Lamki, estimating that by 2040, the world will need nearly $10 trillion worth of new investment just to keep up with energy demand. Nearly 70 percent of that, he predicted, will come from photovoltaic and wind energy.

Wrapping up the two-day conference, Frederick Kempe, president and chief executive officer of the Atlantic Council, praised the World Energy Forum as “an extraordinary gathering of the best and brightest in energy” and thanked the event’s sponsors and partners.

“I heard about rising oil prices amid geopolitical risks, I heard about falling extremism amid setbacks for ISIS, about new Saudi reforms and Iranian protests, and about the new geopolitics of energy. We’ve covered some serious ground,” said Kempe. “For us, we see this not just as a conference or forum, but the building of a community of interests to create a better world.”

Among other things, he said, “we learned that we cannot live with just one form of energy. Different forms of energy will co-exist. The competition will be to make all of them cleaner and more affordable. We need to live with less.”

Al Mazrouei added that he doesn’t believe oil demand will peak in the near or medium term—even as renewable energy sources continue to proliferate.

“If we want to have enough energy for all, every individual on this planet needs to be wise in our consumption,” he said. Otherwise, warned the minister, “Planet Earth is not going to be livable.”

Image: “By the end of 2017, China was No. 1 in solar, No. 1 in wind energy, No. 1 in electric cars and No. 1 in nuclear plants,” Fatih Birol, executive director of the International Energy Agency, said at the Atlantic Council’s Global Energy Forum in Abu Dhabi on January 13. “This has implications for all energy markets. China is changing, and given the sheer size of the country, everything else will change,” he added.