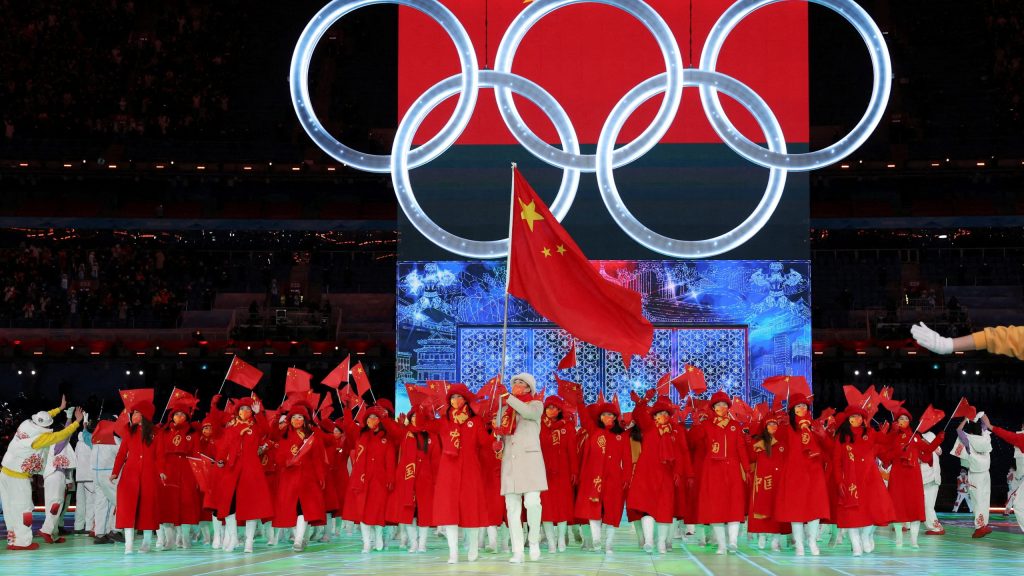 The slogan for this year’s Winter Olympics in Beijing, which kicked off with Friday’s opening ceremony, is: “Together for a shared future.”

But in reality, these games are one of the most fractious in recent memory—from the controversial 2015 selection of Beijing as the host city, to the human-rights abuses in Xinjiang that have sparked international boycotts, to a pandemic lockdown that will prevent many people from seeing the games in person.

Dating back to ancient Greece, the Olympics have been a time for pausing armed conflict and letting athletic competition take over the world’s imagination. But with Russian troops amassed at the border of Ukraine, no amount of figure skating, bobsledding, or even curling can fully distract the world from the stark realities that surround these games.

That doesn’t mean this year’s event doesn’t count; it just means we should pay attention to the bigger picture. So in keeping with the spirit of competition, here are five key areas of the strategic contest between the United States and China to watch carefully in the month ahead—since the broader struggle between the world’s largest two economies will define the coming decades, not just this month.

1. The race for the future of money

Two weeks ago, the US Federal Reserve released a long-awaited report on the potential of creating a “digital dollar,” which acknowledged the many benefits of Central Bank Digital Currencies (CBDC) and recognized that some countries are moving ahead quickly. As the Atlantic Council’s own research shows, ninety-one central banks—representing more than ninety percent of the global economy—are exploring a CBDC.

At the head of the pack is China. The People’s Bank of China began its digital currency research in 2014 and since then developed the world’s largest pilot program. According to official estimates, 260 million Chinese citizens have opened digital yuan wallets in the past year—and the financial implications could send shockwaves both domestically and abroad.

That’s because if and when the digital yuan is fully launched, it may eventually crowd out leading Chinese fintech giants such as Alipay and WeChat Pay, which currently account for more than 90 percent of domestic mobile payments in mainland China. The growth of these private companies is one of the many reasons the People’s Bank is rolling out digital yuan so quickly, with the aim of regaining full state control of the financial system. And while the digital currency is only for domestic use now, foreign athletes and coaches will be able to use it at the Olympics to buy anything from souvenirs to apres-ski drinks. All that’s required is to upload their passport information.

The challenge for the United States, Europe, and other countries is to develop an alternative model to the digital yuan in the year ahead—one that respects users’ privacy but also offers the same promise of faster, cheaper, and safer payments. See below how China is developing its CBDC and click on the image to explore the entire interactive database:

The Biden administration has trumpeted the importance of democracies standing up for liberal values in the face of resurgent authoritarianism. A major pillar of that effort has been increasingly rallying those governments to speak out against mounting human-rights abuses in China.

But while a number of countries have staged a diplomatic boycott of the Olympics in protest against these abuses (meaning their athletes would complete but no top officials will attend), many leading democracies have not—underscoring the challenge of forging a unified approach to China’s growing repression at home and its coercive behavior abroad. Among the conspicuously quiet countries is Germany, whose foreign minister said she won’t attend the games as a personal decision.

Meanwhile, China has announced that thirty-two heads of state, governments, royals, and international organizations committed to attending the Olympics, declaring the “bankruptcy” of US calls to boycott the event. Numerous other countries across the Global South support Beijing’s hosting of the games and have derided the supposed mixing of sports and politics.

US leadership on a boycott was the right call, and it has not gone unnoticed that China’s Olympic support consists mainly of non-democratic countries. But still, these dynamics only highlight China’s global influence and the challenge the United States faces in rallying support for democracy and human rights—especially when China is promoting its authoritarian model and undermining rights protections in multilateral institutions.

In total, nations making up some 30 percent of the global economy won’t be sending their senior diplomats to Beijing this year—a combination of politically motivated boycotts and absences ostensibly related to COVID-19 (such as Japan’s decision to bow out).

But the fact that not a single corporation has withdrawn its sponsorship surely lessens whatever sting the United States and other democracies may have intended. CEOs have been saying, fairly, that their sponsorship is about the athletes and competition—and licensed through television rights—not the particular host country. While this is accurate, the strange spectacle of a Chinese celebration Friday night followed by feel-good advertisements from major US companies can easily be viewed as turning a blind eye to the dark reality on the ground.

This is part of a larger trend of corporations wanting to continue to invest in China without making too much noise. As our own China Pathfinder project has shown, the country’s venture capital (VC) as a share of gross domestic product (GDP) is now the third-highest in the world—trailing only that of the United States and the United Kingdom—and is picking up steam heading into 2022. That’s a significant acceleration of both domestic and foreign VC at a time when both Washington and Brussels are actively pursuing a harder line toward Beijing. That’s why the divergence—or convergence—between financial capitals and political capital when it comes to China policy is one of the most important signals to watch in the year ahead.

One hallmark of President Xi Jinping’s China is its citizens’ dwindling access to information that’s not approved the government. From a crackdown on remaining quasi-independent Chinese media outlets and stepped-up online censorship to a campaign against what it terms the “infiltration” of Western ideas into China, the Communist Party has cemented greater control over information. Available content increasingly consists of fawning coverage of Xi and his successes, such as containing COVID-19 more effectively than the United States and standing up for China on the global stage. News about the United States spotlights political dysfunction and polarization, contributing to increasingly negative perceptions of the United States in China.

US news consumers, meanwhile, read about well-documented human-rights abuses in Xinjiang and Hong Kong, Beijing’s military and economic coercion around the world, government surveillance, and cyberattacks. Not surprisingly, American views of China have grown more negative.

Barriers to foreign media access in China in recent years have further reduced information about what’s happening inside the country. Events around the Olympics have exacerbated this trend: Foreign correspondents are complaining that they’ve been blocked from events normally open to the press, with the Foreign Correspondents’ Club of China publishing a scathing report on the “breakneck speed by which media freedom is declining in China.”

Authorities have shut down critical social-media accounts ahead of the games and pledged to punish anyone who speaks out against the official narrative that the games represent China’s successful rise under the party. Beijing is trying—though unsuccessfully, it would seem—to manufacture US perceptions of the games by paying at least one US media firm hundreds of thousands of dollars to have social-media influencers present an uncritically positive view.

As the strategic rivalry between their two governments deepens, the Chinese and American people are also increasingly consuming completely different narratives about each other.

5. The costs of a COVID crackdown

China’s zero-COVID policy is about to be on full display to the world. Already, hundreds of foreign athletes have tested positive upon arrival and been placed into quarantine. Over the past two years, Xi has been able to point to the high rate of death in the United States, as well as a chaotic response to the pandemic, as evidence of the superiority of China’s system of governance. But if the pandemic becomes endemic and economies fully reopen, the Communist Party will have a difficult time continuing the contrast.

As the Chinese people may be watching the world reopen, their economy is facing a historic slowdown: A crisis in the property sector, combined with demographic headwinds and the impact of a zero-COVID policy, may push Chinese GDP growth below 5 percent for only the second time in thirty years. If US growth ends up above 4 percent, as predicted, the current narrative of China coming out of COVID stronger might need some serious rewriting.

But it may be difficult for Xi to change course and abandon the party’s narrative of success in containing COVID. He’ll be particularly averse to admitting any mistakes during a politically sensitive year ahead of the Twentieth Party Congress in the fall—at which the strongman is expected to receive an unprecedented third five-year term. If it endures, the zero-COVID policy will ensure that China remains relatively isolated internationally, with strict limits on entry and limited travel for officials, even as much of the world (hopefully) returns to something closer to normal.

Josh Lipsky is the senior director of the Atlantic Council’s GeoEconomics Center.

Image: The China contingent is seen during the opening ceremony of the 2022 Winter Olympics in Beijing. Photo by Phil Noble/REUTERS