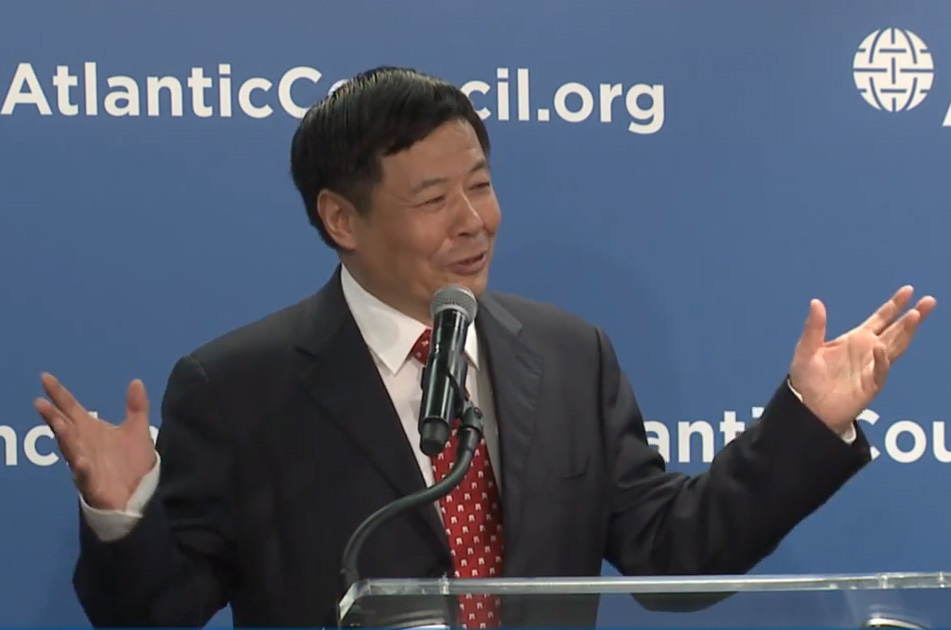 “China heard from the US and others that they want high standards; we agreed,” Chinese Vice Finance Minister Zhu Guangyao said of the Asian Infrastructure Investment Bank (AIIB) April 17 at the Atlantic Council.

China’s proposed Asian Infrastructure Investment Bank (AIIB) will have a constructive and complementary relationship with both the World Bank and the Asian Development Bank and is not intended to “overthrow” either institution, Zhu Guangyao, China’s Vice Minister of Finance, said April 17 at the Atlantic Council.

Instead, the AIIB will focus on economic development—particularly investing in Asia’s enormous infrastructure needs—and will be based on the rule of law, he said.

Zhu said he hoped the AIIB would fill Asia’s funding gap for infrastructure development and offer real capacity to mobilize private capital. His assurances came just days after the Obama administration—which has been leery of the AIIB—appeared to soften to the idea of the new bank.

US Treasury Secretary Jack Lew, in a March 31 speech at the Asia Society in San Francisco, said the United States “stands ready to welcome new additions to the international development architecture.”

In a discussion moderated by Olin Wethington, Nonresident Senior Fellow at the Atlantic Council’s Brent Scowcroft Center on International Security, Zhu said the AIIB would be based on the rule of law. Now that the bank’s founding members are in place they will meet later in April to decide the bank’s mandate, a process that is expected to be completed in a few months.

“Everything should be decided by real negotiations,” said Zhu.

“China heard from the US and others that they want high standards; we agreed,” he added.

Despite initial US opposition, some of its European partners, including Britain, Germany, France, and Italy, as well as India, have joined the AIIB. Iran, too, has joined the bank as a founding member.

In an April 9 address at the Atlantic Council, Christine Lagarde, Managing Director of the International Monetary Fund, described the AIIB as a “great initiative” and said the IMF would cooperate with the new bank.

Zhu said the Chinese proposal for the AIIB was based on a real demand for infrastructure development in China and was, in part, a response to the World Bank shifting its focus toward social development in the early 2000s.

Zhu urged members of the US Congress to ratify the IMF’s quota and governance reforms, which the fund agreed to in December 2010. These reforms would reflect the reality of the times and give emerging-market economies such as China, India, and Brazil a bigger say in IMF decision-making, while doubling the fund’s resources.

But the reluctance by Congress to ratify the agenda has tarnished the reputation of the IMF as well as the G20 grouping of major economies, and the United States itself, said Zhu.

Even so, Zhu said China remains an important IMF and World Bank member, noting that “those agencies are also our agencies.”

Atlantic Council Chairman Jon M. Huntsman, Jr., said in his opening remarks that China is playing “a larger role in shaping the  global economic order and is calling for adjustments in the existing economic and financial architecture.”

Noting China’s difficulties in transforming its economy to a “new normal,” he added: “We are undoubtedly facing a transformational period in Asia, where there are great opportunities to pursue common interests, but also serious potential risks of fragmentation in the finance, monetary, and trade architecture.”

The United States and China will have a chance to engage at the highest level when US President Barack Obama hosts his Chinese counterpart, Xi, on a state visit to Washington in September.

Zhu said there are high expectations of that meeting.