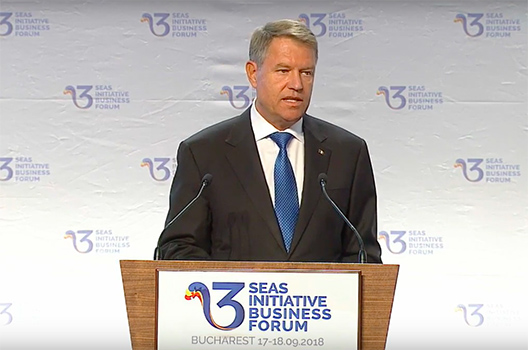 Central European leaders gathered in Bucharest on September 17 to discuss ways in which to deepen regional economic integration and send a clear message of their desire to see the region play a greater role on the world stage.

“We are here today [not only] because we are part of the European Union and NATO,” Polish President Andrzej Duda said, but also because “we want to be a significant player. We would like Central Europe to be a developed, well-integrated, and structured part of the Euro-Atlantic world.”

Romanian President Klaus Iohannis hosted the third summit and first business forum of the Three Seas Initiative in Bucharest on September 17-18. The initiative brings together twelve European Union (EU) member states from the area that borders the Baltic, Adriatic, and Black Seas, to discuss common infrastructure and development programs to jumpstart the region’s economy.

The central purpose of the initiative, according to Croatian President Kolinda Grabar-Kitarovic, is to “make Central Europe the backbone of European resilience,” by focusing on economic convergence, cohesion within the region and the EU, and building competitiveness. Her remarks came at an opening panel discussion with Iohannis, Duda, Austrian President Alexander van der Bellen, European Commissioner for Regional Development  Corina Cretu, and Ian Steff, US assistant secretary for international trade administration at the US Department of Commerce. Retired Gen. James L. Jones, Jr., the interim chairman of the Atlantic Council, moderated the discussion.

Grabar-Kitarovic particularly stressed the need to “achieve a realistic economic convergence of the initiative countries towards the west of Europe.” She listed the ongoing “uneven development and under development” of Central European countries as “one of the key weaknesses of the European Union.” Real progress toward bringing the region more in line with its western neighbors would help European countries, she hoped, from “dividing ourselves into old countries and new countries,” but rather seeing all as “equal members of the European Union.”

Iohannis argued that jump-starting Central Europe’s economy is crucial for the region to have any aspirations of global political influence as “in the world we live in, states’ most important foreign policy objectives and even national security objectives are tied to the promotion of our citizens’ economic interests and well-being aspirations.”

The Three Seas countries kicked off the summit by signing a joint statement creating a network of chambers of commerce, as well as a letter of intent in relation to a new Three Seas Fund to raise investment for common development projects. Duda lauded these actions for giving the member states new “tools… to continue our cooperation with greater efficiency than before… [with which] we will strengthen the process of modernization of Central Europe.”

Duda stressed that the Three Seas partner countries are “not standing still,” but are “in the execution phase” of turning their “ambitious plans” into real action. He said that the initiative countries have agreed on a list of priority projects, including the planned north-south Via Carpathia road network, a new north-south gas corridor, and other digitalization projects.

These new programs were praised by Van der Bellen, whose country, Austria, is “land-locked at the crossroads of north-south corridors and east-west connections.” He noted the importance of the initiative for the overall health of the European economy and celebrated the attendance of EU and German officials at this year’s summit.

He also highlighted the need for energy projects to remain a prominent priority for the initiative, as “energy security… remains a precondition to realize innovation, growth, and our common potentials.” He argued that both “diversification of energy sources and diversification of transport routes” were needed to achieve real energy independence for the region and Europe as a whole.

In a departure from his colleagues, Van der Bellen explicitly endorsed the Nord Stream 2 pipeline in his remarks. The pipeline, which is set to deliver gas from Russia across the Baltic Sea to Germany and Western Europe, has been supported by Berlin, but received heavy criticism from other Central European countries and the United States.

The Central European leaders all stressed the importance of working closely with the United States on the Three Seas projects. Steff conveyed in his remarks that US President Donald J. Trump’s administration is “highly supportive of the overall goals of the Three Seas.” Noting the presence of many US businesses at the event, he said “the Department of Commerce and the United States government sees a great deal of commercial potential for US companies to participate in Three Seas-related projects.”

Duda said he plans to raise the Three Seas projects with Trump, who attended the 2017 Three Seas Initiative summit in Warsaw, when the two leaders meet at the White House on September 18. US Secretary of Energy Rick Perry will attend and speak at the summit on September 18.