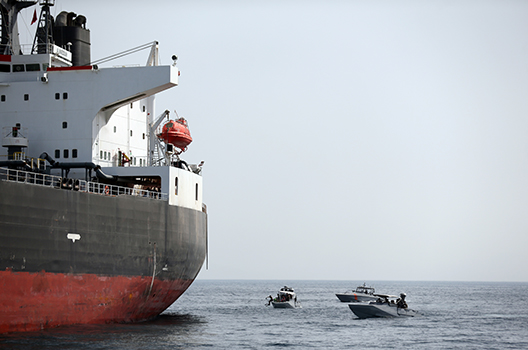 Drones purportedly flown by Houthi rebels in Yemen attacked Saudi oil pumping stations on May 14, creating a new flash point in a region already on edge over rising tensions between the United States and Iran.

A Houthi military official claimed the group launched multiple attacks against “vital Saudi installations” using drones to deliver bombs. The Houthis have been fighting the Saudi-backed government in Yemen since 2015.

Saudi Energy Minister Khalid al-Falih denounced the attacks as an “act of terrorism,” but maintained that production at Saudi oil installations was not disrupted and so far there have been no reports of injuries or fatalities.

The attacks come a day after officials in Saudi Arabia and the United Arab Emirates claimed four oil tankers were damaged by “sabotage,” although it was unclear what damage had been done to them. US officials suspect Iran or its allies could be behind the tanker attacks.

Tensions between the United States and Iran have sharpened over the past few months. In April, US President Donald J. Trump took the unprecedented step of designating the Islamic Revolutionary Guard Corps a foreign terrorist organization. Iran responded by branding the United States a “foreign terrorist organization” and US troops in the Middle East “terrorist groups.” On May 5, US National Security Advisor John Bolton said the United States was deploying the USS Abraham Lincoln carrier strike group to the Persian Gulf “to send a clear and unmistakable message to the Iranian regime that any attack on United States interests or on those of our allies will be met with unrelenting force.” The New York Times also reported on May 13 that White House officials are reviewing plans to send as many as 120,000 troops to the region should Iran attack US personnel or US allies.

In a separate development, Iran announced on May 8 that it is reviewing its continued compliance with the 2015 nuclear deal—known as the Joint Comprehensive Plan of Action—one year after the United States withdrew from the pact over concerns that it did not stop Iran’s support for terrorism and aggression in Syria and the wider Middle East.

We asked Atlantic Council experts what they believe will be the broader implications of the attacks in Saudi Arabia. Here’s what they had to say:

“Connecting the dots in this case appears at first glance to be relatively straightforward, especially for those used to tracking Iranian asymmetric operations. First, the Iranian foreign minister warns of ‘accidents’ to come given heightened tensions; then the United States announces intelligence indicating Iranian plans to attack US interests and allies; then the United Arab Emirates (UAE) and Saudi Arabia announce sabotage attacks against oil tankers; then the Saudis report drone attacks against Saudi oil infrastructure, attacks later claimed by Iranian-backed Houthis in Yemen. There is little reason not to expect more to come along these lines, which increases the danger of mistakes, miscalculations, and escalations leading to a wider military conflict.

“However, not everyone is willing to assume Iranian responsibility and many of those are unlikely to accept the word of the governments in Saudi Arabia, the UAE and, alas, even the United States. It is critical, therefore, that the Trump administration publicly present a clear case for Iranian culpability that withstands the expected scrutiny—especially if this ends up being a precursor for US military action down the road.

“Getting such a presentation wrong has longstanding negative implications for US national security policy. The Clinton administration’s counterterrorism efforts against Al Qaeda never recovered from the questions surrounding the CIA’s weak explanation of the intelligence used to target the Al-Shifa pharmaceutical factory in Sudan in 1998. As a result, there was insufficient political support for additional military actions against Bin Laden until after 9/11. And the Bush administration’s campaign in Iraq never recovered from its overstatements regarding the intelligence linking Saddam Hussein to Al Qaeda and to weapons of mass destruction. The United States has remained politically divided ever since on this issue, which has contributed to the serious mistakes made on US policy toward Iraq by the two administrations that followed.”

“The attacks on two oil pumping stations in Saudi Arabia expose how vulnerable the market is to geopolitical supply shocks. Before the reimposition of US sanctions on Iran on May 2, Saudi Arabia maintained much of the spare capacity in the oil market. However, Riyadh has promised to meet all oil demand from former buyers of Iranian crude, which could mean up to 500,000 barrels per day (bpd) of additional production while still remaining within their OPEC+ quota. These attacks against Saudi’s only pipeline to the Red Sea, combined with reports of sabotage of Saudi oil tankers off the coast of the United Arab Emirates and Iranian threats to close the Straits of Hormuz, represent a risk that if any Saudi production is taken offline, the market’s ability to replace missing Iranian barrels while still maintaining some spare capacity is seriously in question. However, this risk is at least partially mitigated by the increasing US-China trade tensions and increasing tariffs, which are presumed to dampen global oil demand. These two countervailing forces are among a number of wild cards that are causing unprecedented oil market volatility, which only looks to get worse over the second half of 2019.”

“The Saudi and Emirati war in Yemen is premised on the assumption that the Houthis pose little to no threat to their homelands. The allure of such ‘cheap wars’ is what keeps drawing the United States into overseas conflicts. The drone attack on Saudi oil pipelines claimed by Houthi rebels hints at how new technologies can change the balance of power on the battlefield, and transform the risk factors for foreign entanglements.”

Holly Dagres, editor of the Atlantic Council’s IranSource blog, and a nonresident fellow with the Middle East Security Initiative in the Scowcroft Center for Strategy and Security:

“Every incident raises tensions between the various parties creating a hair-trigger for war in the region. What will likely start a conflict won’t be a clear, direct attack but rather a misunderstanding.”

“An attack by the Houthis in Yemen on Saudi oil infrastructure west of Riyadh would demonstrate an advancement in Houthi capabilities, but is not out of line with current rhetoric and tactics the group has used within Yemen. Recent assessments by the UN panel of experts on Yemen and a May 2 report by The Wall Street Journal indicate that the rebel group has a new “UAV-X” drone with the ability to travel up to 1,500 kilometers, potentially putting the two pumping stations, as well as Riyadh and Abu Dhabi, within maximum range.

“Attributing the attack specifically back to Iran is more difficult. Previous editions of UAVs used by the Houthis have shown similar characteristics to Iranian models, and some reports claim evidence that Iran is smuggling drones and parts into Yemen (although the Houthis maintain that they have the capability to manufacture drones domestically). But even if Iran supplied the Houthis with this weaponry wholesale, with full knowledge that it would expand the range and impact of Houthi attacks to Saudi and Emirati capitals, there is little evidence that Houthi activities are under direct control of Iran.

“The clearest fallout may be in Yemen itself. Regardless of whether Iran is considered to be behind the attack, ongoing peace negotiations are likely to suffer. Houthi forces are meant to have been unilaterally withdrawing forces from key ports, including Al Hodeidah, this week as a “good faith” move ahead of further implementation of the Stockholm Agreement. One of the key obstacles to implementation is the lack of trust between the Houthis and the Saudi-led coalition, and this attack may further deepen Saudi mistrust. The UN Security Council is slated to receive a briefing from UN Special Envoy for Yemen Martin Griffiths tomorrow on the status of Houthi force redeployment, but with this latest news it remains to be seen how Griffith’s report will be received by the Saudi-led coalition or whether the latest progress will hold.”

Image: UAE Navy boats next to Al Marzoqah Saudi Arabia tanker are seen off the Port of Fujairah, UAE May ,13, 2019. (REUTERS/Satish Kumar)