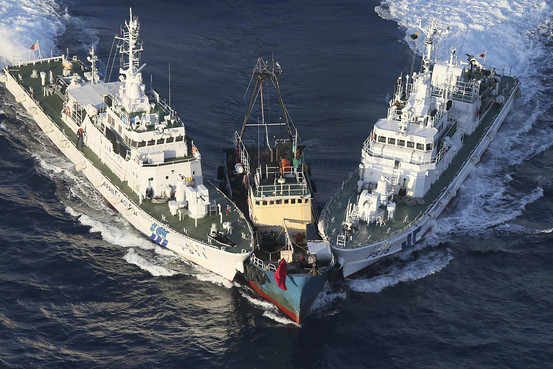 It just won’t go away—and it may be Asia’s contemporary equivalent to Archduke Ferdinand, whose assassination sparked World War I.

In recent weeks, a nearly daily occurrence near the disputed rocks are visits by Chinese ships. Carefully chosen maritime-surveillance or fisheries-agency (not military) ships have hovered on waters just outside the twelve-mile territorial limits (but inside the two-hundred-mile economic zone) of the Senkaku islands, which Japan controls and China calls the Diaoyu. These five lonely islets jutting out of the East China Sea are inhabited by a few dozen goats.

But the Sino-Japanese dispute has heated up in recent months. Nationalist sentiments are coming to a boil and crippling relations between two of the world’s largest economies. These tensions are emblematic of larger trends in East Asia. South Korea and Japan are also in the midst of a similar dispute over even smaller and more inconsequential rocks, Dokdo, which are called Takeshima by Japan. So spun up are the Koreans (not coincidentally in an election year) that their President Lee Myung-bak became the first Korean leader to ever visit the rocks last August. The Korean government, at public expense, supports a single couple living there so they can say it is inhabited. Lee called the tiny specks of land “a place worth staking our lives to defend.”

And it doesn’t end there. In the South China Sea, similar disputes exist between China and Vietnam over the Paracel islands; there are also the Spratlys, where China is pitted against Vietnam, the Philippines and Malaysia (each with claims over one or more of the tiny reefs).

This is about far more than the rocks and the purported (and much exaggerated) oil and gas lying offshore of the various islets. In fact, what recoverable oil and gas that is adjacent to any of the disputed territories is highly unlikely to garner the investment required in offshore-drilling technology, until the legal and political status of the respective territories is resolved. Rational actors would opt for joint economic development. Nor is it about strategic advantage in the shipping lanes. Who, besides pirates or terrorists, has an interest in shutting down global trade?

The core of these disputes is much more troubling than any of these geopolitical considerations. That’s because it is not something rational actors can reason their way through. It is highly emotional and irrational—so much that it is putting a nearly $20 trillion regional economy at risk.

In the case of Japan and both China and South Korea, it is primarily about historical memory scarring the respective national narratives of two proud, highly successful, modern economic and political powers. This was articulated recently by Liu Xiaoming, China’s Ambassador to the United Kingdom, writing in the Financial Times:

Many historians have compared postwar Japan and Germany. Their conclusions are consistent: unlike Germany, Japan has never seriously reflected on its behavior during the second world war. War criminals are still worshipped at the Yasakuni shrine in Tokyo. . . . Japan’s leaders have occasionally offered grudging apologies but these have never convinced its neighbors.

This pathological predicament gives new meaning to the term “living history.” Unhealed psychic wounds, including a sense of humiliation and shame in response to the trauma of Japan’s colonial roles in both Korea (1910-45) and China (in the 1930s) grate against the buoyant economies and dignity of both the ROK and China. Even accounting for the political excesses of a generational leadership transition in China and a presidential election in the ROK, such nationalist outpourings cut to the essence of national identities of modern China and Korea. There is also an element of national memory at play in Sino-Vietnam disputes in the South China Sea. Though U.S. policymakers in the 1970s seemed oblivious to it, China and Vietnam have a two-thousand-year history of confrontation.

Where Does it Lead?

Yet even as tensions boil in the multitude of Asian territorial disputes, the region continues apace with its economic and financial integration. Several weeks ago, the ASEAN+6 (China, India, Japan, S Korea, Australia and New Zealand) announced that it would launch negotiations in January for the creation of a new trade accord, the Regional Comprehensive Economic Partnership (RCEP). And on the financial front, they recently agreed to double the available pool of foreign reserves for available swaps in a crisis in the Chiang Mai Initiative (ASEAN, China, Japan and the ROK) to $240 billion.

If this behavior pattern seems a bit schizophrenic, that’s because it is, more or less. Given that for most of the past four decades East Asians have been preoccupied with making money—and constitute one of the most impressive examples of rapid economic development in history—does not this potentially explosive nationalism put that success at risk? That was certainly the story in Europe, 1914, despite the assurance of Norman Angell’s 1910 bestseller, The Great Illusion, which argued that the world’s then-unprecedented trade and financial interdependence made war impossible.

Does Asia need to repeat the experience of two catastrophic world wars before it sorts out its nationalist pathologies? Perhaps. Certainly the reality in Asia is that there is nary a country that would formally accept its current borders as final. But there is a larger question: does it matter in this age of the knowledge economy? After all, we are not talking about disputes over Alsace-Lorraine, Manchuria or the Korean Peninsula. We are talking about tiny outcroppings that combined have no more land mass than Hong Kong. If you “win” on such disputes, what exactly do you gain, other than feeling good because the other claimant lost? In the information-age global economy, tiny nations like Singapore are larger players than nations with several orders of magnitude more land.

Americans tend to think that all problems have solutions. Unfortunately, that is not always the case. Some problems can only be managed. Conflict in East Asia cannot be ruled out. Nationalism combined with ever-more-capable military forces may well boil over.

And for the United States, which has treaty allies in the mix, such conflict would create a difficult quandary. The Senkakus are controlled by Japan, whom we are obliged to defend if attacked. More bizarre is prospective hostility between two U.S. allies, the ROK and Japan. In a conflict between Seoul and Tokyo, where would that leave Washington?

Considering the role of national honor, a resolution of the various disputes may simply be too hard. Which nation would accept the loss of face? Some have suggested submitting the various competing claims to the International Court of Justice at the Hague as a face-saving way out. But there are few clear cut cases. The Law of the Sea Treaty does not provide guidance for overlapping claims, which in some cases are among three or more claimants. And who decides whether historical arguments (e.g. “We found the Senkakus first!”) or treaties resulting from conflict take precedence?

The optimistic scenario is that over time the passions become less intense, and the desire for economic prosperity dominates, with many of these disputes lingering—as they have over the past half century—as irritants. There are precedents in both the Arctic and Southeast Asia of putting aside sovereignty claims and jointly developing resources. That could lead to a manageable if inconclusive outcome. But who would bet the mortgage on it?

Robert A. Manning is a senior fellow at the Atlantic Council. He previously served in the State Department as a senior advisor to the Assistant Secretary for East Asia and the Pacific (1989-93) and on the Secretary’s policy planning staff (2004-08). This piece was first published on The National Interest.