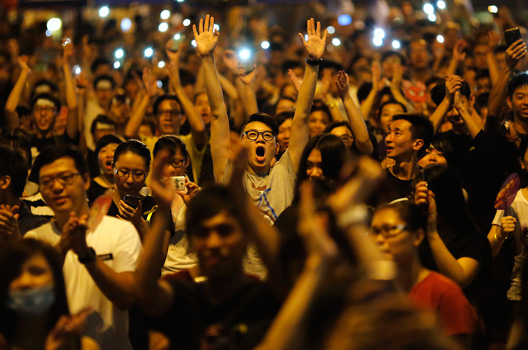 The government of President Xi Jinping is conducting “one of the harshest” Chinese campaigns against civil society and peaceful dissent in the past decade, according to a prominent human rights activist. The campaign has come amid the pro-democracy protests that have roiled Hong Kong since September.

“We have seen off-the-charts harsh sentences,” Sophie Richardson, China director of Human Rights Watch, said at an Atlantic Council panel discussion on December 9. “The kinds of behavior for which people are being detained and considered criminal is really unprecedented,” she added.

Richardson cited cases where people have been detained for standing on street corners in Chinese cities holding placards bearing Xi’s quotes on corruption. Xi has unleashed a campaign against corruption since assuming office in March of 2013. He has promised to go after “tigers” and “flies” — a reference to powerful leaders and lowly bureaucrats.

“One person stands up in public and says these things and gets to run the country; somebody else stands on a street corner holding up a sign and gets detained. I think that is pretty clear indication of hostility toward freedom of expression,” said Richardson.

Beijing also has cracked down on the street demonstrations of Hong Kong’s Umbrella Movement, which has demanded since September that Beijing let Hong Kong hold a truly democratic election in 2017. The Beijing government and Hong Kong Chief Executive Leung Chun-ying have rejected this demand and insist that the Communist Party pre-screen all chief executive candidates.

Hong Kong police on December 11 arrested more pro-democracy activists as they cleared the last remaining Umbrella Movement protest camps, which have blocked roads in the financial center for more than two months.

Christopher K. Johnson, senior adviser and Freeman Chair in China studies at the Center for Strategic and International Studies, said: “Much of what we’re seeing with what’s happening in Hong Kong is that you have a very different leader in charge in China now, especially with regards [to] how he perceives Hong Kong.”

“His view is, quite simply, ‘Hong Kong is ours.’ . . . It’s a Chinese city, not some special place that gets all sorts of special rights and privileges,” said Johnson.

“There is very much a view on Xi’s part that Hong Kong is a bunch of petulant children . . .  With these mindsets, it is very difficult for them to take any other approach than what they have taken” in Hong Kong, he added.

Authorities in Beijing have detained more than 100 activists in China who expressed sympathy with the protesters in Hong Kong, and have barred Chinese students involved in the Hong Kong protests from returning to their homes on the mainland, Richardson told the Atlantic Council audience. China has ratcheted its Internet censorship against the Umbrella Movement so tight that Chinese companies manufacturing umbrellas are reporting difficulty in selling their products online, she said.

The Chinese government may go further and ask some foreign-funded NGOs to leave China in the coming year, Richardson predicted.

Both Richardson and Johnson said the response from the West—particularly the US and the UK—to the crackdown on protesters in Hong Kong has been tepid, which served to embolden China.

“The key takeaway, frankly, has been [the Chinese] are getting away with it for the most part. . . . Their view is: ‘We’ll just wait this out,’” said Johnson.

Last month, Chinese authorities banned British lawmakers from traveling to Hong Kong to conduct an inquiry into the handling of pro-democracy protests.

State Department spokeswoman Jen Psaki has said differences between Hong Kong authorities and protesters must be addressed “peacefully through dialogue.”

Johnson, meanwhile, said that the potential for the Hong Kong protests to spill over into mainland China is quite low. “The average Chinese does not see Hong Kong as the city on the hill any more. In fact, many of them view Hong Kong like petulant children, just like the leadership does. That gives the leadership a tremendous amount of room to be able to push this policy line they have been advocating because they have space with the public to be able to do that,” he said.

Alan D. Romberg, distinguished fellow and director at the East Asia program at the Stimson Center, discussed the impact of the Hong Kong protests on Taiwan and the island’s future relationship with Beijing. Taiwan’s voters on November 29 dealt a broad defeat to the ruling Kuomintang party, which has built up economic ties with China, instead electing local officials from the opposition Democratic Progressive Party, which is less amenable to such ties.

Still, overall, “the Hong Kong demonstrations have, in fact, had very little effect on Taiwan,” said Romberg. “The larger majority of people in Taiwan see little correlation between Hong Kong’s situation and their own,” he added.

Hong Kong was a British colony until control was handed back to China in 1997. Unlike Hong Kong, Taiwan is a robust democracy.

“Developments in Taiwan have had more effect on what has happened in Hong Kong than the other way around,” said Romberg, referring to the “Sunflower Movement” in Taiwan last spring, in which called on the government to scrap a controversial trade deal with China.