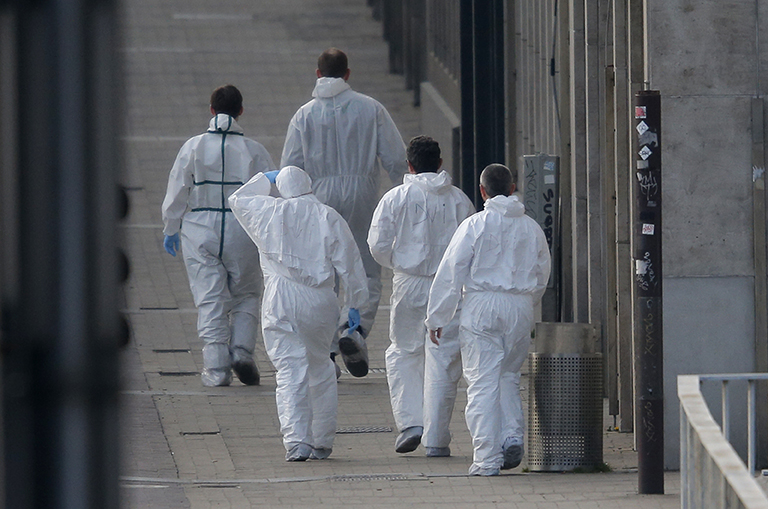 The terrorist attacks in Brussels that left at least thirty-six people dead on March 22 represent a failure of US and European intelligence, according to Howard Gutman, a former US Ambassador to Belgium.

“Most people have been focusing on Molenbeek and the Muslim community there,” Gutman said referring to the impoverished Brussels suburb. “They have been surveilling people, and yet no one had an inkling of this…This is a European, an American, and a global [intelligence] failure.”

Gutman said it was likely that the links to the Brussels attacks go far beyond Molenbeek.

Howard Gutman spoke in a phone interview from Brussels with the New Atlanticist’s Ashish Kumar Sen. Here are excerpts from our interview.

Q: What are your thoughts on the ISIS attack on Brussels?

Gutman: It is qualitatively different than anything that has happened in Belgium. This is their 9/11. There was a sadness, fear, and uncertainty that struck us. That is what the Belgians are experiencing. There is massive security everywhere, and yet no one quite knowing what they are facing.

Q: What has Belgium done since the Paris attacks to prepare for such an incident?

Gutman: Most people have been focusing on Molenbeek and the Muslim community there. They have been surveilling people, and yet no one had an inkling of this. So I think that this is a failure of global intelligence, not just Belgian. This is a European, an American, and a global failure. I suspect you are going to see links that go beyond Molenbeek in the planning of this attack.

Q: What is your assessment of the level of intelligence sharing between the United States and Europe?

Gutman: There is no question that even when I was Ambassador whatever intelligence we could pick up we shared immediately with the Belgians and vice versa. I know the Germans and the French also work very closely with the Belgians. There could be further global cooperation. Western Europe and America cooperate closely. We’ve had warnings before saying don’t go to the train stations, don’t go to the airports. Nobody had it this time.

Q: What is your assessment of intelligence cooperation within the European continent?

Gutman: Throughout Western Europe it is very good. If the Germans pick up noise in their areas they report it to the Belgians, and vice versa. I don’t know whether Turkey is working with the others.

Q: What are the broader implications of this attack for Europe?

Gutman: The broader implications are the same for Europe and for America, which is we have go to be vigilant. But it’s not like we have to crack down more on privacy, they have already been doing that. Whether it is San Bernardino or here or Paris, you have got to do all you can with your security apparatus, but it is a difficult task to do.

Q: Why does Belgium have a problem with radicalized Islam?

Gutman: It is easy to understand the roots. There are a lot of second and third generation Muslims in Belgium. There is high youth unemployment. They are not working for Deloitte; they are sitting on stoops. Many went to Syria originally after [Syrian President Bashar] Assad used chemical weapons on Syrian kids. They went to fight Assad and the Shia. But once you get to Syria you can’t tell the good guys from the bad guys even with a scorecard and so they end up falling in with different levels of Syrians — not just the moderate opposition, but Sunni extremists. It is not a great life, so they come back to Europe. Some disaffected groups are radicalized.

That explains certainly what happened in Paris, but I am not sure that this [the attacks in Brussels] wasn’t a broader plan. Once Belgium became a target after Paris, this may have been a plot hatched elsewhere given that the world’s spotlight was on Brussels.

Q: How will this attack change Belgium?

Gutman: It’s hard to see how you can because after Paris there were Uzis in front of every government building. The airport in Brussels is way more protected than [Washington’s] Dulles [airport] or [New York’s] JFK [airport]. I guess the next step that they can go is the Israeli step, that is you don’t get into the building until you clear the line inspections. That is way more security than you have in the United States.

Q: What should Belgium be doing more of to address the challenge of assimilating immigrants, particularly Muslim immigrants?

Gutman: There is a great deal that can be done. [Paris attack suspect Salah] Abdelsalam’s brother was married and the other one was blowing up Paris. You can’t substitute for parents, but clearly you can build bridges to the community to have them be proud Muslim Europeans who have jobs and are living the Belgian dream. Right now you have a large number of disaffected youth who have nothing better to do than to go fight in Syria and then they come back and fight in the West and they don’t feel part of European society.

We had a significant program at the US Embassy in conjunction with the [Belgian] Interior Ministry called Empowering Belgian Muslims that matched Muslims youths in the community with Muslim role models who were working for accounting firms or law firms and the like. If they consider themselves proud European Muslims instead of Muslims against Europe it is a different world.