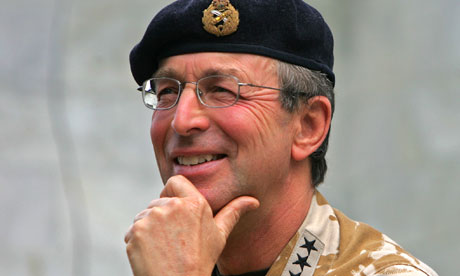 Two weeks ago, General Sir David Richards, Britain’s Defence Chief said, “We have a whole load of tasks expected of us.

Our political masters are quite happy to reduce the size of the Armed Forces, but their appetite to exercise influence on the world stage is, quite understandably, the same as it has always been”. Implicit in Sir David’s statement is a fear that the British Government could be about to make the greatest strategic error since the Suez fiasco in 1956, by implicitly and effectively abandoning Britain’s strategic partnership with the US through further defense cuts and insisting London can build a new defense relationship with Europeans, many of whom are cutting their armed forces to the point of extinction. It would be strategic illiteracy at its very worst reducing Britain to the third rank of defense actors and critically undermining wider strategic influence. Therefore, Britain needs a new Defence Covenant with a commitment from both major political parties to spend at least 2% of GDP (and that means real money) on defense for the next decade at least.

Britain is of course facing difficult economic choices but it is precisely such moments that coherent defense strategy is vital. Doing ever more with ever less is not strategy. Just around the corner major crises lurk in the Middle East, North Africa and beyond in which the British armed forces may not only be required to act but given the strategic brand they still represent will underpin all other tools of national influence. Moreover, defense expenditure in much of the world beyond Europe is booming. The one thing this world will guarantee is strategic surprise.

First, Britain’s military strategy needs to be lifted above the current muddle which still too often reflects an internal struggle between the services over money. As Britain shifts emphasis post-Afghanistan from land to sea, driven by the strategic choices being made by the Americans and the non-choices of Europeans, a powerful Royal Navy will be critical to British strategy. And yet, in spite of the two future super-carriers the Navy has only 19 serviceable surface ships to operate and network across five domains; land, sea, air, space and cyber and at least five oceans. The new Astute nuclear-attack submarines are reputed to leak and are too slow, whilst the new Type-45 destroyers are too few in number. A reasoned balance also needs to be struck between full-time and part-time forces. If the regular Army is cut again to 75,000 as is rumored then placing so much responsibility for Britain’s future operational élan on a new Reserve Army will be taking an enormous risk to say the very least.

Second, Europe’s great defense depression will lead Britain to rely more not less on the Americans with NATO critical as a planning and command nexus between three parties; North Americans and Europeans at very different levels of capability and strategic partners critical to defense grand strategy. NATO, with Britain and France at its core, will find itself the Atlantic wing of an American-led Western grand strategy which will span the Pacific. However, to make NATO Europe work London must lead by example and such strategy is only credible if the British retain armed forces which are seen by Washington and others as capable, adaptable, agile, sustainable, but above all powerful even if only modest in size.

Now, with vision and political and will all these problems can be fixed and the new system made to work. And, given the equipment planned a powerful and affordable future force is achievable. Therefore, the 2015 Strategic Defence and Security Review must make an unequivocally clear statement of ambition to rebuild Britain’s forces with funding to match. This will be the new Defence Covenant underpinning a revised force plan that will see Future Force 2020 as merely a milestone en route to Future Force 2025and then Future Force 2030. What matters is a clear force development strategy and no more cuts to the defense budget.

Cameron’s latest mantra is that Britain is engaged in a global race. What about the defense race? The government claims it will spend £160bn (c.$250bn) over the next ten years to rebuild the British armed forces, and that having closed the £38 billion (c$60bn) black hole in Britain’s defense budget money is coming available. However, the word is that the armed forces will take a further hit in the next Comprehensive Spending Review. Unfortunately, if London cuts the defense budget further not only will Britain’s strategic future be in jeopardy, but with it NATO and the alliance with the United States as London in effect chooses to tie itself solely to a defenseless continental Europe in headlong retreat and given events in the EU is fasting leaving Britain. History would not be kind. One deals with uncertainty by dominating it with strategy and capability not by cutting and prevaricating.

It is time for a new Defence Covenant and quickly.