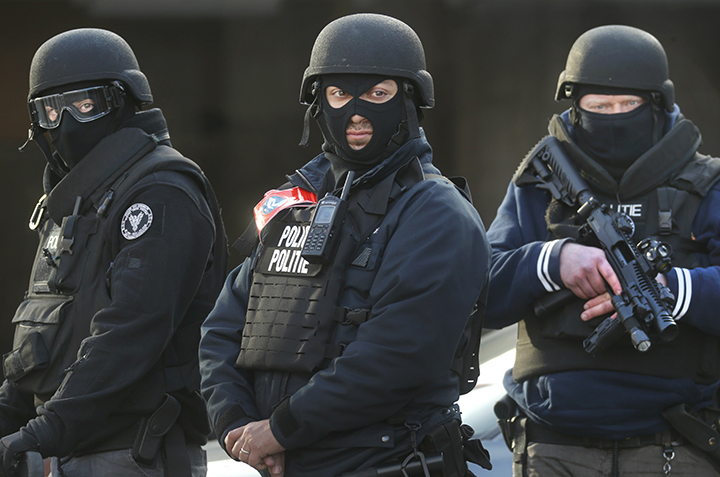 ‘When you are dealing with terrorists, absolutely the best defense is a strong offense,’ says Michael Morell, a former Deputy Director of the CIA

The bombings in Brussels on March 22 are a reflection of the Islamic State of Iraq and al-Sham’s growing “attack capability” in Europe, according to Michael Morell, a former Deputy Director of the Central Intelligence Agency who serves on the Atlantic Council’s board of directors.

The Islamic State of Iraq and al-Sham (ISIS) claimed responsibility for the attacks that left dozens dead in Brussels on March 22.

A US-led coalition has been conducting airstrikes on ISIS targets in Syria with a mission set by US President Barack Obama to degrade and ultimately destroy the terrorist group.

The challenge facing the United States and Europe is to gather enough information to thwart such attacks in the future, said Morell.

Michael Morell spoke in an interview with the New Atlanticist’s Ashish Kumar Sen. Here are excerpts from our interview.

Q: French President François Hollande said that through the Brussels attack all of Europe has been hit. What are the implications of this attack for Europe?

There are two implications. The first is that the Europeans have to do a much better job of defending themselves. What we saw today in the airport, for example, was an attack on the left side of security. They didn’t go through airport security, they conducted their attacks in the ticket area where people don’t have to go through security. The Europeans are going to have to adjust their security protocols to reflect what these guys are doing, which is attacking soft targets. They have to completely rethink their defensive posture here. With regard to that, they have to resource their police, intelligence, and security services to reflect the threat that they are facing.

The fact that different European security services are not able to track all the [suspects] that they know about because they simply don’t have the resources is a real problem. This has got to be addressed.

But the most important point I’d make regarding implication is that when you are dealing with terrorists, absolutely the best defense is a strong offense. You have got to take the fight to them. The only way attacks in Europe end—and by the way, these attacks are going to come [to the United States] at some point, no doubt about it—is to remove their leadership from the battlefield and take away their safe haven and their caliphate. There has got to be a serious rethinking in Europe, in Washington, and in the Middle East about how do we deal with the bigger problem here. [ISIS] is under pressure in Iraq and Syria, no doubt about it, but they still have their safe haven and their leadership is still protected.

Q: Do you think Belgium let down its guard after the Paris suspect was arrested last week?

Morell: I don’t think so. In fact, I think their guard was up. There is no doubt in my mind that the timing of this attack reflected that arrest. I think what happened here is that the cell in Brussels that Salah Abdeslam was working had attacks planned and this was one of them. When he was arrested on Friday the guys who were left decided to accelerate the attacks because they were concerned that he would talk to law enforcement authorities and that their attack would get disrupted. I truly think that, when they made the arrest on Friday, they knew of the security risks going forward and they actually raised their security level. But if you are not inside these cells, if you don’t have the intelligence, if you don’t get to see their communications you don’t get to see the attack coming. That’s why this is so dangerous and complicated.

Q: In light of the terrorist attacks in Europe—Paris and now Brussels—in what areas could security cooperation and intelligence sharing between the United States and Europe be expanded?

Morell: After Paris there were all sorts of comments by senior government officials that we should enhance information sharing. When I was Deputy Director of the Central Intelligence Agency, we shared everything we had with the relevant European authorities, and they shared what they had with us. So there is very good sharing. Information sharing is not the problem, getting enough information is the problem.

To disrupt individual attacks, you need very specific intelligence and that intelligence has got to come from discussions that you pick up in Iraq and Syria, or discussions that you pick up from the cell itself. You have to attack both of those from an intelligence and security perspective, and you have to do both at the same time so you can get the intelligence you need to disrupt the attacks. It is very difficult work. It takes resources and it takes time. There are a lot of things happening on the technology front that make it more difficult for us to disrupt these things. When these guys use apps with commercial encryption that no one can read they can stay under the radar screen.

Q: What lessons can Europe learn from the United States’ experience in preventing terrorist attacks on US soil?

Q: Why has Belgium become a hot bed for Islamic terrorism?

Morell: It is not just Belgium, it is also France, it is also, to some extent, London. It is anywhere that you have got a very large Muslim population and there are recent immigrants from Muslim countries who flop down in these largely Muslim neighborhoods and the countries do a horrible job of bringing them into their society. The kids don’t get the best education. They feel isolated. They are probably bullied in the schools they go to. They turn to look for a sense of community and a sense of belonging and look for something bigger and they find it in the ISIS and al Qaeda narrative. That’s why we see this in Paris and Brussels where there are a lot of these neighborhoods.

Everybody is focused on this particular event [the Brussels attacks] and how you stop these guys. We are not having enough of a conversation at all about how do you stop people from becoming terrorists in the first place? How do we deal with the social, economic, and religious issues that give rise to all this stuff in the first place? Our lack of attention to that is not surprising given that we tend to be focused on people who are trying to kill us now. But we are not really going to get our arms around this problem until we as the international community—the United States, Europe and every Muslim country in the world—gets together and figures out how do we deal with the bigger problem here? How do we stop the creation of these terrorists in the first place? I am not optimistic that we are going to do that, and that’s why I say to people that my kids’ generation and my grandkids’ generation are still going to be fighting this fight.