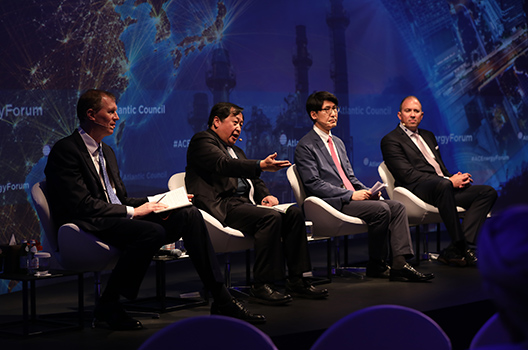 Growth in the global liquefied natural gas (LNG) market last year was “driven by Asia and that Asian component has been driven by China,” Anatol Feygin, executive vice president and chief commercial officer of Cheniere Energy explained at the Atlantic Council’s 2019 Global Energy Forum in Abu Dhabi on January 12.

The 30 million ton increase in the global LNG market in 2018 was almost exclusively due to growth in the Asian market, Feygin explained, fueled by a desire among China, Japan, South Korea, and others to “transition towards cleaner fuels.” While demand is up over all of Asia, “China is going to be for the foreseeable future a very large driver of natural gas demand and LNG as well,” Feygin said.

Wang Zhongying, the director general of the Chinese National Development and Reform Commission’s Energy Research Institute, said that he believes his country is in the first phase of a comprehensive energy transition, during which time cleaner sources of energy—such as natural gas—will be vital. “Our fossil fuels still count for almost 87 percent of total primary energies,” Wang explained. “Our priority is to reduce coal consumption. So during the first phase if we can use more and more gas, that will help us.”

The need for cleaner forms of fuel is not just limited to China, however, as Jennifer Gnana, an energy reporter for The National and the panel moderator explained. “Asian energy demand has been forecast to grow by 37 percent by 2025 and as a result of this growth it is expected to see an increase in energy imports by around 53 percent,” she said. At the same time, “due to the volatility in the price of oil as well as the pollution in metros seen in China and India there has been a growing transition of these economies to a more decarbonized energy model.”

“Three years ago, everyone knew for a fact that the world was going to be oversupplied with LNG,” recalled David Hobbs, a senior fellow in the Atlantic Council’s Global Energy Center. “The basis of that was a vast expansion of supply, but that the two potentially large importers, China and India, would not be able to pay the price necessary for LNG to come into their markets in a big way. What changed was the realization that social stability and public health was being affected by air quality and people were prepared to pay that price.”

In Japan, the Fukushima accident in 2011 has spurred action to replace nuclear power with other forms of fuel such as LNG, Yongsung Cho, president of the Korea Energy Economics Institute, said. South Korea’s attempted transition away from coal-fired power plants has spurred similar demand, Cho said. Despite a shared concern in procuring cheap LNG, Cho lamented, China, South Korea, and Japan have yet to undertake concerted cooperation in the energy market.

Asia’s growing appetite for LNG is also the subject of a new report by Atlantic Council senior fellow Jean-Francois Seznec, “Meeting Asian LNG Demand.” In the paper, Seznec explores the impact of LNG demand on the geopolitical relationships between LNG producers around the world and the new customers in Asia.

There is no guarantee, however, that Asia’s love affair with LNG will last, the panelists warned. One threat mentioned was the United States’ continued trade war with China, which saw Beijing slap a 10 percent tariff on imported US LNG in September. “It would be unfair for me to say that I am not against these tariffs that have been in place. I think it is additional friction in the market,” Feygin said. He trusts, however, that the global LNG market “is large enough and liquid enough to appropriately distribute the molecules to their most economically efficient destination.” Hobbs agreed saying he suspects that “the quantities of gas going into Asia will be totally unaffected by tariffs…but exactly whose gas goes where may be up for discussion.” While he does see the trade war as “a big impediment,” Feygin said, he “would prefer it wasn’t there.”

A considerable rise in the price of LNG could also cause a significant dent in Asian demand for LNG. “If the gas price increases too much,” Wang said, “I think we will move to another energy source.” According to Cho, South Korea is looking forward in the long term to a potential ground pipeline from Russia, should relations between North and South Korea dramatically improve.

While China and others have shouldered LNG’s higher prices in order to ensure progress on lessening pollution, it will always be a cost benefit analysis, Hobbs argued. “Governments in Asia put welfare generation—in other words economic growth and development—ahead of long-term decarbonization, and they always will.”