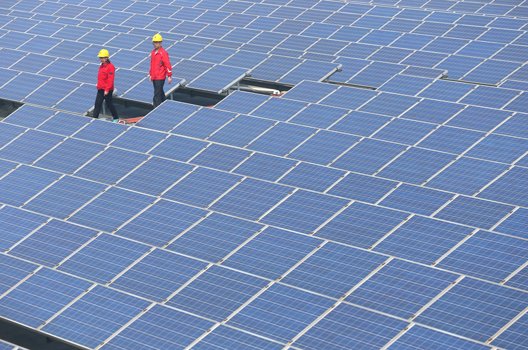 With commitments to clean energy and combatting climate change wavering under the new US administration, leadership in renewable energy is quietly shifting away from the United States across the Pacific, where China is rapidly building its dominance.

US President Donald Trump has been clear about his support for fossil fuels. Though his stance on renewable energy remains ambiguous, his comments about withdrawing from international climate agreements and his championing of the coal and oil industries suggest that the Trump administration may not be especially supportive of domestic wind and solar industries. While Trump may find the domestic advance of renewables hard to stop, the United States risks ceding its international leadership role in clean energy to China.

China has recently become the world’s largest producer of solar energy, and the portion of its energy mix occupied by solar now surpasses that of the United States. In January, the National Energy Administration of China announced substantial growth in solar photovoltaic (PV) capacity, adding 34.5 gigawatts (GW) of new capacity in 2016, up from a growth of 15 GW in 2015. The development of wind energy in China is also expanding rapidly, placing the country as the world’s leader in wind power “by a fairly large margin.” At 145 GW, China now has more capacity for wind power production than Europe or the United States. This growth in capacity has translated to a somewhat smaller growth in usage as wind farms have faced issues with grid integration, resulting in gluts of unused energy due to poor connections between suppliers and areas with high demand. State ambition has pushed forward a dramatic expansion in both capacity and usage, providing a massive surge in wind development that puts China on track to generate somewhere between a quarter and a third of its electricity from wind by 2030, according to a study published in Nature Energy.

In early January, Chinese officials announced a plan to invest $361 billion into renewable power generation by 2020. The Chinese government’s aggressive stance on renewable energy comes at a time when the United States seems poised to shift away from its historical pursuit of clean energy goals and international agreements on climate, and its engagement in the international order looks increasingly uncertain.

Nearly half of the $361 billion Chinese investment will be made in solar plants. The subsidies China has provided for its solar companies have helped bring the international costs of PV solar panels down dramatically in recent years as Chinese companies have contributed to advances in producing cheaper solar cells. According to Sam Geall, a research fellow for low-carbon innovation in China at the University of Sussex, five of the top six solar panel manufacturers and five of the top ten wind turbine manufacturers are Chinese.

However, China wants more than just more domestic clean energy—it also aims to dominate the production of clean energy technology worldwide. A report from the Institute for Energy Economics and Financial Analysis found $32 billion in Chinese overseas investments in renewables in 2016 when looking at investments of $1 billion or more, a jump of 60 percent since 2015. This makes China incredibly dominant in renewable energy, owning five of the world’s six largest solar-module manufacturing firms, the largest wind-turbine manufacturer, the world’s largest lithium ion manufacturer, and the world’s largest electricity utility. Four out of the five largest energy deals in 2016 were made by Chinese companies, according to Tim Buckley, director of energy finance studies for the Institute for Energy Economics and Financial Analysis.

China has a way to go toward adopting renewables in a large enough capacity to balance its carbon-heavy energy production—it is still the world’s largest producer of greenhouse gases and more than 70 percent of its electricity is generated from coal.

In the United States, the declining costs of renewables and the burgeoning US workforce employed in the industry makes it politically difficult for the federal government to dismiss them in favor of fossil fuels. Ultimately, Trump may be unable to ignore the importance of the wind and solar industries, and market forces mean they may not see much of a damper on the momentum of their growth, even with the cancellation of the Clean Power Plan and the abandonment of major Obama-era regulatory policies that favored clean energy.

Nevertheless, China now dominates the renewable energy space and is aggressively attempting to leverage its leadership as part of a broader search for international authority. Following Trump’s election on November 8, 2016, senior Chinese experts acknowledged that China would be able to assume climate leadership from the United States, and that this would allow China to “occupy the moral high ground” and increase its power and standing in global governance. In addressing one of the most urgent issues facing the global agenda, China will take a major position of authority in the international community. China is cementing its control of the clean energy sphere. The United States must decide whether it is willing to be left behind.

Madison Freeman is a project assistant with the Energy Diplomacy Initiative at the Atlantic Council. You can follow her on Twitter @madisoncfreeman.