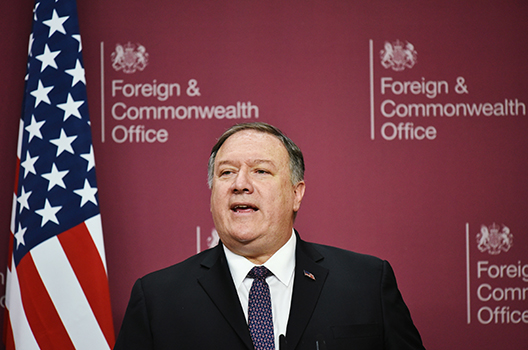 US Secretary of State Michael Pompeo has urged the United Kingdom not to give Chinese telecom giant Huawei a role in building its 5G telecommunications network warning that China wants to “divide Western alliances through bits and bytes, not bullets and bombs.”

In a speech in London on May 8, Pompeo also said US intelligence sharing relationships with its friends and allies are at stake. He stressed that “insufficient security will impede the United States’ ability to share certain information with trusted networks.”

In an address to the British think tank, Center for Policy Studies (CPS), Pompeo reiterated the US position that the use of Chinese technology carries grave risks as it could create a backdoor for the Chinese government to spy on US networks.

“We know that 5G is a sovereign decision — we respect every nation’s right to make its own choices — but it must be made in the broader context, the broader strategic context of China’s efforts throughout the world,” he said.

At an earlier press conference with British Foreign Secretary Jeremy Hunt, Pompeo maintained that he was “confident that each of our two nations will choose a path that will ensure the security of our networks.”

Hunt reiterated that “we have not made our final decision [on Huawei] as a government.”

“We are considering the evidence very carefully,” Hunt said. “But we would never take a decision that compromised our ability to share intelligence with our Five Eyes colleagues or in particular with the United States.”

Pompeo maintained that while this was a sensitive topic, “we have to talk about sensitive things as friends.” He challenged the United Kingdom that “as a matter of Chinese law, the Chinese government can rightfully demand access to data flowing through Huawei and ZTE systems. Why would anyone grant such power to a regime that has already grossly violated cyberspace? What can her majesty’s government do to make sure sensitive technologies don’t become open doors for Beijing’s spymasters?”

Pompeo also responded to the reports that Tehran is considering backing out of compliance with the nuclear deal—known as the Joint Comprehensive Plan of Action (JCPOA)—that saw Iran give up its nuclear program in return for sanctions relief. The Trump administration pulled out of the pact in 2018, but many European allies still believed that Tehran was still in compliance with the provisions of the treaty — a point that was verified by the United Nations’ nuclear watchdog. On May 8, Iranian President Hassan Rouhani announced that his government would begin selectively rolling back provisions of the deal, including beginning to grow stockpiles of heavy water and enriched uranium.

Hunt maintained that the United Kingdom remains committed to preserving JCPOA, but said that “today’s announcement from Tehran about its commitments under the deal is an unwelcome step.” He urged Iran “not to take further escalatory steps and to stand by its commitments.”

Hunt explained that “should Iran cease to observe its nuclear commitments, there would of course be consequences. For as long as Iran keeps its commitments, then so too will the United Kingdom.”

Pompeo did not explicitly respond to Tehran’s announcement, cautioning that Tehran may not actually take the steps Rouhani outlined. He did maintain that despite their different views on the utility of the JCPOA, “there is no daylight between” the United States and the United Kingdom “on the threat emanating from the Iranian regime.”

Pompeo acknowledged the difficulty the United Kingdom’s effort to exit the European Union, or Brexit, is causing the British political establishment but sought to assuage concerns that any potential scenario would have negative effects on the US-UK relationship. “No matter what happens, the United States will continue our strong relationship with both the United Kingdom and the EU,” he said.

Pompeo relayed that “President Trump is eager for a new free trade agreement that will take our number-one trade relationship to unlimited new heights,” should the United Kingdom leave the EU’s single market and be able to negotiate new trade pacts. In a direct contrast to former US President Barack Obama’s comments on Brexit, Pompeo promised that “when all is settled, you’ll be first in line for a new trade deal, not at the end of the queue.”

No matter what route is ultimately selected, Pompeo stressed, “our relationship has been amazing and strong before Brexit, and it will be strong after it.”