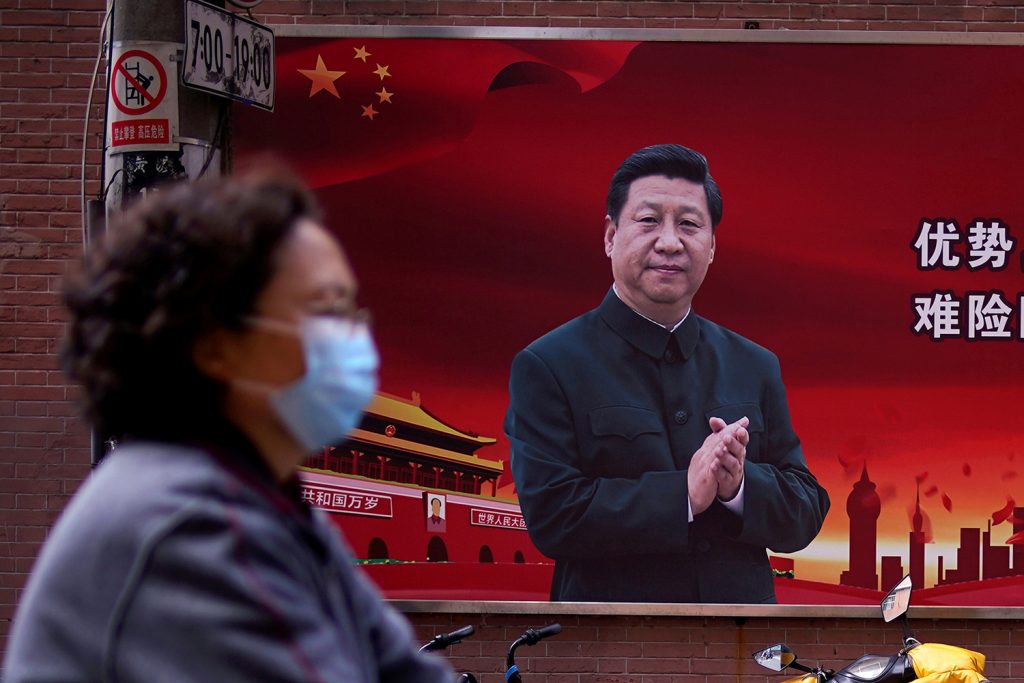 For the Chinese Communist Party (CCP), 2020 is a symbolic year. President Xi Jinping has referred to 2020, the final year in the county’s thirteenth Five-Year Plan, as a “crucial year for building a moderately prosperous society” (全面建成小康社會). At the same time, 2020 has also seen the outbreak of the coronavirus (COVID-19) in China’s Hubei Province. Internally, this epidemic has severely impacted China’s financial system and domestic economy. This comes at a time when external pressures, including the second phase of US-China trade negotiations, have further worsened China’s economic prospects. At this time of increasing uncertainty, the CCP is facing a severe test of its ability to prevent coronavirus from becoming a “black swan” that severely impacts its political stability and security.

The CCP’s organization is highly institutionalized, with decision-making authority split between various levels of the government. While the CCP has implemented a series of  measures aimed at preventing and controlling epidemics, including the “Law on Prevention and Treatment of Infectious Diseases (傳染病防治法, amended 2013),” the “Emergency Response Law (突發事件應對法, 2007),” the “Frontier Health and Quarantine Law (國境衛生檢疫法, revised in 1989),” and the “Public Security Administration Punishment Law (治安管理處罰法, 2006),” local governments and committees are responsible for dealing with crises and reporting to the CCP Central Committee. When COVID-19 was first discovered in Wuhan, Hubei Province at the end of December 2019, it was the local government and the Hubei Provincial Health Committee that were responsible for the control and treatment of the outbreak.

Under the CCP’s organizational culture of “count one’s blessings instead of unloading one’s problems (報喜不報憂),” local authorities have been required to use a high degree of political judgment when dealing with crises and deciding when to report them to the Central Committee. Ma Guoqiang (馬國強), the secretary of the Wuhan municipal party committee, explained in an interview with the central television network of the CCP that the relevant status of the outbreak was reported to the National Health Committee at the central level on December 31, 2019. However, until January 19, the Wuhan Municipal Health and Medical Committee (衛生健康委員會) still insisted that there was “no obvious human-to-human transmission” and “no medical infection.” On January 20, 2020, the Central Committee designated coronavirus as a “category B infectious disease,” and Hubei Province further adopted stricter disease control measures. Later, the Central Committee sent a team to Wuhan to conduct an investigation. To some extent, this indicates that the central government had been placing the responsibilities for epidemic control with local governments.

The CCP’s hierarchical authorization system ignores the fact that disease prevention cannot be divided by geographical boundaries and administrative regions. When Wuhan Mayor Zhou Xianwang (周先旺) was interviewed by China Central Television (CCTV) on January 27, he explained that according to the “Law on Prevention and Treatment of Infectious Diseases,” the Wuhan government needed to first report to the central government and obtain “authorization” before it could disclose relevant information to the public. Due to the lack of the CCP Central Committee’s unified handling of the situation and unclear policy instructions, local governments could not limit the movement of the large numbers of people traveling during the Chinese Lunar New Year. As a result, local cover-ups and national bureaucratic inefficiency also allowed COVID-19 to spread to other provinces in China and other countries around the world.

The Central Committee eventually set up an Anti-Epidemic Working Group (抗疫情工作小組) on January 25, chaired by Premier Li Keqiang (李克強). However, the members of the working group are all leaders in politics, propaganda, diplomacy, and stability maintenance. Compared with the members of the State Council for the Prevention and Control of SARS (全國防治非典型肺炎指揮部) set up in 2003, the 2020 Working Group does not feature any professional medical and health officials, reflecting the CCP ’s political lens for this crisis. Such a problem highlights the CCP’s bureaucratic emphasis on obeying organizational cultures established by the party’s central leadership, which creates a “governance crisis” in which the CCP lacks flexibility and emphasizes politics in a way that overrides professional medical analysis.

“National tackling” of a “humanitarian crisis”

The CCP’s “key programs for the nation” or “national tackling” (國家攻關) strategy focuses on leveraging the country’s resources to deal with major issues and achieve its intended goals. This strategy emphasizes “the spirit of storming the gate” (攻關精神) to overcome key problems. This is not only a slogan, but also an action code that highlights the Chinese government’s attempts to leverage speed, scale, and efficiency in response to key problems.

The CCP Central Committee downplayed the coronavirus epidemic until January 20, 2020, when Premier Li Keqiang presided over the State Council Executive Meeting (國務院常務會議) and officially referred to the prevention and control of a coronavirus epidemic, requiring all party and government units to address the situation. The announcement showed that the central government was officially handling COVID-19.

On January 21, the Office of Health Emergency (衛生應急辦公室) with the CCP’s National Health Commission (中共國家衛生健康委員會) officially released statistics on coronavirus infections, detailing confirmed cases reported in thirteen provinces. On January 22, the director general of the World Health Organization (WHO), Tedros Adhanom Ghebreyesus, confirmed that China had shared timely information on the coronavirus epidemic and had taken corresponding measures. On February 10, the CCP ’s official media, Xinhuanet (新華網), reported that President Xi had said that “party committees and governments at all levels must resolutely implement the CCP Central Committee’s decision-making arrangements on epidemic prevention and control, and resolutely win the people’s war (人民戰爭), general war (總體戰), and obstruction war (阻擊戰).” The official announcement of the fight against the epidemic is listed as a “key program for nation,” and the mobilization of all the resources of the state machine is intended to achieve the goal.

The model is best exemplified by the “two bombs and one satellite (兩彈一星)” project during Mao Zedong’s era in the 1960s, which included the development of a nuclear weapon, an intercontinental ballistic missile, and an artificial satellite. However, when the “national tackling” model of “condescending party paternalism (黨內家長制)” was applied to public health—in order to implement political discipline—the rigid bureaucratic system was implemented by mechanical and concerted orders. In the absence of sound mass media supervision and social accountability mechanisms, many human rights issues have arisen. Emphasizing the implementation of centralized orders and the “national tackling” method of exhausting all means to achieve a goal shows Chinese-style efficiency: “do the order right,” while sacrificing effectiveness.

Looking back on decades of medical and public health history in China, from leprosy prevention after 1949, SARS in 2003, and COVID-19 in 2020, a typical timeline emerges: deny the disease outbreak, Central Committee recognition, national tackling, and finally forced large-scale isolation. Meanwhile sick or suspected quarantine patients have collectively become victims under the slogan of national epidemic prevention.

In the book The Open Society and Its Enemies, British scholar Karl Popper examined the origin and development of historical determinism from the tradition of Western philosophy. Popper considered “The Republic” to be a kind of totalitarianism; a closed society which is considered utopian for its fear of change.

Under this concept, the CCP ’s vision of “Amazing China(厲害了我的國)” is similar to “The Republic” model. Beijing’s ideology encourages its citizens to worship the notion of “nation first” instead of “people oriented.” In order to implement the central political order and maintain social stability, citizens have been depersonalized, and the rapidly rising number of infections and deaths has been reduced to an abstract and callous statistic.

A “black swan” refers to an extremely rare event which could possibly severely impact the future. The rigid Chinese bureaucracy has blocked effective notification and control of the epidemic in the early stages, which has had a huge impact on China’s healthcare, society, and economy, and impacted other countries around the world. Everything is like what Xi Jinping described: “this is a people’s war(這是一場人民戰爭),” but the extreme lockdowns and temporarily-held epidemic prevention front in China could not stop the virus from spreading around the world. In order to regain the hearts of its people, the CCP not only continues to take economic measures to ensure stability in the short term, but to strengthen its dominance of public opinion. It also is trying to tighten the control of the media and the internet.

Economically, the CCP will continue to face obstacles from the US-China trade war, as well as a global economic crash, which will likely lead to sluggish China economic growth. Politically, the highly centralized party could not effectively handle the spread of the domestic epidemic, causing potential opposition forces to question Xi’s leadership. Socially, segregated life has undermined the foundations of mutual trust between people, and more and more people have begun to realize the importance of the free flow of information.

With these internal and external factors influencing each other, the spreading epidemic may have aggravated unrest and turmoil in Chinese society and partly damaged the CCP’s legitimacy. During the post COVID-19 era for China, these repercussions will be a political “black swan” for Xi’s administration in the near future.

Dr. Chang-Ching Tu is the Taiwan senior fellow in the Atlantic Council’s Scowcroft Center for Strategy and Security and assistant professor at the ROC (Taiwan) National Defense University.